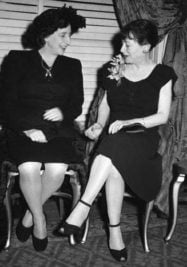 When it comes to women author’s friendships, it’s understood that the writers’ common struggles benefit from mutual support.  I wonder how much rivalry is involved, though, since writers can be an envious lot.

There are few templates for friendships between women writers, especially after one or both achieves some measure of success. Yes, there is mutual support. And yes, there is a measure of envy and rivalry.

This type of camaraderie has, and has always had, its delights as well as its complications. The well-known friendships between women who are now considered classic authors were no exception. 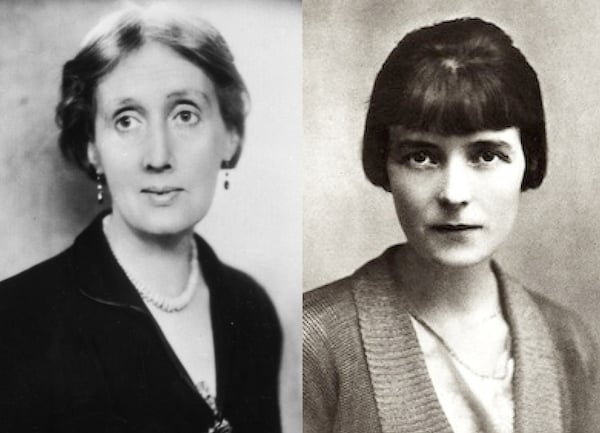 Literary mythology has often portrayed Virginia Woolf and Katherine Mansfield as bitter rivals, but they were close friends and, for the most part, mutually supportive writing colleagues.

The rivalry between the two brilliant writers served as inspiration to both, a spur to do better. Virginia said of Katherine, “I was jealous of her writing. The only writing I have ever been jealous of.”

In October 1917, Virginia Woolf recorded in her diary her first, decidedly mixed impressions of fellow writer Katherine Mansfield. Katherine “stinks like a civet cat that had taken to street walking,” she wrote. “In truth, I’m a little shocked by her commonness at first sight; lines so hard & cheap. However, when this diminishes, she is so intelligent & inscrutable that she repays friendship.” Read more … 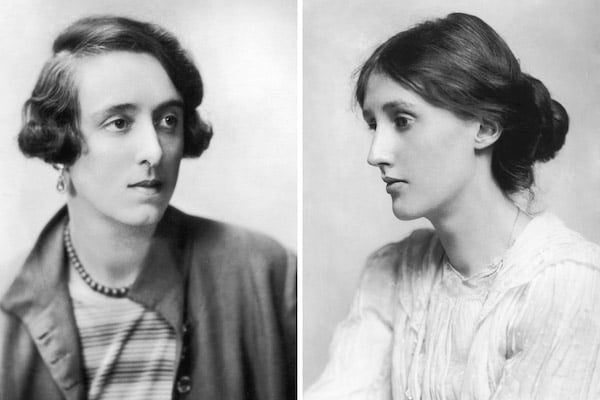 The relationship of Vita Sackville-West and Virginia Woolf has gone down in literary history, and even today it holds a fascination, epitomizing the allure of the unconventional, the bohemian, the slightly eccentric, and exotic.

On December 15, 1922, Virginia Woolf recorded in her diary that she had met “the lovely aristocratic Sackville-West last night at Clive’s. Not much to my severer taste … all the supple ease of the aristocracy, but not the wit of the artist.”

She was, of course, writing of Vita, the woman who would go on to become her lover, friend, and confidante. Their affair has inspired biographies, a West End play, and most recently, a 2019 film. But none have come close to capturing the vibrant nuances and dynamics of their personalities, or the subtleties of a relationship that was more emotional than physical and that lasted until Virginia’s death in 1941. Read more … 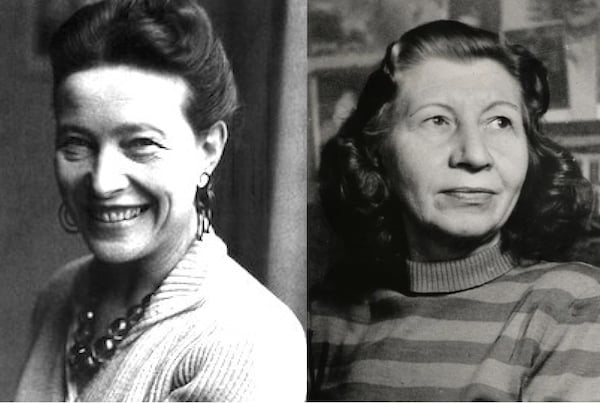 Simone de Beauvoir first met the French author Violette Leduc in 1945. At the time, de Beauvoir and her partner, Jean-Paul Sartre were the golden couple of Parisian intellectual circles, while Violette Leduc was a struggling writer mired in poverty.

Their first meeting, in the heady atmosphere of the Café Flore on the Left Bank, came only after Leduc had observed de Beauvoir and Sartre from a distance for several months, gathering the courage to introduce herself.

The resulting friendship seemed unlikely. Yet it lasted for several years, with mutual respect and admiration that survived Leduc’s unrequited attraction to de Beauvoir as well as the differing circumstances of the two women and their wildly diverging experiences of success. Read more …

Anne Sexton and Maxine Kumin were significant twentieth-century poets who provided deep friendship and support for one another as they developed and mastered their craft.

Kumin and Sexton met in 1957 when both women took a poetry workshop at the Boston Center for Adult Education. They had much in common — both were slender, dark-haired, and attractive; both came from upper-middle-class backgrounds; both lived in Newton, a wealthy Boston suburb; and both were married with children.

But the two women also differed in some ways. Sexton had never gone to college and had been told throughout her life that she was “dumb.” She was emotionally fragile. She had attempted suicide the year before and had been institutionalized for mental illness. Read more … 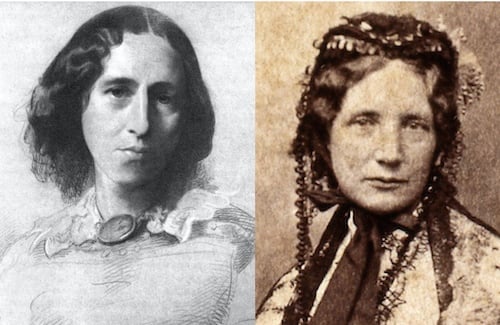 Mary Ann Evans, as she was born in 1819, did not always inspire friendship among fellow female novelists. Even before she found literary fame, the author better known by her pen name — George Eliot — was firmly entrenched in a London social circle that was unconventional, intellectual, and predominantly male.

There was also the matter of her “living in sin” with critic and philosopher George Henry Lewes – a state that kept many “respectable ladies” away from her front door. When Elizabeth Gaskell, for instance, wrote to Eliot to praise her fiction, she couldn’t help lamenting that “I wish you were Mrs Lewes,” and did not pursue a closer relationship.

Other women, though, were undeterred, including Harriet Beecher Stowe, the American author of Uncle Tom’s Cabin, . Having previously received a kindly message from the British writer, passed on by a mutual friend, the fifty-seven-year-old Stowe first wrote to Eliot in the spring of 1869. Read more … 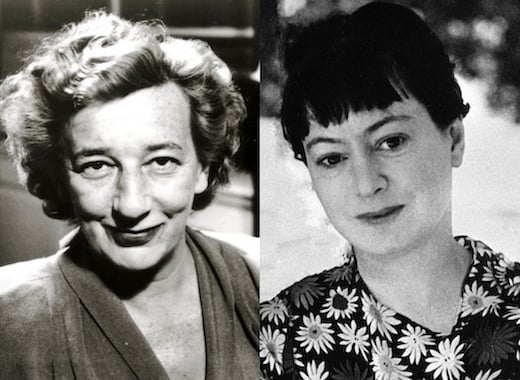 Lillian Hellman, the legendary American playwright, met Dorothy Parker, known for her brittle poetry and acid wit, in 1931. Hellman, not yet famous, was with her longtime partner Dashiell Hammett at a New York party when Parker approached the couple, fell to her knees, and kissed Hammett’s hand.

The scene made the couple uncomfortable, and Hellman never imagined she’d want to see Parker again, let alone befriend her. But when the two women met four years later, they clicked and became lifelong friends. In Hellman’s own words about her friendship with Dorothy Parker:

“It was strange that we did like each other and that never through the years did two such difficult women ever have a quarrel, or even a mild, unpleasant word. Much, certainly, was against our friendship: we were not the same generation, we were not the same kind of writer, we had led and were to lead very different lives, often we didn’t like the same people or even the same books, but more important, we never liked the same men.” Read more … 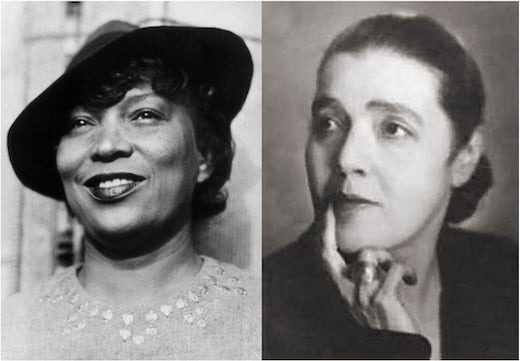 Zora Neale Hurston, the American novelist, memoirist, and folklorist was an active member of the Harlem Renaissance, an era of flourishing art and literature created by the black community in New York City. Fannie Hurst, her contemporary, supported social equality causes who became a wildly successful author of novels and short stories.

Hurst was incredibly successful as a novelist and story writer in the 1920s and 1930s, becoming one of the era’s top-earning authors. Through a strange twist of fate that Zora, who was virtually forgotten when she died in 1960, is now revered, widely read, and studied, while today Hurst is rarely read and little known.

Fannie Hurst and Zora Neale Hurston met at Opportunity Magazine‘s first literary awards banquet in May, 1925. At this event sponsored by the National Urban League, Hurst presented Hurston with prizes for her short story, “Spunk,” and her play, “Color Struck.” Read more … 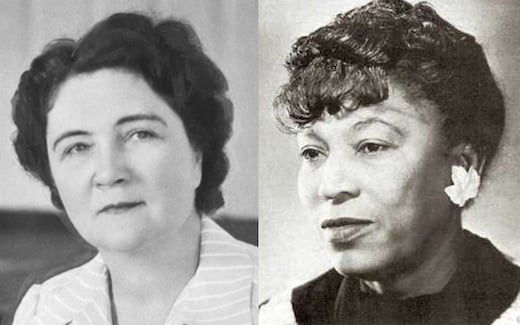 In the summer of 1942, Marjorie Kinnan Rawlings was invited to speak at historically Black Florida Memorial College in St. Augustine. One of the instructors that term was Zora Neale Hurston. At the time, Zora was completing her memoir, Dust Tracks on a Road, covering her childhood in Eatonville, Florida’s first all-black incorporated city.

Marjorie had just published Cross Creek, her memoir of the north-central Florida hamlet she had, fourteen years earlier, adopted as home.

The two women became acquainted, and when Marjorie returned to Castle Warden, the St. Augustine hotel her husband, Norton Baskin, owned and operated, she told him she’d “met the most wonderful woman.” Read more …