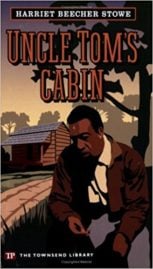 The first American book that claimed the distinction of “international best seller” was Uncle Tom’s Cabin by Harriet Beecher Stowe (1811 – 1896). Not only was she the first female author to achieve this milestone, but the first author ever. Here we’ll find out how she was inspired to write her most iconic work.

After the publication of Uncle Tom’s Cabin in 1852, no book sold faster right from the start. 1.5 million copies were sold worldwide by the end of its first year in print, and in the entire nineteenth century, only the Bible sold more copies.

The book not only helped change the course of history, but changed the business of publishing as it was known.

It may be overstating the case to claim, as some have, that the book helped to ignite the Civil War, though some historians do believe that this book laid the groundwork.

President Abraham Lincoln was quoted as saying when he met Stowe in 1862, “So you’re the little woman who wrote the book that made this great war!” This incident, or at least what the president said to the author,  may be a legend.

But what is considered true is that the book helped create a shift in pubic opinion about slavery. Esteemed poet Langston Hughes called it “America’s first protest novel.”

Harriet Beecher Stowe and her husband Calvin had seven children; one died very young. Compelled to supplement her husband’s meager income to support their growing family, she wrote anything and everything she could sell. This included sketches, poems, religious tracts—whatever might bring in a few extra dollars.

Living in Cincinnati from 1832 to 1850, the Stowes met escaped slaves from Kentucky and heard harrowing stories of lives. This was the impetus for Harriet’s desire use her talent to expose the horrors of slavery. Her sister-in-law, Isabella Jones Beecher, urged her to harness this talent:

“Now, Hattie, if I could use a pen as you can, I would write something that would make this whole nation feel what an accursed thing slavery is.” 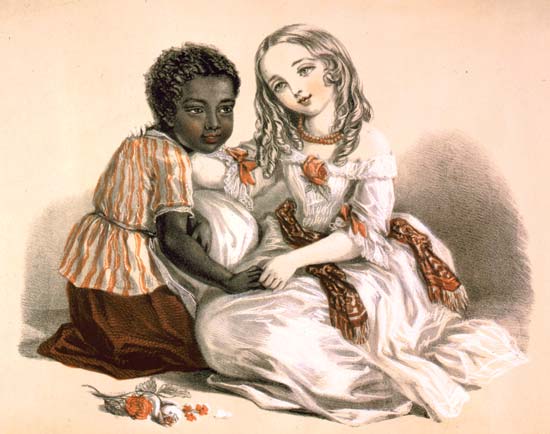 Losing a child gave her empathy

It could be argued that being a mother played a pivotal role in the inception of Uncle Tom’s Cabin. When she lost her beloved son Samuel Charles to cholera at age 18 months, the grief was crushing.

Later she claimed that this loss helped her empathize with slave mothers who whose children were torn from them to be auctioned off: It was at his dying bed that I learned what a poor slave mother may feel when her child is torn away from her.”

“I wrote what I did because as a woman, as a mother I was oppressed and broken-hearted, with the sorrows and injustice I saw, because as a Christian I felt the dishonor to Christianity — because as a lover of my country I trembled at the coming day of wrath.

Difficult to find time to write

The book Stowe longed to write was put off from one year to the next: “As long as the baby sleeps with me nights I can’t do much at anything, but I will do it at last.” At age 39, still in the midst of tending to her large family, Stowe found a way to create and disseminate the story she longed to tell, publishing monthly installments in an abolitionist newsletter.

The passing of the Fugitive Slave act of 1853 gave her the final push to write the story she so long to tell. Later she would say that she did not actually write it on her own, but merely took dictation from God. With each issue, public interest built.

Uncle Tom’s Cabin was published as a full book in 1853 and was an immediate success. Though opinions on the book’s literary merits vary widely, few historians dispute the importance of this book to the cause of abolition.

Staged versions appeared everywhere, and the book was just as much of a sensation in England as it was in the United States.

Pushback was swift and virulent, with anti-Uncle Tom publications hitting the shelves in droves. Here’s a newspaper advertisement for one such book, which purported to relate “The Real ‘Life of the Lowly'” by W.L.G. Smith. This ran in 1852 while the book was still being serialized: 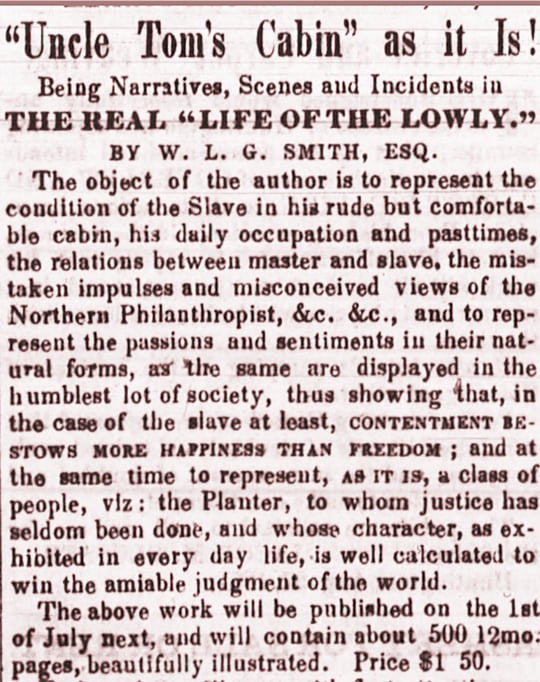 The review stated: “We never felt much sympathy for the extravagant admiration” conferred on that novel specifically, and on the social justice and slavery themes in Stowe’s work in general.

“To use novels as weapons of attack or defense is like giving foul blows in boxing. You may disable your antagonist, but you degrade yourself, and doubly degrade the supporters who applaud you.”

But the popularity of Uncle Tom’s Cabin, both at home and abroad, overruled critics’ objections. Through memorable fictional characters, this self-described “little bit of a woman … about as thin and dry as a pinch of snuff,” managed to shift public perception of slavery both at home and around the world.

Uncle Tom’s Cabin, though ever mired in controversy, remained in public consciousness for generations to come. And even though it’s generally not considered a masterpiece of writing, it remains an American classic nonetheless.