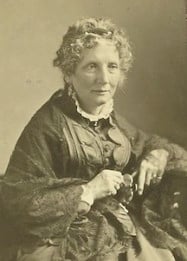 She grew up in a large, socially progressive family of ministers, authors, reformers, and educators who were well known in their time.

Among Harriet’s siblings were the prominent minister Henry Ward Beecher, and educator Catharine Beecher. She showed an early talent for writing and in her early twenties had a steadily paying profession, contributing articles to numerous publications.

In a plain home, in the town of Litchfield, Conn., Harriet Beecher was born on June 14, 1811. The house was full of little ones before her coming. She was the seventh child, while the oldest was but eleven years old.

Her father, Rev. Lyman Beecher, a man of remarkable mind and sunshiny heart, was preaching earnest sermons in his own and in all the neighboring towns, on the munificent salary of five hundred dollars a year. Her mother, Roxana Beecher, was a woman whose beautiful life has been an inspiration to thousands.

With an education superior for those times, she came into the home of the young minister with a strength of mind and heart that made her his companion and reliance.

So meagre was the salary for the increasing household, that Roxana urged that a select school be started; and in this she taught French, drawing, painting, and embroidery, besides the higher English branches. With all this work she found time to make herself the idol of her children. While Henry Ward hung round her neck, she made dolls for little Harriet, and read to them from Walter Scott and Washington Irving.

These were enchanting days for the enthusiastic girl with brown curls and blue eyes. She roamed over the meadows, and through the forests, gathering wild flowers in the spring or nuts in the fall, being educated, as she afterwards said, “first and foremost by Nature, wonderful, beautiful, ever-changing as she is in that cloudland, Litchfield.

Harriet’s mother died when she was only five, dealing a crushing blow to the large family. Her father remarried, and she eventually came to accept her stepmother. Her sister Catharine eventually started a school for girls in Hartford, and Harriet received her education there through her adolescence.

A working mother and writer yearns to do more

Harriet’s husband, Calvin Ellis Stowe was a biblical scholar and educator. The two were married in 1836 and for a time lived in Cincinnati, where they became abolitionists. Their home was a stop on the Underground Railroad. From Lives of Girls Who Became Famous:

Meantime the question of slavery had been agitating the minds of Christian people. Cincinnati being near the border-line of Kentucky, was naturally the battle-ground of ideas. Slaves fled into the free State and were helped into Canada by means of the Underground Railroad, which was in reality only a friendly house about every ten miles, where the escaping people could be secreted during the day, and then carried in wagons to the next “station” in the night.

Calvin Stowe was a firm supporter of her talents, but was no help in the household, and not much of a provider.

Struggling with divided loyalties, her assertion to her husband in this letter, “If I am to write, I must have a room to myself” neatly presages Virginia Woolf’s declaration that “a woman must have money and a room of her own if she is to write fiction.”

Harriet Beecher Stowe sold anything and everything (sketches, poems, religious tracts, etc.) she could to support her growing family, since her husband was a poor clergyman. Though she bore seven children and struggled in genteel poverty, she found a way to write for profit and purpose. Still, there were always conflicting feelings. In 1841 she wrote to her husband:

“Our children are just coming to the age when everything depends on my efforts. They are delicate in health, and nervous and excitable and need a mother’s whole attention. Can I lawfully divide my attention by literary efforts?”

The book Stowe longed to write “to make this whole nation feel what an accursed thing slavery is” was put off from one year to the next:

“As long as the baby sleeps with me nights I can’t do much at anything, but I will do it at last.”

At age 39, still in the midst of tending to her large family, Stowe found a way to disseminate the story she longed to tell, publishing monthly installments of Uncle Tom’s Cabin in an abolitionist newsletter. With each issue, public interest built. 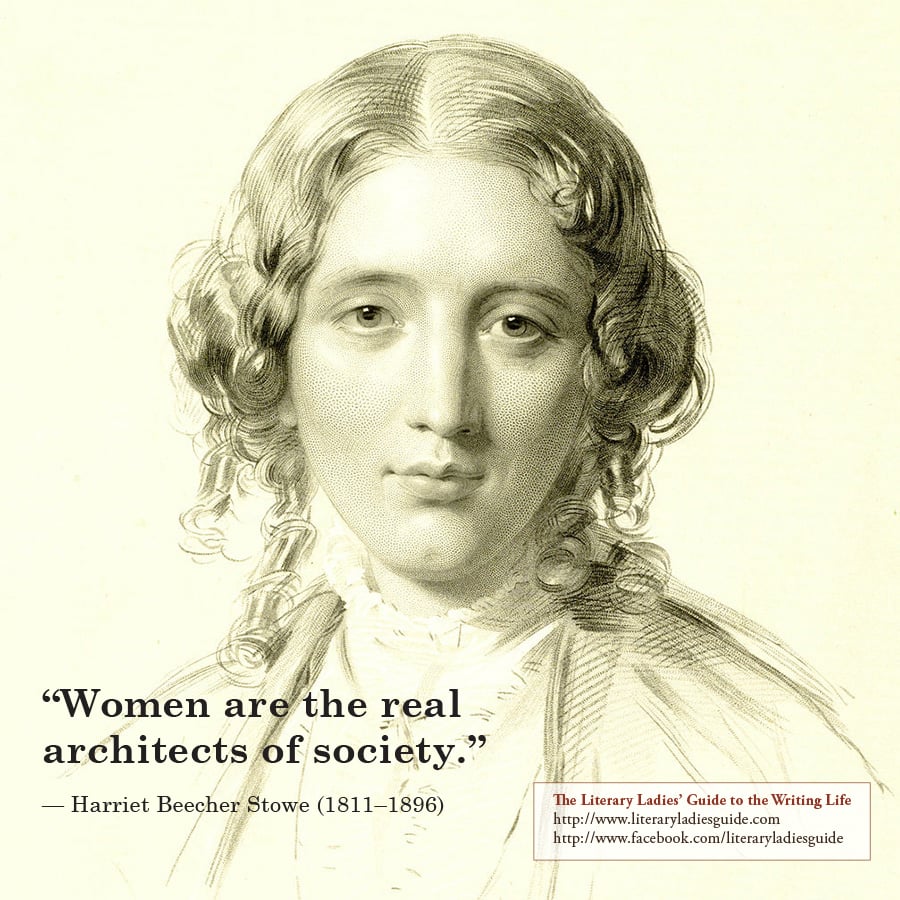 However much Stowe longed for money and privacy, it could be argued that being a mother played a pivotal role in creating her magnum opus, Uncle Tom’s Cabin.

When she lost her beloved son Samuel Charles to cholera at age eighteen months, the grief was crushing. Later she claimed that this loss helped her empathize with slave mothers who whose children were torn from them to be auctioned off. She wrote in an 1853 letter:

Meeting escaped slaves while living in Cincinnati and hearing about their plights was another impetus for Harriet’s desire to use her talent to give slavery a human face, and expose its injustice.

The passing of the Fugitive Slave act of 1853 gave her the final push to write the story she so long to tell. Later she would say that she did not actually write it on her own, but merely took dictation from God.

Once again, from Lives of Girls Who Became Famous, the initial reaction not only of Harriet, but the public and fellow authors:

Uncle Tom’s Cabin was published March 20,1852. Then came the reaction in her own mind. Would anybody read this book? The subject was unpopular. It would indeed be a failure, she feared, but she would help the story make its way if possible.

She sent a copy of the book to Prince Albert, knowing that both he and Queen Victoria were deeply interested in the subject; another copy to Macaulay, whose father was a friend of Wilberforce; one to Charles Dickens; and another to Charles Kingsley. And then the busy mother, wife, teacher, housekeeper, and author waited in her quiet Maine home to see what the busy world would say.

In ten days, ten thousand copies had been sold. Eight presses were run day and night to supply the demand. Thirty different editions appeared in London in six months. Six theatres in that great city were playing it at one time. Over three hundred thousand copies were sold in less than a year.

Letters poured in upon Mrs. Stowe from all parts of the world. Prince Albert sent his hearty thanks. Dickens said, “Your book is worthy of any head and any heart that ever inspired a book.” Kingsley wrote, “It is perfect.” The noble Earl of Shaftesbury wrote, “None but a Christian believer could have produced such a book as yours, which has absolutely startled the whole world …

I live in hope — God grant it may rise to faith!–that this system is drawing to a close. It seems as though our Lord had sent out this book as the messenger before His face to prepare His way before Him.” He wrote out an address of sympathy “From the women of England to the women of America,” to which were appended the signatures of 562,448 women. These were in twenty-six folio volumes, bound in morocco, with the American eagle on the back of each, the whole in a solid oak case, sent to the care of Mrs. Stowe.

The learned reviews gave long notices of Uncle Tom’s Cabin. Blackwood said, “There are scenes and touches in this book which no living writer that we know can surpass, and perhaps none can equal.”

Stowe became the first American author whose book could claim the distinction of being an international best seller. After the publication of Uncle Tom’s Cabin in 1852, no book sold faster right out of the gate. 1.5 million copies were sold worldwide by the end of its first year, and in the entire nineteenth century, only the Bible sold more copies.

The book not only helped change the course of history, but changed the business of publishing as it was known.

It may be overstating the case to claim that the book helped to ignite the Civil War, though some historians do believe that this book helped lay the groundwork. President Abraham Lincoln was quoted as saying when he met Stowe in 1862, “So you’re the little woman who wrote the book that made this great war!”

This incident, or at least what the president said to the author, may be a legend. But what is considered true is that the book helped create a shift in pubic opinion about slavery.

There was also a swift and serious backlash from slavery apologists as well as theatrical adaptations. Though the public — both in the U.S. and England — bought the book in droves, critics weren’t always kind to the book.

Having struggled financially in all her married life, Stowe was amazed by the income she received from the sale of Uncle Tom’s Cabin, telling a friend and fellow abolitionist in an 1853 letter:

“You ask with regard to the remuneration which I have received for my work here in America. Having been poor all my life and expecting to be poor the rest of it, the idea of making money by a book which I wrote just because I couldn’t help it, never occurred to me. It was therefore an agreeable surprise to receive ten thousand dollars as the first-fruits of three month’s sale. I presume as much more is now due.” 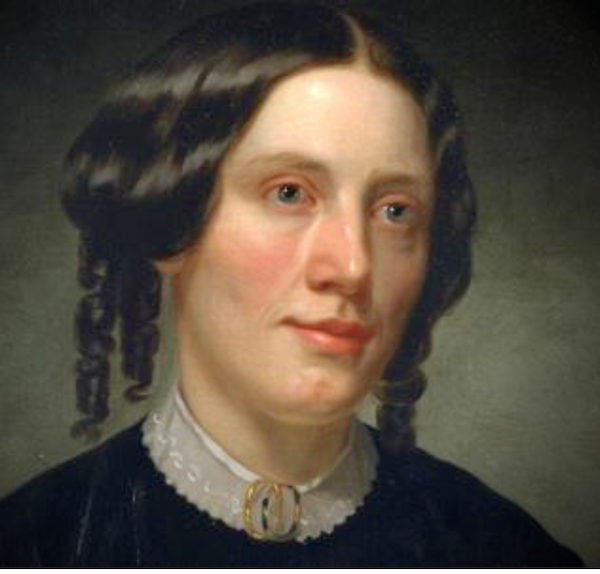 Stowe suffered devastating losses as a mother. Aside from the aforementioned Samuel Charles, another son drowned while attending college at age 19. A third son, having returned whole from serving for the Union in the Civil War, moved to San Francisco and went missing, never to be heard from again.

Stowe continued to write novels (Dred, The Minister’s Wooing, Oldtown Folks, and The Pearl of Orr’s Island) as well as essays and articles. Though the literary merits of her work have long been debated, there is little dispute that Uncle Tom’s Cabin caused a major shift in public perception of slavery.