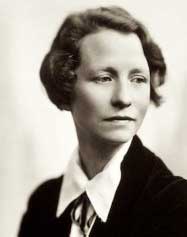 Edna St. Vincent Millay (February 22, 1892 – October 19, 1950) was an American poet long regarded as a major twentieth-century figure in the genre. Wildly popular in her lifetime, she’s no longer as widely read and studied, though still well regarded in the field of poetry.

Her middle name really was an homage to the New York City’s St. Vincent’s hospital, where the life of an uncle was saved before she was born. After her parents were divorced, there was minimal contact with their father. Her mother, Cora, was frequently away from home, on the road as a visiting nurse and itinerant hairdresser.

Edna and her sisters Norma and Kathleen were raised near coastal Maine by their single mother, who taught them to value independence and appreciate literature, visual art, and music.

The sisters were often left to their own devices, and made the best of the situation, turning their tasks into games. Edna’s forays into make-believe grew into a penchant for acting, which she did often and enthusiastically from childhood through her college years.

Encouraged by her mother, Edna (who was more often called “Vincent” in her youth) immersed herself in great works of literature from an early age. She read Shakespeare, Keats, Longfellow, Shelley, and Wordsworth.

At age of sixteen she compiled a dozen or so poems into a copybook and presented them to her mother as “Poetical Works of Vincent Millay.” The poems were mainly sonnets, a form that she would favor throughout her life as a poet.

In 1912, encouraged by her mother, 19-year-old Edna sent her poem, “Renascence” to The Lyric Year, a magazine that held a yearly poetry contest and published winning entries.

The narrator of the poem writes from a mountaintop from which she observes the broad vista. Its lines consider human suffering and death, and after a refreshing rain, the narrator is once again able to experience joy and a rebirth of life — thus the title, “Renascence.”

The poem was accepted and included in the collection. Though it took only fourth place (causing quite a scandal), it caught the attention not only of readers who felt Edna was robbed of the top prize, but of Caroline Dow, a wealthy patron of the arts.

Taken with Edna’s passion for poetry, Dow arranged to pay her tuition to attend Vassar College. Edna would otherwise not have been able to afford college. 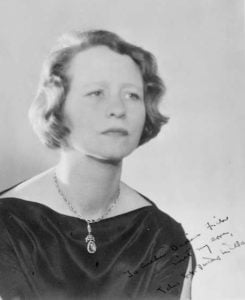 Edna entered college at age 21, and soon became aware of her power to attract, and used this to her advantage. According to J.D. McClatchley, editor of Edna St. Vincent Millay: Selected Poems (2002):

“‘People fall in love with me … and annoy me and distress me and flatter me and excite me.’ And she responded in kind; there were torrid affairs with girls at school, adding to her campus notoriety, and tepid flings with older men who might help her career. Throughout her life, she did what she felt she must do in order to create the conditions necessary to accomplish her work.

After Vassar, she became the Circe of Greenwich Village. She was soon the talk of the town. She drank and partied and had affairs, and thereby was the envy of all, and to young women in particular she was the free spirit that American Babbitry had stifled.

Her affairs were sometimes of the heart, and sometimes more practical. The writers she took as lovers (and invariably kept as friends afterward) … were in a position to both teach and help her. And she had always been a quick study. The poems she wrote then — wild, cool, elusive — intoxicated the Jazz Babies. She had found the pulse of the new generation.”

My candle burns at both ends;
It will not last the night;
But ah, my foes, and oh, my friends —
It gives a lovely light! 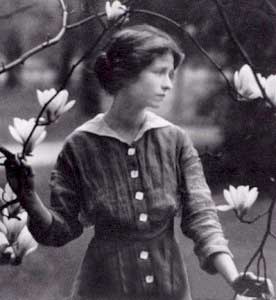 An outpouring of poems; a feminist slant

A Few Figs from Thistles, her first major collection (1921), explored, among other themes, female sexuality. Second April (also 1921) dealt with heartbreak, nature, and death — the latter being a topic she explored often.

It’s rare for a poet to attain what we now call superstar status, but that’s just what Edna achieved. Throughout the 1920s — call them Roaring or the Jazz Age — she recited to enthusiastic, sold-out crowds during her many reading tours at home and abroad.

Interspersed were head-spinning numbers of love affairs with both men and women. Edna was open about her bisexuality, which was unusual for the time.

In Europe, she posed for surrealist photographer Man Ray and dined with the artist Constantin Brancusi. It was a heady time indeed, and the candle she burned at both ends was still glowing.

Pulitzer Prize and an unconventional marriage

In 1923, Edna won the Pulitzer Prize for poetry for her fourth volume of poems, The Ballad of the Harp-Weaver. She was only the second person to receive a Pulitzer for poetry, and the first woman to win the prize.

That year, Edna also embarked on an unconventional marriage with Eugen Jan Boissevain. The handsome Dutch importer was a kindhearted man twelve years her senior, and Edna married him when, as her erstwhile lover Edmund Wilson saw it, “she was tired of breaking hearts and spreading havoc.”

Boissevain provided the support and stability Edna needed for her writing. But she wasn’t one to settle down, after all. Both she and her husband took other lovers throughout their marriage.

Boissevain completely supported her career, even taking on many domestic duties and organizing their social life at the country home they purchased together, a 700-acre farm called Steepletop in Austerlitz, NY. 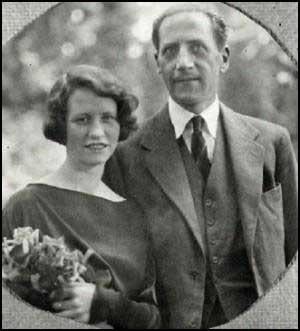 Edna didn’t shy away from political causes. Her New York Times obituary describes her protest against the famed Sacco and Vanzetti affair:

“In the summer of 1927 the time drew near for the execution of Nicola Sacco and Bartolomeo Vanzetti, Boston Italians whose trial and conviction of murder became one of the most celebrated labor causes of the United States. Only recently recovered from a nervous breakdown, Miss Millay flung herself into the fight for their lives.

A poem which had wide circulation at the time, ‘Justice Denied in Massachusetts,’ was her contribution to the fund raised for the defense campaign. Miss Millay also made a personal appeal to Governor Fuller.

In August she was arrested as one of the “death watch” demonstrators before the Boston State House … ‘I went to Boston fully expecting to be arrested — arrested by a polizia created by a government that my ancestors rebelled to establish,’ she said, when back in New York.

‘Some of us have been thinking and talking too long without doing anything. Poems are perfect; picketing, sometimes, is better.’” 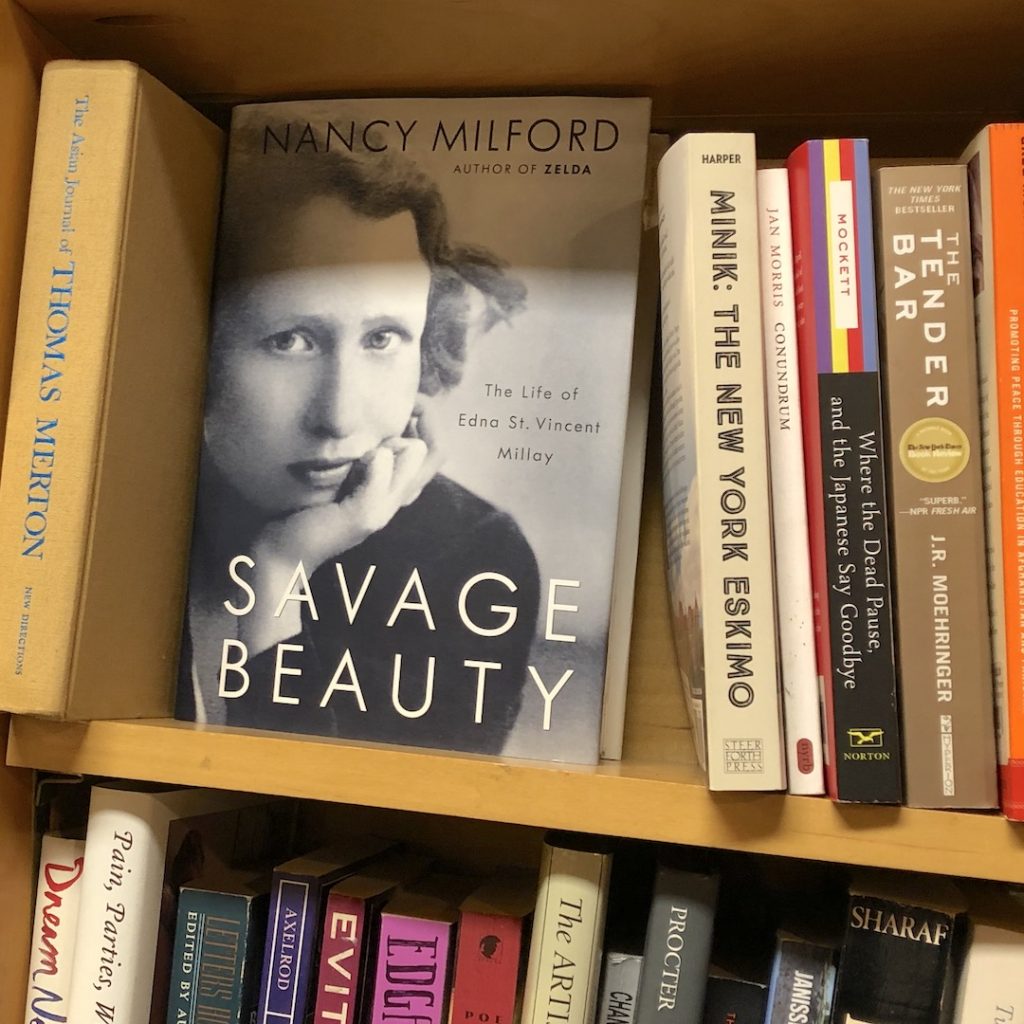 Edna continued to push boundaries in her writing and her personal life. Her anti-war play Aria da Capo was performed to sell-out crowds on Cape Cod by the Provincetown Players.

Her obsession with the shy young poet, George Dillon, who was gay, inspired one of her finest volumes of poetry, Fatal Interview. Published in 1931, it sold a stunning 50,000 copies in the first months of publication, a rarity for a book of poems, and during the Great Depression, at that.

Edna seemed to need to create chaos to thrive. According to literary critic J.D. McClatchley:

“Millay spared no one — least of all herself — in her drive to create the kind of ‘havoc’ her poems feed on, and then to surround herself with the solitude to work that chaos into shimmering lines … Scandal, of course, only enhanced her celebrity … For women, she made complicated passion real; for men, she made it alluring.”

Life had becoming more fraught for the free-spirited poet as she reached middle age. While in Florida on working vacation with her husband, she was completing a manuscript for a new collection, Conversations at Midnight.

Their hotel burned down and the manuscript was destroyed. In 1936, she was involved in a car accident that left her in such chronic pain that she became dependent on painkillers.

She was crushed when Eugen Boissevain died suddenly in 1949. The next year, she sat alone in their home, Steepletop, with a bottle of wine at the top of a staircase. She tumbled down the stairs, broke her neck, and died. It has been speculated that this may have been precipitated by a heart attack.

Edna St. Vincent Millay was 58 years old and left a body of work that included some fifteen poetry collections, several plays, and many political writings.

From Edna St. Vincent Millay: Selected Poems (Library of America, 2002), J.D. McClatchy, the volume’s editor, offers this assessment of her legacy, helping to understand why she is no longer widely read.

He begins, “If literary historians can agree on anything, it’s that the road to hell is often paved with good reviews. At the start of her career, Edna St. Vincent Millay’s reviews were astonishing. By 1912, when she was just eighteen, she was already famous. When, five years later, her first book appeared, she was launched on a rushing current of acclaim.”

And by the end of her life, good reviews, McClatchy concludes, were merely dutiful:

“Of all the critical barbs aimed at Millay’s poems over the years, few have not had real targets. Still, two dozen of her poems can stand among the best lyrics of the twentieth century, and all of her work urges re-discovery. In a sense, it was her misfortune to write at a time when the tide had turned in favor of the modernists, who felt as T.S. Eliot did when he wrote that “no artist produces great art by a deliberate attempt to express his own personality.”

Millay wrote from the bedroom, not the library. Eliot and Pound were expansionists, broadly addressing themselves to culture and ideas. Millay, on the other hand, wrote of private life, domestic scenes …

After her death, fashions again changed. The confessional poets flayed the lyric to reveal garish details Millay’s decorum would have instinctively avoided. And all along, though she was never forgotten by poets (Sylvia Plath and Anne Sexton studied her with admiration), critics eager to extol the skewed obliquities of the modernists or the “authenticity” of the plain-speaking nativists ignored Millay …

The neglect has kept us from a poet of genuine strength. Millay’s emotional range may seem narrow, and her technique often limited to exquisite feelings dipped in bitter irony … And often because of these self-imposed restraints, Millay could write poems with an obsessed, haunting power — her sonnets especially, each a silver cage for the melancholy, winged god of love — poems that expose the banalities of more burly or experienced styles, and continue to touch the heart, disturb the intelligence, and lodge in the memory.” 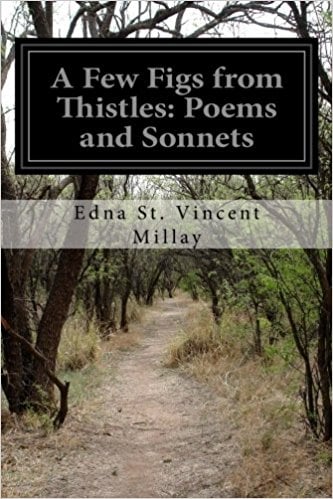 Steepletop and the Millay Colony

A number of years after her death, the state of New York acquired a great portion of the acreage of Steepletop, and the funds were used to establish The Millay Colony for the Arts.

Today, this center offers residencies for writers and other creative artists, and has a museum dedicated to Millay’s life and work, as well as garden trails and her gravesite. Steepletop, as of 2019, has been closed to the public