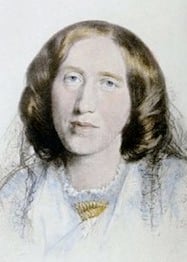 Her writing was politically and socially driven, with characters that are small-town individuals, some free thinkers, each with great psychological depth.

Eliot is also recognized for her interest in and knowledge of the visual arts. Her surviving journals and other writings contain information on trips to museums and a collection of her thoughts and emotions connected to the artworks she viewed.

Sarah K. Bolton, in her 1914 book Lives of Girls Who Became Famous, observed:

“What made her a superior woman? Not wealthy parentage; not congenial surroundings. She had a generous, sympathetic heart for a foundation, and on this she built a scholarship that even few men can equal. She loved science, and philosophy, and language, and mathematics, and grew broad enough to discuss great questions and think great thoughts. And yet she was affectionate, tender, and gentle.”

The daughter of a land agent, Eliot was from an early age intellectually curious. Deeply religious when young, she later broke with the Church, though she remained strongly moralistic through her life. Her father left her with enough money to pursue her literary interests comfortably secure upon his death in 1849.

“At the age of thirteen, Eliot attended school in Coventry, near the Staffordshire village where she was born. An exemplary student, she studied foreign languages, philosophy, theology, and literature.

In her early twenties, she made the acquaintance of Charles Bray, a Coventry manufacturer who espoused the radical, free-thinking rhetoric of the day — an intriguing concept for the philosophically-minded Marian.

For many years, she corresponded with Harriet Beecher Stowe, the American author of the best-selling Uncle Tom’s Cabin, about how best to integrate writing into a domestic life.

… Men exerted powerful influences over Eliot’s life. In 1850, while working as an editor at the Westminster review, she fell in love with publisher John Chapman. Her passion was unrequited, despite the fact that she lived for a time in Chapman’s home.

She befriended Ivan Turgenev, the Russian novelist and playwright, and explored Positivism, the psychological, self-revelatory fashion of the day.

George Henry Lewes, who would become her longtime companion, urged her to hone her writing skills by reading the works of Jane Austen.

One spring holiday, on the island of Jersey, she read the entire novel Emma out loud to him. Eliot in turn helped Lewes with his research, and after his death completed his most important work on psychology, Problems of Life and Mind. “ 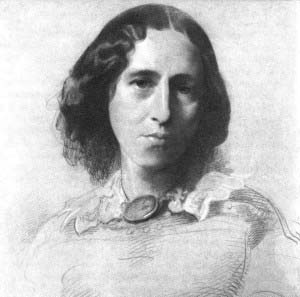 A contented childhood, a stellar student

“Mary Ann Evans was born in November, 1819, at Arbury Farm, a mile from Griff, in Warwickshire, England. When four months old the family moved to Griff, where the girl lived till she was twenty-one, in a two-story, old-fashioned, red brick house, the walls covered with ivy.

The father, Robert Evans, a man of intelligence and good sense, was bred a builder and carpenter, afterward becoming a land-agent for one of the large estates. The mother was a woman of sterling character, practical and capable.

For the three children, Christiana, Isaac, and Mary Ann, there was little variety in the commonplace life at Griff. Twice a day the coach from Birmingham to Stamford passed by the house, and the coachman and guard in scarlet were a great diversion.

Mary Ann was an affectionate, sensitive child, fond of out-door sports, imitating everything she saw her brother do, and early in life feeling in her heart that she was to be ‘somebody.’

At five, the mother being in poor health, the child was sent to a boarding-school with her sister, Chrissy, where she remained three or four years. The older scholars petted her, calling her “little mamma.” At eight she went to a larger school, at Nuneaton, where one of the teachers, Miss Lewis, became her life-long friend.

The child had the greatest fondness for reading, her first book, a Linnet’s Life, being tenderly cared for all her days. Aesop’s Fables were read and re-read. At this time a neighbor had loaned one of the Waverley novels to the older sister, who returned it before Mary Ann had finished it.

Distressed at this break in the story, she began to write out as nearly as she could remember, the whole volume for herself. Her amazed family re-borrowed the book, and the child was happy. The mother sometimes protested against the use of so many candles for night reading, and rightly feared that her eyes would be spoiled.

At the next school, at Coventry, Mary Ann so surpassed her comrades that they stood in awe of her, but managed to overcome this when a basket of dainties came in from the country home. In 1836 the excellent mother died.

Her love for books increased. She engaged a well-known teacher to come from Coventry and give her lessons in French, German, and Italian, while another helped her in music, of which she was passionately fond. Later, she studied Greek, Latin, Spanish, and Hebrew.

Shut up in the farm-house, hungering for knowledge, she applied herself with a persistency and earnestness that by-and-by were to bear their legitimate fruit. That she felt the privation of a collegiate course is undoubted. She wrote much later in Daniel Deronda: ‘You may try, but you can never imagine what it is to have a man’s force of genius in you, and yet to suffer the slavery of being a girl.'”

Notoriety from “living in sin”

Upon completing her formal education, Mary Ann began doing translation, which she found to be deeply wearying work, and continued to learn about a variety of subjects by reading voraciously. She had the opportunity to observe life by traveling abroad for some time as well.

“On her return to England,” wrote Sarah K. Bolton,  “she visited the Brays, and met Mr. Chapman, the editor of the Westminster Review, and Mr. Mackay, upon whose Progress of the Intellect she had just written a review.

Mr. Chapman must have been deeply impressed with the learning and ability of Miss Evans, for he offered her the position of assistant editor of the magazine —a most unusual position for a woman, since its contributors were Froude, Carlyle, John Stuart Mill, and other able men.”

Not long after moving to London, now in her thirties, Mary Ann began working with the Westminster Review. There, in 1854, she met George Henry Lewes, an editor who would become her mentor and romantic companion. They lived as husband and wife until his death in 1878, though he was already married; his religion prevented him from divorcing.

This caused her a great deal of notoriety, as doing so was considered quite sinful in that time and social milieu. This was in part why she chose to write under a pseudonym; she worried that her relationship with Lewes, considered so scandalous, would discourage readers from her writings. In addition, she assumed her masculine nom de plume because she believed women’s writing to be undervalued.

Her relationship with Lewes caused a rift with her family, particularly with her brother Isaac, with whom she had been close.

It may have been supposed that Lewes was to Eliot what the fictional Casaubon was to Dorothea Brooke in Middlemarch, a kind of literary pedant. Eliot, in fact, had to answer to this implication to Stowe, explaining to her gently disapproving colleague in a letter that Lewes was nothing like Casaubon, and indeed an excellent partner.

“September 1856 made a new era in my life, for it was then I began to write fiction,” she declared. It was Lewes who encouraged Eliot to write novels, and from the start, they were critically acclaimed and sold well. From Adam Bede (1859), her first novel, through Daniel Deronda (1876), her last, this marked a time when George Eliot was at her most productive.

These books, along with The Mill on the Floss, Silas Marner, Romola, and Middlemarch, are considered some of the finest and most important literary works in British literature. Virginia Woolf said of Middlemarch that it was “one of the few English novels written for grown-up people.”

In addition to these and other novels, Eliot also wrote numerous poems, short stories, translations, and essays.

Replacing the Brontës as a model for American women writers

According to Elaine Showalter, author of A Jury of Her Peers:

“By 1870, George Eliot had replaced Charlotte Brontë as the most admired and influential British novelist in the United States, and Eliot’s intellectualism and literary ambitions had replaced the passionate spontaneity and gothic plots of the Brontës as a model for American women writers.

Middlemarch, her 1871 – 72 novel about the ardent intellectual Dorothea Brooke, who can only realize her ambitions vicariously through consecutive marriages to dried-up pedant Casaubon and the handsome young politician Will Ladislaw, became the iconic text of the postbellum period.

Harriet Beecher Stowe was reading it avidly in 1972, and seeing in it a fable of the exceptional woman in an ordinary community.” 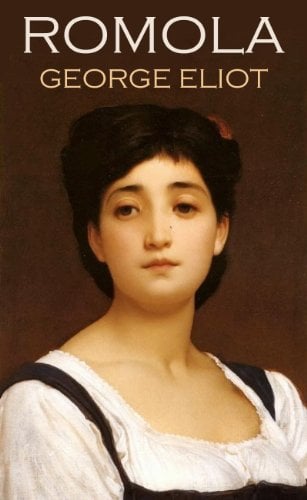 Eliot was married in 1880 to John Cross (20 years her junior), who had been her friend and financial adviser. The marriage was not a happy one, but because she was finally legitimately married at age 60, her brother Isaac forgave her.

The marriage was to last only seven months; after a brief illness later that same year, Eliot died at the age of 61. By then, she was already recognized as one of the greatest British novelists of the day.

Eliot was mourned on both sides of the Atlantic Ocean. Her death, for other women authors of the era, seemed to symbolize that a great literary era had passed.

And yet, as Elaine Showalter theorized in A Jury of Her Peers, they were on some level “relieved that so formidable a literary rival was gone,” and that women writers viewed her passing as “the exorcism of an oppressive ghost.”