The Betsy-Tacy Books by Maud Hart Lovelace: An Appreciation 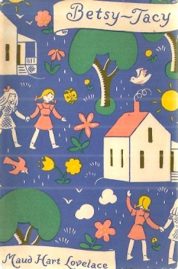 Revisiting the Deep Valley novels by Maud Hart Lovelace (1892 – 1980) during the winter holiday season is a particular delight, though this American author’s stories can be enjoyed year-round. Perhaps better known as the Betsy-Tacy books, the themes celebrated in these nostalgic novels for young readers are universal: friendship, devotion, love of home, ambition, and comfort.

Though the novels were published in the 1940s, they take place in the early years of the twentieth century, when the author herself was growing up. As young girls, her well-known heroines—Betsy, Tacy, and Tib—have ten cents to spend on Christmas shopping. As they grow up, in Betsy and Joe (1948), for instance, they have “real shopping” to do, but their trip downtown is as “heavily weighted with tradition as a Christmas pudding with plums.”

They visit every store (including Cook’s Book Store) and price “everything from diamonds to gumdrops, and bought, each one, a Christmas tree ornament … savoring Christmas together all up and down Front Street.” It’s a simple and comforting ritual.

Maud Hart Lovelace’s Betsy-Tacy books were based on her experiences growing up in Mankato, Minnesota. The Betsy-Tacy Companion by Sharla Scannell Whalen even contains a helpful chart that displays the names of the novels’ main characters alongside their real-life corollaries. But the enduring appeal of this series rests as much with their invented elements as their real-life, autobiographical links. 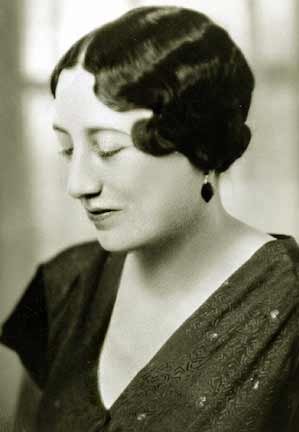 In real life, Betsy is Maud Hart Lovelace, the author herself. Tacy is Anna Anastacia’s nickname; she was based on Maud’s friend Frances ‘Bick’ Kenny. They meet at Betsy’s (and Maud’s) fifth birthday party.

In Betsy-Tacy (1940), they decorate eggs for Easter, with the help of older sisters Julia and Katie. They walk to school together every morning, even when it’s so cold and snowy that their hands ache inside their mittens.

They dream of buying the chocolate-colored house, when they earn two nickels—but eventually, Tib moves in. The actual chocolate-colored house was much like Tib’s house (Tib was based on Maud’s friend Midge Gerlach), except that there was no tower, and in this volume, there’s no Tib, either. (Another neighborhood house did have a tower though. Wasn’t it Toni Morrison who said that one must write the stories one yearns to read? One must write about houses with towers, too, then.)

Betsy and Tacy accommodate Tib, naturally. In Betsy-Tacy and Tib (1941), the girls are eight years old and fast friends: “Tib was always pointing things out. But Betsy and Tacy liked her just the same.” This allows readers to adjust to Tib’s presence, to create a space for her, just as the other girls do.

Tib is the smallest and, arguably, the sharpest. She is also the best at flying, as the girls come to learn. Because even though it was Betsy’s idea, Betsy invents a story to tell, rather than take the plunge like the other two girls did (reluctantly but determinedly). Even so, the friends are inseparable. 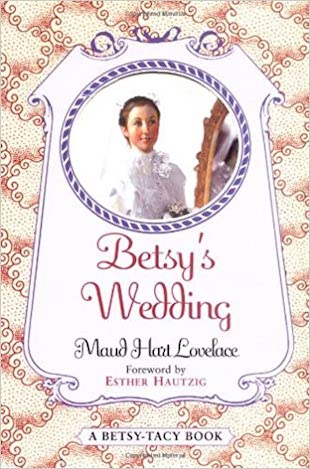 Beyond the celebrated central friendship between the three girls, there are other sustained friendships. For instance, between Betsy’s and Tacy’s older sisters, and the friendships between the principle girls and certain neighborhood boys (some of whom—like Cab Edwards—remind me of Laurie in Louisa May Alcott’s Little Women stories). Friendship almost seems too simplistic a concept in Maud Hart Lovelace’s books: these are dedicated, lifelong relationships.

The loving and warm relationship between Betsy’s parents is based on observations of her own mother and father, Stella, and Tom. Although Jule and Bob Ray do not always see eye-to-eye in the series, their temperaments are even and their motives true; they enjoy one another’s company consistently (with many jokes and much good-natured teasing).

The series’ final volume, Betsy’s Wedding (1955) has Betsy’s fiancé declaring: “I want to be married to you and have you around all the time. I want to come home to you after work and tell you about my day. I want to hear you humming around, doing housework. I want to support you. I want to do things for you. If we were married and I was coming home to you tonight, I wouldn’t care if we had just bread and milk.”

But there are other instances of loyalty and commitment in the series as well: support offered to relatives near and far, parents sacrificing to ensure that a child can pursue her talents, teachers who monitor Betsy’s progress and offer appropriate opportunities, the librarian who makes regular recommendations to the budding writer, and Anna, the cook, who leaves a well-established family to work for the Ray family instead (in real life, there was an Anna, but she did not stay long with the Hart family). 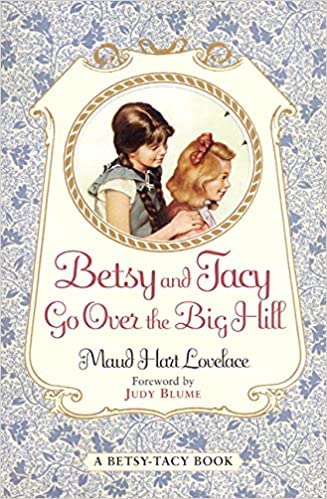 Heaven to Betsy (1945) opens with Betsy spending two weeks of the summer holiday away from home; she stays with the Taggart family on a nearby farm, to put some color in her cheeks. At fourteen years old, this is her first independent visit and her homesickness is overwhelming.

When she finally returns, she learns that the Ray family is leaving Hill Street behind and moving to a new house at the “windy junction” of High Street and Plum Street: “Betsy thought her heart would break. Didn’t they know how much she loved that coal stove beside which she had read so many books while the tea kettle sang and the little flames leaped behind the isinglass window?”

It’s not just the Ray family that calls Deep Valley and its environs home. When the girls enjoy a private picnic the summer they turn ten, they discover a community of newcomers within walking distance in Betsy and Tacy Go over the Big Hill (1942). In Little Syria, and they meet a girl close to their age.

In Little Syria, the food and drink are unfamiliar to the girls: people smoke and play flutes, give the girls raisins and figs for snacks, and sign their names in Arabic. But not everyone in Deep Valley is accepting and when Naifi is bullied. Tib (then Tacy and, finally, Betsy) intervene:

“I’m glad Tib stood up for the little Syrian girl. Foreign people should not be treated like that. America is made up of foreign people. Both of Tib’s grandmothers came from the other side. Perhaps when they got off the boat they looked a little strange too.” 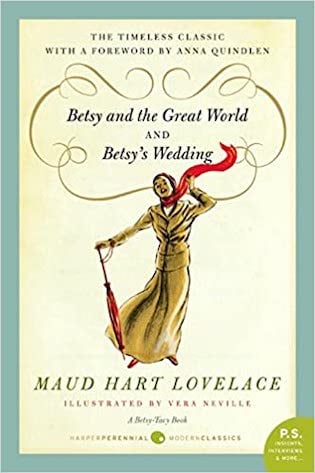 Even though Betsy travels in her sister’s footsteps in the series’ penultimate volume — Betsy and the Great World (1952) — it’s her older sister, Julia, who is passionate about the arts and pursuing a career in opera. Julia dreams of exploring Europe the way that the younger girls dreamed of exploring the other side of the hill.

In Betsy in Spite of Herself (1946), Betsy observes that Julia seems to belong to the Great World already, that courting and her beau will not be the end of her personal story. Julia’s passion is opera:

“The next was La Boheme! I saw Geraldine Farrar come in with her candle. I heard her sing ‘Mi chiamano Mimi.’ Oh, Bettina how I cried! And I knew then. Cavalleria and Pagliacci only made me surer, and so did Aïda, although that’s pretty hard, too. Not like Wagner, of course. He’s just the ultimate.”

Betsy’s dedication to her writing has a similar prominence and her parents celebrate her efforts as seriously as they support Julia’s ambitions. The first book in which her writing is central is Betsy and Tacy Go Downtown (1943), which is often cited as a favorite in the series (perhaps as much for Miss Poppy’s colorful personality, with her husband owning the Melborn Hotel and running the theater). “Betsy waved to the big desk. ‘I write stories,’” Betsy exclaims later in the series.

The Rays and readers salivate when Anna takes the position of the family’s cook: her cinnamon buns are legendary and she bakes a mean ginger cookie too. When a Ray daughter returns from a trip, she can expect any number of indulgences: “Anna’s muffins, and the choicest jams and jellies her mother had put up over the summer.”

Throughout the series, picnic fixings and the ritual of Mr. Ray’s sandwich nights (onion and vinegar concoctions on Sundays, designed to give the women a break from cooking) are a pleasure. A summer picnic might be like this: “They set out on one of the long tables potato salad, potted meat, sandwiches, hard-boiled eggs, a chocolate cake, a cocoanut cake, and a jug of lemonade.” (There are winter picnics too.)

And, for special occasions, at the Moorish Café, the family enjoys “oyster cocktails, and then soup, and then fish, and then turkey, and then salad, and then dessert … pie, ice cream or Delmonico pudding.”

Mrs. Taggart packs a fine lunch for Betsy for her trip home: “It was magnificent; ham sandwiches, dill pickles, hard-boiled eggs, a chunk of layer cake and cookies.” Betsy and her friend, Bonnie, raid the Andrews’ icebox for “cheese, apples, olives, cookies, cold ham, and some of Mrs. Andrews’ famous little mince pies” to have a hen party, complete with Ouija board. And there are remarkable banana splits at Heinz’s Restaurant and evening gatherings with freshly made fudge.

As the series wends on, the girls become old enough to host their own gatherings. While her parents are away, in Betsy Was a Junior (1947), Betsy,Tacy, and Tib hurry home from school, put on their party dresses, and host: “Balancing plates full of chicken salad, hot rolls, World’s Fair pickles and coffee, and second plates with ice cream and angel food cake, they nevertheless found time to smile at the mothers of their friends. Boys’ mothers were particularly fascinating.”

All of this nourishes the girls’ bellies but also the appetites of readers who are longing for a comfortable and warming retreat from present-day realities. And it’s even more lovely knowing that so much of this is drawn from the author’s personal experiences. “I could make it all up,” she explains, “but in these Betsy-Tacy stories, I love to work from real incidents.”

More about the Betsy-Tacy books