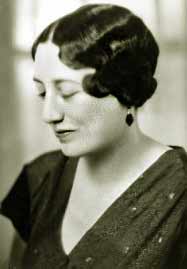 Born and raised in Mankato, Minnesota, she enjoyed a happy childhood filled with friends, culture, and a loving family. As soon as she could hold a pencil, she began writing stories and poems.

Maud Hart started her college studies at the University of Minnesota but shortly thereafter had to withdraw when she was diagnosed with appendicitis. More than willing to take a break from her studies and continue her recuperation at her maternal grandmother’s home, she escaped to the sun and warmth of California to rest and recover.

She preferred writing to college

After an uncle loaned her a typewriter, she soon wrote her first story, Number Eight. Only 18 years old at the time, she sold it to the Los Angeles Times Sunday Magazine for ten dollars. This stroke of good fortune paved the way for her writing ambitions.

Once recuperated and back to her studies, Maud continued to write and sell stories. College soon seemed less of a draw. She dropped out for good and instead she traveled solo to Europe to gather inspiration for her writing.

During her inspiring year in Europe in 1914, Maud met Paolo Conte, an Italian musician, who later inspired the character Marco in Betsy and the Great World. 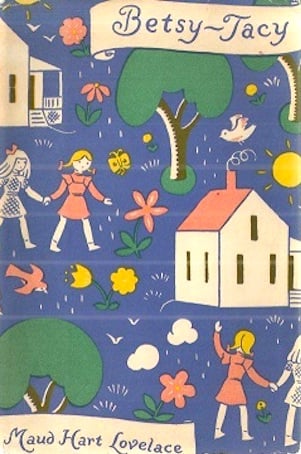 Maud returned to Minneapolis at the outbreak of World War I and began working for a fundraising program headed by Mrs. Harry B. Wakefield, the wife of the city editor of the Minneapolis Tribune.

It was the spring of 1917 and the Wakefield Publicity Bureau offered Maud a steady day job. She was hired to replace Delos Lovelace, a young writer who was headed off for First Officers Training Camp.

At a dinner hosted to hand off the position, the two hit it off and were married before the year was out when Maud was 25 years old. The couple lived apart until 1919, due to Delos’ military service.

The beginning of a writing career

They returned to live in Minnesota a few years later and Maud began writing historical novels. Her first novel,The Black Angels, was published in 1926. Several more novels followed over the next decade, including three written with Delos.

Later, the couple divided their time between Minneapolis and New York for several years. After 1928, they lived in New York permanently until their retirement in Claremont, California.

The couple had one daughter, Merian (born in 1931) who was named after Delos’s friend Merian C. Cooper. A fortuitous match in many ways, Maud Hart and Delos Lovelace collaborated on several books while she continued to write and sell short stories. The author’s own childhood inspired the bedtime stories she told their young daughter and eventually, she set them down in writing.

Not relying only on memory, Maud drew from the copious diaries and scrapbooks she’d kept growing up. Betsy was modeled after herself; Tacy after her best friend, Bick Kenney. Their town of Mankato became “Deep Valley.” Betsy-Tacy, the first of the series, was published in 1940 to immediate and resounding success.

The last book in the series, Betsy’s Wedding, was published in 1955. Maud had planned to write Betsy’s Bettina, but she eventually chose not to. It is possible that the miscarriage of her first child, a son, more than ten years before Merian’s birth, influenced her decision.

“She was in the land of dreams now, Betsy thought. The future and the past seemed to melt together. She could feel the Big Hill looking down as the Crowd danced at Tib’s wedding in the chocolate-colored house.”

Maud and Delos Lovelace moved from their home of many years in New York City to Claremont, California in 1952 after he retired from newspaper work. They enjoyed the stimulating atmosphere of the college town, founded its first Episcopal Church, and became involved with the Civil Rights movement.

When Delos Lovelace died in 1967 the couple was just shy of their 50th wedding anniversary. Maud Hart Lovelace remained in California, where she died in 1980. She is buried in the Glenwood Cemetery in Mankato, with a monument dedicated to her.

Maud Hart Lovelace rounded out her career with publishing numerous short stories and historical novels for adults. But it was the Betsy-Tacy series that sealed her legacy. Historical accuracy and detail were the threads that ran through her work, fiction and nonfiction, and her books for younger readers.

Generations of readers have responded to the depiction of Betsy and her friends as creative, independent girls who valued friendship and loyalty.

Descriptions of music, books, plays, fashion, architecture, and social customs of the times in which these stories take place add to their immense charm. The books in this series, ten in all, have inspired such devotion that the Betsy-Tacy Society maintains the childhood homes of Maud Hart Lovelace and her friend Bick Kenney in Mankato, Minnesota, as well as protecting the author’s legacy. 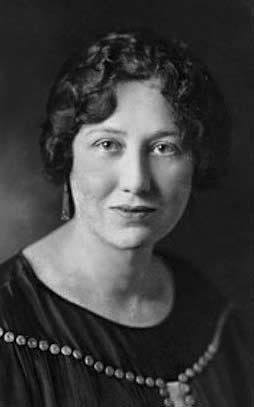 Maud in her own words

Maud wrote a capsule portait of her life that appeared on the back cover of the first edition of Betsy-Tacy (Thomas Y. Crowell, 1940):

“I was born in Mankato, Minnesota, on a street which ran straight up into a green hill and stopped. My father and mother, two sisters, and I lived in a small yellow cottage, almost at the en of the street.

Opposite, in a rambling white house, lived a large, merry Irish family in which we children found our first friends. On this street, in the yellow cottage, and in the surrounding hills, I lived the happiest childhood a child could possibly know.

I was educated in the public schools of Mankato, was graduated from high school there, and went on to the University of Minnesota. My parents moved to Minneapolis at about the same time, in order to educate their daughters more convenient. They sent us all to Europe, and my sojourn there, a year just preceding the outbreak of World War I, was rewarding.

In 1917 I married Delos Lovelace, then a lieutenant in a machine gun battalion, and afterwards for many years a newspaper man. He soon began to write short stories and books. I settle down to historical novels and wrote six, two in collaboration with my husband …

A year earlier we had moved to New York and then to suburban Garden City, Long Island. Now we live in Claremont, California. Our daughter Merian was born in the east. After she reached an age to listen to stories, I found myself most interested in inventing tales which would interest her.

It is clear that the Lovelaces love Christmas. In fact, we love all family festivals. All through my life I have been blessed in a home life full of gaiety, affection, and warmth. Thinking now of the Betsy-Tacy books, I realize with thankfulness that I have been blessed, too, in my friendships.

Many (though not all) of the characters in these stories are based on real people, still dear friends after many years. Taco and Tib and I had a reunion in 1952, as merry as any chapter in any Betsy-Tacy book.”

One Response to “Maud Hart Lovelace, Author of the Betsy-Tacy Series”