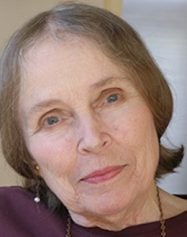 Born in Dayton, Ohio, her first ambition was to be a pirate. By second grade, she decided that wanted to grow up to be a librarian.

She discussed her aspirations in Anita Silvey’s The Essential Guide to Children’s Books and Their Creators: “I might have made a pretty good librarian, but with my distaste for heavy exercise, I would probably have made a poor pirate.”

Below-deck or in the stacks, she would have found quiet moments to scribble stories and draw pictures. As an author, she wrote stories about mermaids who swim in the sea, and immortality. As an illustrator, she drew children who hold storybooks close to their hearts.

Natalie’s father, Ralph Zane, worked in labor relations and changed jobs many times when the children were young. Natalie recalled (also in Anita Silvey’s volume) that, growing up during the Depression, “there were many things we didn’t have” but “I know now that we had all the things that really matter.”

Her father’s wit and humor had a lasting effect on Natalie. “One of the most valuable things I learned from him,” she wrote in the May-June 1993 issue of The Horn Book Magazine, “was that humor does not trivialize problems. What it does do is relax us and make it easier for us to solve those problems. It puts things in their proper perspective.”

Natalie’s mother, Genevieve Converse Moore, was an amateur artist — a landscape and portrait painter, who attended college in an era when that was uncommon for women.

After graduation, Genevieve’s household and parenting duties eclipsed her creative ambitions, but she did expose both daughters to the symphony and the opera, as well as art museums and libraries, and Natalie remembers, fondly, how often her mother read aloud the classics to the girls.

Natalie’s love of the classics persisted; as an adult, she continued to read and enjoy the works of Jane Austen, Charles Dickens, and Anthony Trollope. 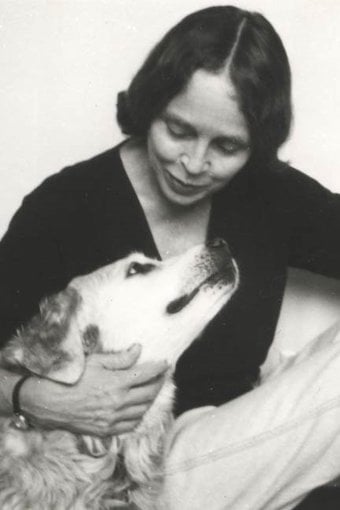 “Books were a normal part of our daily lives, and beyond the list of children’s classics, no one told us we should read such and such, or shouldn’t read so and so. We were entirely unself-conscious about it.” (From her 2018 collection Barking with the Big Dogs: On Writing and Reading Books for Children.)

Natalie’s interest in drawing intensified at the age of nine, after she discovered John Tenniel’s illustrations in a coveted edition of Alice’s Adventures in Wonderland. This was also a favorite story because Lewis Carroll never attempted to instruct or moralize.

She describes herself as a “fairly average child” in the aforementioned 1993 issue of The Horn Book Magazine: “Very skinny, but fond of toasted-cheese sandwiches and anything chocolate. By turns confident and scared to death.”

Natalie raced home after school so she could draw and she remembers being captivated by myths and fairy tales while her older sister, Diane, read realistic stories, like Louisa May Alcott’s Little Women.

Her fondest childhood memories revolved around her time in Middletown, Ohio as a student at Lincoln School on Central Avenue, when she was in the fifth grade. When interviewed for the 2007 Square Fish reprints of her classic novels, she identified that time and place as her favored destination using a time-travel device: “And again and again.”

Natalie attended Laurel School for Girls from 1947 –1950, then went on to Smith College in Northampton, MA. She graduated with a B.A. in 1954. She had initially studied theater but soon switched to fine arts.

Stories and books were important throughout her life: “The stories I always liked best were the stories which presented life as it really is: the dark and the light all messed up together, coexisting, with unanswerable questions remaining unanswered, retaining their mystery and their wonder and their endless power to motivate.” (From Barking with the Big Dogs) 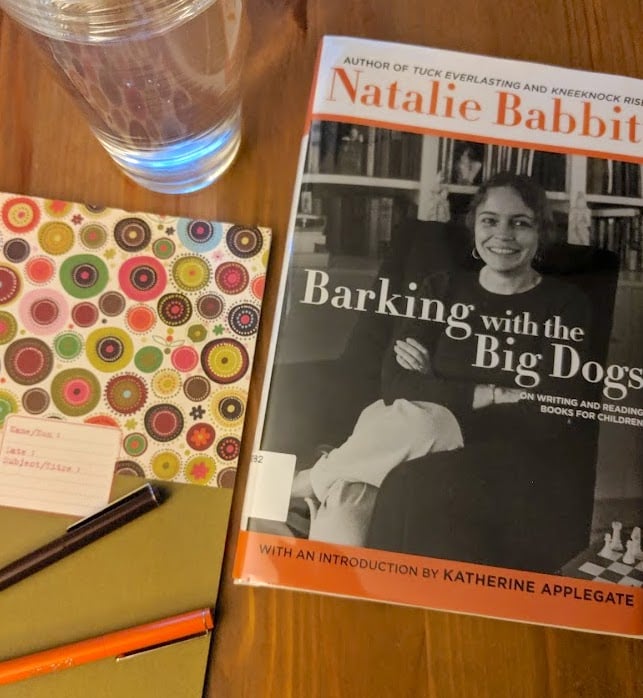 After graduating from Smith, Natalie married Samuel Fisher Babbitt, on June 26, 1954. He had left Yale, following his sophomore year, to fight in Korea for the U.S. Army, and the couple met after a friend set them up during Natalie’s sophomore year.
Eventually, they would have three children: Christopher Converse (in 1956), Thomas Collier II (in 1958), and Lucy Cullyford (in 1960). Natalie instilled her love of story in her children.

Samuel Babbitt began his career as a professor of American literature with the idea of becoming a novelist. He instead became an administrator at Yale, Vanderbilt, and Brown Colleges. Eventually, he became president of Kirkland College in Clinton, New York, the division of Hamilton College which women attended.

In a 2016 Publishers Weekly article, the story of their relationship is outlined, alongside Natalie’s memory of her later decision to establish a professional identity alongside her work as a wife and mother. In 1964, the feminist movement provided a framework within which Natalie could view her growing sense of frustration and boredom, having abandoned her artistic aspirations.

She credits Betty Friedan’s The Feminine Mystique, “a book that reawakened her long-dormant desire to be an artist” and she felt “inspired and empowered by her female friends” to return to work: “By God, I’m going to do what I’ve always wanted to do.”

It was Natalie who illustrated Samuel Babbitt’s first novel, The Forty-Ninth Magician (1966). She describes the process in Silvey’s compilation, of the husband-and-wife team’s work with Michael di Capua at Farrar, Straus & Giroux, as “natural and preordained.” Much later, in 2017, their son, Tom, produced a short animated film of this novel.

After Samuel shelved his writing ambitions, di Capua encouraged Natalie to work independently. She began by telling stories in verse, beginning with Dick Foote and the Shark (1967).

Next, in Phoebe’s Revolt (1968), Phoebe Euphemia Brandon Brown is a spirited girl in 1904 America, who insists on dressing in a more comfortable style than traditional girls’ wear. She resists and, as the title states, revolts:

“And loudly said she hated bows
And roses on her slipper toes
And dresses made of fluff and lace
With frills and ruffles every place
And ribbons, stockings, sashes, curls
And everything to do with girls.”

But as buoyant and entertaining as these characters were, verse stories were more difficult to sell, and di Capua encouraged Natalie to experiment with prose.

Her third book, The Search for Delicious, began as a short picture book but gradually grew into a full-fledged novel and ultimately established her as a fiction writer. “I would have been working in a diner if it wasn’t for Michael,” Natalie said in 2015 in School Library Journal. 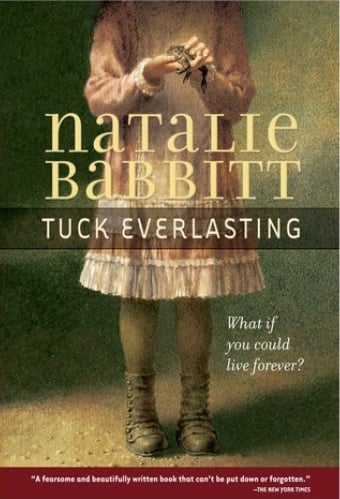 Tuck Everlasting was the book that Natalie Babbitt recommended people read, if choosing just one of her books. But in an interview with Scholastic Books, she said her personal favorite among her books was Herbert Rowbarge, written for women over forty. And her favorite of her books for children was Goody Hall, for the characters and its humor, though she declared it “the one my readers like the least.”

Tuck Everlasting is the story of the Tuck family, who drank water from a mysterious well and from that point on, stopped aging. Winnie, a young girl who lives in isolation with her mother and grandmother, spots a boy drinking from a spring. When she tries to drink from it as well, she is abducted by the kind and gentle Tuck family. From a brief description from a December 23, 1975 review by Elizabeth Coolidge in The Boston Globe:

“Tuck explains to Winnie that never to die puts you outside the wheel of life: ‘dying’s part of the wheel, right there next to being born. You can’t pick out the pieces you like and leave the rest. Being part of the whole things, that’s the blessing. But it’s passing us by, us Tucks.’

Winnie helps them keep the secret in this fascinating story. Natalie Babbit’s great skill is spinning fantasy with the timeless wisdom of the old fairy tales. Tuck Everlasting is a story of death and life, and reading it is like a disturbing dream. You know it isn’t true, yet it lingers on, haunting your waking hours, making you ponder.”

Tuck Everlasting (1975) was adapted twice as a motion picture (first, in 1981 with an age-appropriate Winnie Foster and, next, in 2002 with Alexis Bledel in a Disney production with a 15-year-old version of Winnie) and, more recently, as a stage musical (2015).

“I became a writer more or less by accident,” Natalie explained in Silvey’s collection. But after shifting into prose, Natalie Babbitt steadily built an impressive body of work.

Natalie was modest about her accomplishments. “Few of us can make anything memorable out of the small commonplaces in the life of an average child, Beverly Cleary being a notable and laudable exception,” she said in Barking with the Big Dogs.

Yet Natalie Babbitt’s Tuck Everlasting altered the landscape of children’s literature. She won a Newbery Honor for Knee-Knock Rise in 1971, a novel which was adapted for film by Miller-Brody Productions in 1975.

She received the George G. Stone Award in 1979 for the body of her work and was the U. S. nominee for the Hans Christian Andersen Medal in 1981. In 2013, she received the inaugural E. B. White Award for achievement in children’s literature. 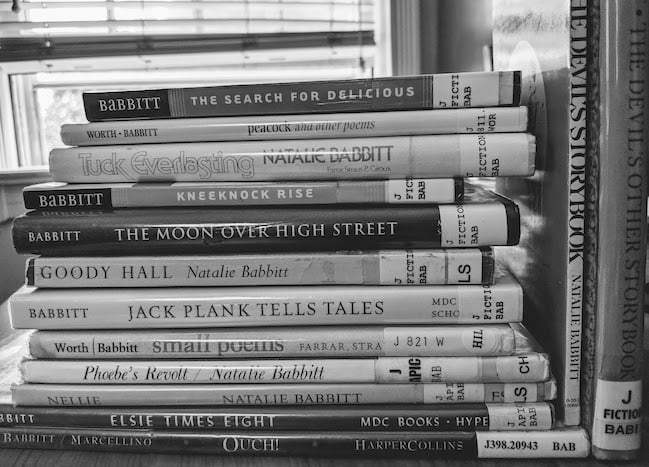 Winnie struggles with the reality of mortality in Tuck Everlasting: “For she – yes, even she – would go out of the world willy-nilly someday. Just go out, like the flame of a candle, and no use protesting. It was a certainty. She would try very hard not to think of it, but sometimes, as now, it would be forced upon her. She raged against it, helpless and insulted, and blurted at last, ‘I don’t want to die.’”

Natalie Babbitt, too, was mortal, and died of lung cancer, on October 31, 2016, in Hamden, Connecticut. In the January – February 2017 edition of The Horn Book Magazine, her husband, Samuel Fisher Babbitt noted that she “definitely … left her mark in the literary world,” that “her ambition was just to leave a little scratch on the rock” and Tuck Everlasting specifically achieved that goal.

Her Square Fish interview reveals what she wanted readers to remember about her books more generally: “The questions without answers.”

She succeeded, according to critics like Joseph O. Milner, who compared her work to that of Kurt Vonnegut and Wallace Stevens (known for their challenging political and philosophical fiction for adults) in “Hard Religious Questions in Knee-Knock Rise and Tuck Everlasting” in the Winter 1995 issue of Children’s Literature Review.

Author Tim Wynne Jones agreed, in a millennial edition of Horn Book: “I think, a century from now, that Tuck will still have something essential to say about the human condition. And how well it does so, with flawless style, in words that are exact and simple and soothing and right.” 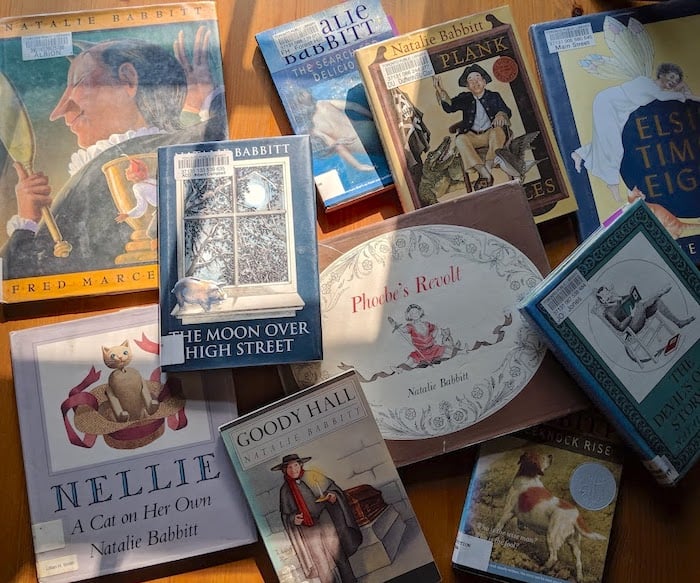 Contributed by Marcie McCauley, a graduate of the University of Western Ontario and the Humber College Creative Writing Program. She writes and reads (mostly women writers!) in Toronto, Canada. And she chats about it on Buried In Print and @buriedinprint. The Toronto Public Library played a vitally important role in the research for this piece, including assistance from the staff, in particular Leigh Turina and her onsite colleagues.