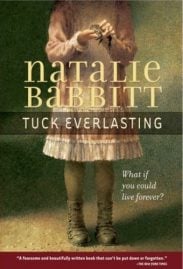 Tuck Everlasting is a 1975 novel by Natalie Babbitt (1932 – 2016) about a young girl who stumbles upon a family with an incredible secret. The quotes from Tuck Everlasting that follow demonstrate how the book balances a sense of fun and adventure with some truly thought-provoking concepts.

Originally intended for middle grade children, it’s a gracefully written story that has resonated with readers of all ages. It explores the idea of eternal life, and its flip side, mortality.

When 10-year-old Winnie Foster inadvertently comes upon the Tuck family, she learns that they became immortal after drinking from a spring on her family’s property.

The Tucks tell Winnie how they’ve watched life go by for decades, while they themselves never grow older. Winnie must decide if she’ll keep the Tucks’ secret, as well as whether she wants to join them in everlasting life.

Tuck Everlasting was filmed twice and was also made into a Broadway musical. The staged production, was, unlike the timeless story, was short-lived.

From the time of its publication, the book has been considered a modern classic, and has remained the best known of Babbitt’s many works. Few among us hasn’t pondered the question: what if you could live forever?

Following is a brief description, from the 1975 Farrar Straus Giroux edition:

A kidnapping, a murder, a jailbreak. If this were Winnie Foster’s story only, it would be like any other great adventure: you would come to the end, with all resolved, and that would be that. But this is also the story of the Tuck family and therefore, though it has a beginning and a middle, it can never end.

The two stories cross near the village of Treegap during a handful of hot August days in the 1880s, days which are a curious mixture of violence and love, of anguish and tranquility. And when those days are over, young Winnie is left to make a fundamental choice.

What she chooses at last is not what she might have chosen at first. For when you have known the Tucks as Winnie has, however briefly, you can never be quite the same again.

The book begins with the following passage, draws the reader in from this first paragraph:

“The first week of August hangs at the very top of summer, the top of the live-long year, like the highest seat of a Ferris wheel when it pauses in its turning.

The weeks that come before are only a climb from balmy spring, and those that follow a drop to the chill of autumn, but the first week of August is motionless, and hot. It is curiously silent, too, with blank white dawns and glaring noons, and sunsets smeared with too much color.”

“Life’s got to be lived, no matter how long or short. You got to take what comes.” 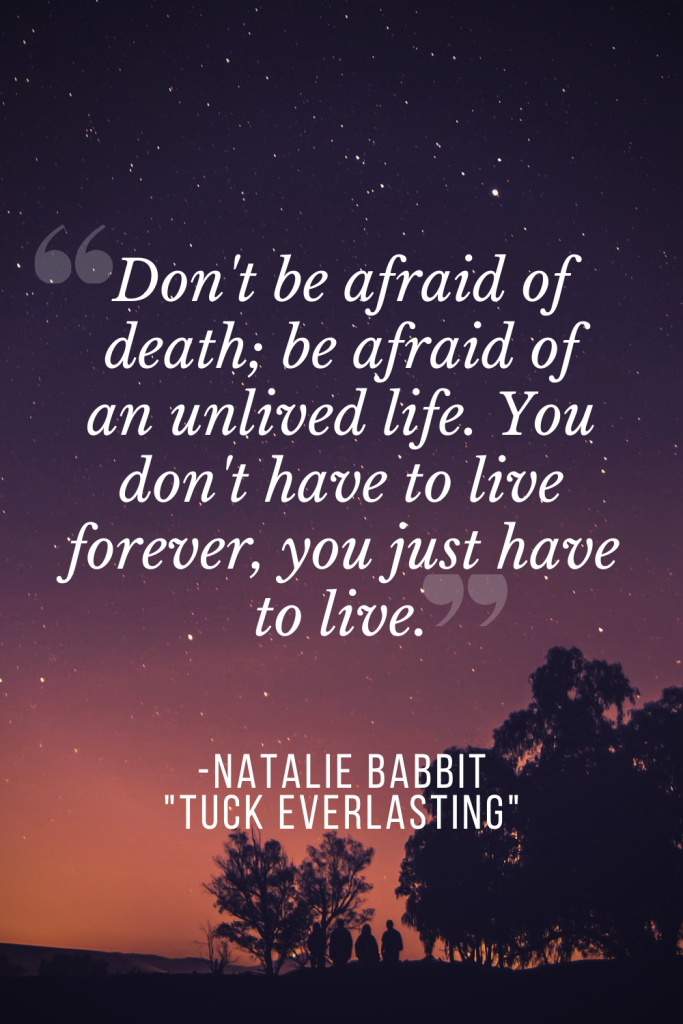 Drinking from the Spring: On Re-reading Tuck Everlasting

“For some, time passes slowly. An hour can seem like an eternity. For others, there was never enough.”

“I was having that dream again, the good one where we’re all in heaven and never heard of Treegap.”

“She was able to believe in this because she needed to; and, believing, was her own true, promising friend once more.”

“But dying’s part of the wheel, right there next to being born. You can’t pick out the pieces you like and leave the rest. Being part of the whole thing, that’s the blessing.”

“Living’s heavy work, but off to one side, the way we are, it’s useless, too. It don’t make sense. If I knowed how to climb back on the wheel, I’d do it in a minute. You can’t have living without dying. So you can’t call it living, what we got. We just are, we just be, like rocks beside the road.” 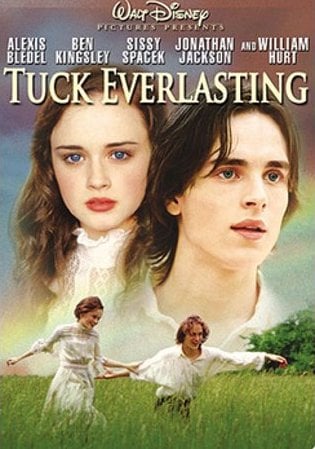 “Closing the gate on her oldest fears as she had closed the gate of her own fenced yard, she discovered the wings she’d always wished she had.”

“The ownership of land is an odd thing when you come to think of it. How deep, after all, can it go? If a person owns a piece of land, does he own it all the way down, in ever narrowing dimensions, till it meets all other pieces at the center of the earth? Or does ownership consist only of a thin crust under which the friendly worms have never heard of trespassing?”

“it’s no good hiding yourself away, like Pa and lots of other people. And it’s no good just thinking of your own pleasure, either. People got to do something useful if they’re going to take up space in the world.”

“I was more’n forty by then,” said Miles sadly. “I was married. I had two children. But, from the look of me, I was still twenty-two. My wife, she finally made up her mind I’d sold my soul to the Devil. She left me. She went away and she took the children with her.”

“ … this rowboat now, it’s stuck. If we didn’t move it out ourself, it would stay here forever, trying to get loose, but stuck. That’s what us Tucks are, Winnie. Stuck so’s we can’t move on. We ain’t part of the wheel no more.

Dropped off, Winnie. Left behind. And everywhere around us, things is moving and growing and changing. You, for instance. A child now, but someday a woman. And after that, moving on to make room for the new children.”

“And then sometimes it comes over me and I wonder why it happened to us. We’re plain as salt, us Tucks. We don’t deserve no blessings—if it is a blessing. And, likewise, I don’t see how we deserve to be cursed, if it’s a curse. Still—there’s no use trying to figure why things fall the way they do. Things just are, and fussing don’t bring changes.”

“She had gone away with the Tucks because — well, she just wanted to. The Tucks had been very kind to her, had given her flapjacks, taken her fishing. The Tucks were good and gentle people.”

4 Responses to “Quotes from Tuck Everlasting by Natalie Babbitt”