Middlemarch: A Story of Provincial Life by George Eliot 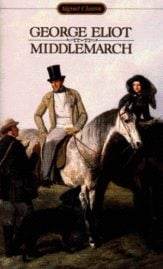 Middlemarch: A Story of Provincial Life by George Eliot is considered by some this esteemed British author’s masterpiece. This is saying a lot, since she produced a number of books that are masterworks in their own right, including The Mill on the Floss, Adam Bede, and Daniel Deronda.

The 1996 Barnes and Noble edition of Middlemarch offered this succinct summary of the novel, which was originally released in volumes spanning 1871 to 1872:

Dorothea Brooke is a beautiful young woman of the gentry, but her passion for knowledge and her fervent spirituality set her apart from her surroundings — a Victorian society that believes a woman’s highest ambition should be to marry a well-to-do young man. Tertius Lydgate is a brilliant doctor who has dedicated his energies to medical research, but his unbending idealism and lofty goals rankle the conventional thinking of the townspeople.

Despite their extraordinary character, both are destined to marriages that are not only unfulfilling, but that also strike at their ambitions and dreams. Dorothea marries Mr. Casaubon, an aging scholar, believing she can pursue an unfettered life of higher learning with him. Lydgate marries a beautiful, socially ambitious woman, who leads them to live beyond their means.

Their struggles form the emotional core of this complex story of desire and frustration, duty and moral choice, freedom and societal strictures. In this masterpiece of exposition, George Eliot scrupulously builds a richly textured picture of a provincial Victorian town. But it is no static portrait. She populates the town with people whose struggles with love, relationships and their own ambitions are instantly recognizable.

By turns satirical, suspenseful, enlightening and evocative, Middlemarch remains one of the great works of world literature. 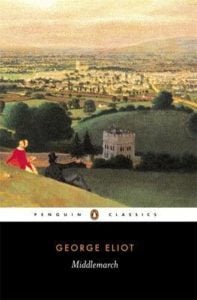 A 19th-century analysis of Dorothea Brooke
& other Middlemarch characters

It’s always exciting to come across reviews of classic novels that came out upon their publication. This article in the The Guardian (UK), dated December 21, 1871, is not so much a review, but an analysis of George Eliot’s character studies:

Middlemarch: A Study of Provincial Life by George Eliot, Volume I Miss Brooke:  George Eliot’s clear, harmonious prose, so fascinating that we are apt to rest upon its surface charms and to shrink for the task of sounding out its deeper and more spiritual meanings always has this twofold attraction: All her novels may be read as delightful tales, as pictures of the English character, and in the case of Romola, of Italian character.

They may be read by the more thoughtful as studies of the desires and wanderings of the human soul in its ceaseless efforts to transcend the limits of its own nature and circumstances. A lesson of wisdom, not the less wholesome because it is bitter, always likes hidden for those willing to extract it.

The first volume of Middlemarch, titled, “Miss Brooke” has a certain completeness of its own. Dorothea impresses as the most admirable woman that George Eliot has painted. With a quiet and dignified beauty of her own, Dorothea Brooke, with her strong moral and mental nature, was not led to emphasize her outward charms, but rather, the excellence of her soul

With everything which affection, wealth, and social esteem could give, she never thoroughly mastered any other spirit until she met with the studious, scholarly, and egotistical Mr. Casaubon. Miss Brooke was equally unsuccessful in obtaining internal satisfaction Her proud asceticism kept her in conscious and dangerous discord wit the easy-going mediocrity of the squires and great ladies of the countryside

If the reader were to venture to predict the future of Dorothea, they might fancy that “the little rift within the lute,” which might spoil the music of her rare, excellent nature, can be detected in the peculiar form of her religious convictions.

Her pride deadened the generous sympathies which she too casually lavished on more ordinary people. In the language of theology, her tendency was that of most exalted and fervid religious minds. Her devotion touched upon the spiritual sin of pharisaism.

Dorothea’s self-condemnation, as for example, when she blamed herself for riding and enjoying the exercise, was a kind of luxury in which severely devout med and women are prone to indulge. Yet this very tendency is heroic.

Her sister Celia iso the bright English type — always sensible, with a positive dislike of illusion, she is ever fresh and lovable. In the pretty scene where Dorothea divides her jewels with Celia, we scarely know with which sister our sympathies like.

Celia takes the implied rebuke on her frivolity as well as any happy creature who in her heart dislikes the excess of self-abnegation could be expected to do. 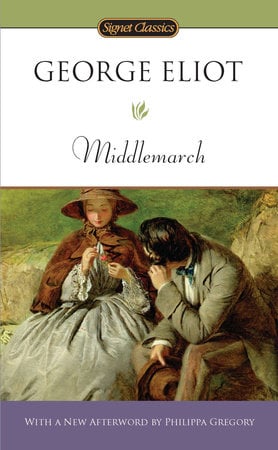 If only there were fewer such types as Mr. Brooke in the world, though they occasionally are good for amusement in skillful hands. And being the non-inflammable element in society, they’re  no doubt useful in moderation more ardent natures. With her incisive judgement of human folly, George Eliot has exposed a peculiar weakness of the respectable English.

Among the many points which strike outsiders as blemishes of the respectable English is the separation between the moral ideal and the cultivation of intellect and imagination … in the provincial world of a former generation, such as that in which Middlemarch takes place, it was simply unknown.

And Mr. Brooke was no doubt considered by his neighbors an accomplished gentleman, and a man of enlightenment up to a certain point.

Of Mr. Casaubon we probably know already as much as can be known. Capable as he is of simple and generous devotion, elevated as he was by the dignity of his studies, it is impossible to avoid the belief that he, too, is the victim of a delusion. He believes that in knowledge by itself is hidden the secret of happiness.

For a time, Dorothea shares that belief, a belief which Casaubon has kindled in her. Then come the hints of disappointment. We anxiously wait to hear that some hidden power in his character will be disclosed, or that Dorothea will learn the lesson of detachment and triumph over sorrow by mortifying affections which are destined to remain unsatisfied.

Other characters and a universal lesson

As the later chapters unfold, they’re doubtless meant as a foil to the more attractive studies of character in the earlier chapters. There is an amusing group of ordinary middle class people in Middlemarch: the clever young doctor, who, though he know the constitution of his patients, “was coarse and butcher-like;” disagreeable old Mr. Featherstone; the substantial banker, Mr. Bulstrode, and the good-humored, commonplace Vineys.

Nothing is more striking that the manner in which George Eliot’s rare humanity continually appears. Witness her remark on good and evil pride, which deserves never to be forgotten: “Pride helps us; and pride is not a bad thing when it only urges us to hide our own hearts, and not to hurt others.”

We fear, from the touching preface to the novel, that Dorothea’s fate is “a blundering life,” and that she herself is to attain nothing but admiring love and sympathy in other human hearts. This may be the more universal lesson we are to learn.

More about Middlemarch by George Eliot