Silly Novels by Lady Novelists: An Essay by George Eliot (1856) 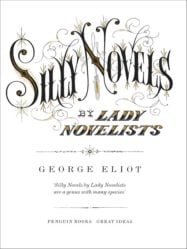 In Silly Novels by Lady Novelists, one of George Eliot’s most famous essays, she slammed her sister writers who flooded the market with formulaic romantic novels. They might be the equivalent of today’s trashier romance novels, with more archaic language and no bodice-ripping.

This essay is written in a tone that today might be described as “snarky.” Eliot skewered the popular, frothy women’s novels with their vacuous, heroines and clichéd plots, characterization, and language.

In this genre of novels, the heroines were usually well-educated, but their education didn’t do them much more good than being haughty and self-satisfied.

Eliot also blasted the lady novelists for their poor writing styles, claiming that they substituted “vagueness for depth, bombast for eloquence, and affectation for originality.” Plots most often revolved around the successful search for a suitable husband.

And now, here are some excerpts from “Silly Novels by Lady Novelists,” letting the eloquent George Eliot speak for herself:

Silly Novels by Lady Novelists are a genus with many species, determined by the particular quality of silliness that predominates in them—the frothy, the prosy, the pious, or the pedantic.  But it is a mixture of all these—a composite order of feminine fatuity—that produces the largest class of such novels, which we shall distinguish as the mind-and-millinery species.

The heroine is usually an heiress, probably a peeress in her own right, with perhaps a vicious baronet, an amiable duke, and an irresistible younger son of a marquis as lovers in the foreground, a clergyman and a poet sighing for her in the middle distance, and a crowd of undefined adorers dimly indicated beyond.

Her eyes and her wit are both dazzling; her nose and her morals are alike free from any tendency to irregularity; she has a superb contralto and a superb intellect; she is perfectly well dressed and perfectly religious; she dances like a sylph, and reads the Bible in the original tongues.

Or it may be that the heroine is not an heiress—that rank and wealth are the only things in which she is deficient; but she infallibly gets into high society, she has the triumph of refusing many matches and securing the best, and she wears some family jewels or other as a sort of crown of righteousness at the end … 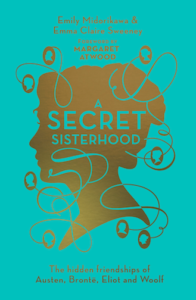 Be not a baker if your head be made of butter

… “Be not a baker if your head be made of butter,” says a homely proverb, which, being interpreted, may mean, let no woman rush into print who is not prepared for the consequences.  We are aware that our remarks are in a very different tone from that of the reviewers who, with perennial recurrence of precisely similar emotions, only paralleled, we imagine, in the experience of monthly nurses, tell one lady novelist after another that they “hail” her productions “with delight.”

We are aware that the ladies at whom our criticism is pointed are accustomed to be told, in the choicest phraseology of puffery, that their pictures of life are brilliant, their characters well drawn, their style fascinating, and their sentiments lofty.

But if they are inclined to resent our plainness of speech, we ask them to reflect for a moment on the chary praise, and often captious blame, which their panegyrists give to writers whose works are on the way to become classics.  No sooner does a woman show that she has genius or effective talent, than she receives the tribute of being moderately praised and severely criticised.

By a peculiar thermometric adjustment, when a woman’s talent is at zero, journalistic approbation is at the boiling pitch; when she attains mediocrity, it is already at no more than summer heat; and if ever she reaches excellence, critical enthusiasm drops to the freezing point.

Harriet Martineau, Currer Bell [the pen name of Charlotte Brontë], and Mrs. Gaskell have been treated as cavalierly as if they had been men. And every critic who forms a high estimate of the share women may ultimately take in literature, will on principle abstain from any exceptional indulgence toward the productions of literary women.

For it must be plain to every one who looks impartially and extensively into feminine literature that its greatest deficiencies are due hardly more to the want of intellectual power than to the want of those moral qualities that contribute to literary excellence—patient diligence, a sense of the responsibility involved in publication, and an appreciation of the sacredness of the writer’s art.

“No sooner does a woman show that she has genius or effective talent, than she receives the tribute of being moderately praised and severely criticised.”

“A really cultured woman, like a really cultured man, is all the simpler and the less obtrusive for her knowledge; it has made her see herself and her opinions in something like just proportions; she does not make it a pedestal from which she flatters herself that she commands a complete view of men and things, but makes it a point of observation from which to form a right estimate of herself.”

“To judge from their writings, there are certain ladies who think that an amazing ignorance, both of science and of life, is the best possible qualification for forming an opinion on the knottiest moral and speculative questions.  Apparently, their recipe for solving all such difficulties is something like this:

Take a woman’s head, stuff it with a smattering of philosophy and literature chopped small, and with false notions of society baked hard, let it hang over a desk a few hours every day, and serve up hot in feeble English when not required.”

“By a peculiar thermometric adjustment, when a woman’s talent is at zero, journalistic approbation is at the boiling pitch; when she attains mediocrity, it is already at no more than summer heat; and if ever she reaches excellence, critical enthusiasm drops to the freezing point.”

Read the full text of Silly Novels by Lady Novelists.