Silas Marner: The Weaver of Raveloe by George Eliot (1861) 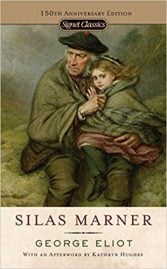 Silas Marner: The Weaver of Raveloe was the third novel of George Eliot (1819 – 1880). Published in 1861, this novel, like others written by the esteemed British author (whose real name was Mary Ann Evans), addresses a number of social themes while telling a compelling story.

Silas Marner, a rather simple man, is betrayed by a trusted friend who accuses him of a crime he didn’t commit. This leads to his expulsion from a religious community that he has loved being a part of. He relocates to a remote village called Raveloe where he has no friends or family, and where the community eyes him suspiciously due to his odd nature.

Marner works tirelessly at his trade as a weaver and amasses a pile of gold, which he practically worships. When his gold is stolen, he goes into a tailspin. A little golden-haired girl wanders into his cottage, rescuing him from despair. Marner raises her with the assistance of his new neighbors, learning the value of love and community. Grounded in the tradition of realism, the novel encompasses the following themes:

An 1861 review of Silas Marner by George Eliot

From the original review in The Brooklyn Daily Eagle, April 26, 1861: Silas Marner, we believe, will have many friends. The poor weaver of Raveloe will be a welcome guest in English homes and his simple tale will touch the hearts of “gentle readers.”

George Eliot’s heroes and heroines do not usually belong to the class familiar to ordinary novel readers. “Marner was highly thought of,” we are told at the outset, “in that little hidden world, known to itself as the church assembling in Lantern-Yard, he was believed to be a young man of exemplary life and ardent faith; and a peculiar interest had been centered in him ever since he had fallen, at a prayer meeting, into a mysterious rigidity and suspension of consciousness, which, lasting for an hour or more, had been mistaken for death.”

A betrayal by a friend and sweetheart
A member of a narrow religious community, and subject to epileptic fits, poor Silas does not at the first blush, appear to be quite the person to carry away our sympathies, or excite in our hearts any large amount of interest. But we soon begin to feel compassion for him for his undeserved misfortunes, and before we have reached the last page of the narrative we cannot fail to regard and esteem his genuine humanity.

In the lantern-yard congregation Silas Marner, found a friend named William Dane. “One of the most frequent topics of conversation between the two friends was assurance of salvation Silas confessed that he could never arrive at anything higher than hope mingled with fear, and listened with longing wonder when William declared that he had possessed unshaken assurance ever since, in the period of concentration, he had dreamed that he saw the words ‘calling and election sure,’ standing by themselves on a white page in the open Bible.”

Besides the friend, Silas had a sweetheart; and by both, he was betrayed. A false accusation was made against him; lots were cast, after earnest prayer, and “the lots declared Silas Marner guilty.” Silas went forth with a shaken trust in God and man, and soon afterward learned that his false friend was engaged to marry the young servant girl he had once fondly loved.

Exile to Raveloe
A blight now had fallen over Marner’s life. He left the old town where he had been a conspicuous member of the Lantern-yard congregation, and took up his abode in a rural district called Raveloe. Here he pursued his labors at the loom, and so successfully that the solitary weaver’s money began to accumulate.

“Cut off from faith and love,” nothing seemed left to him but money and his loom. Though not yet forty, he was called “Old Master Marner.” Prematurely aged, he had also contracted the sordid vice of old age — he was a miser. His long course of labor were unrelieved by intervals of relaxation or pleasant conversation; his money was his idol, friend, and companion.

The weaver and his money
This is the history of Silas Marner until the fifteenth year after he came to Raveloe. The livelong day he sat at his loom, his ear filled with its monotony, his eyes bent close down on the slow growth of sameness in the brownish web. His muscles moved with such even repetition that their pulse seemed almost as much a constant as the holding of his breath.

At night came his revelry; at night he closed his shutters and made fast his doors and drew out his gold. Long since, the heap of coins had become too large for the iron pot to hold them, and he had made for them too thick leather bags, which wasted no room in their resting place but bent themselves flexibly to every corner.

How the guineas shone as they came pouring out of dark leather! The silver bore no large proportion to the gold because the long pieces of linen which formed Marner’s chief work were always partly paid for in gold and out the silver he supplied his own bodily wants, choosing always the shillings and sixpence pieces to spend in this way.

He loved the guineas best, but he would not change the silver — the crowns and half-crowns that were his own earnings, begotten by his labor — he loved them all He spread them out in heaps and bathed his hands in them; then he counted them and set them up in regular piles and felt their rounded outline between his thumb and fingers, and thought fondly of the guineas that were only half-earned by the work in his loom, as if they’d been unborn children.

No wonder his thoughts were still with his loom and his money when he made his journey through the fields and the lanes to fetch and carry home his work, so that his steps never wandered to the lane-side in search of the once-familiar herbs; these too belonged to the past from which his life had shrunk away.

Robbed of his treasure; a child wanders in
At length, another great calamity befell the poor weaver. He was robbed — robbed of all his hoarded treasure! By this unexpected blow, Marner was utterly prostrated. For what had he now to live? Who or what would supply the place of his beloved money?

A little child finds its way into Silas’s cottage, having strayed over the snow from the embrace of a dead mother. That poor creature — the profligate wife of a gentleman’s son — had perished in the cold from an overdose of laudanum. The weaver soon becomes conscious that he has found a fresh treasure, and his emotions when he first awakens to a send of its value are beautifully described:

Turning towards the hearth, where the two logs had fallen apart, and sent forth only a red uncertain glimmer, he seated himself on his fireside chair, and was stooping to push his logs together, when, to his blurred vision, it seemed as if there were gold on the floor in front of the hearth. Gold!—his own gold—brought back to him as mysteriously as it had been taken away!

He felt his heart begin to beat violently, and for a few moments, he was unable to stretch out his hand and grasp the restored treasure. The heap of gold seemed to glow and get larger beneath his agitated gaze. He leaned forward at last, and stretched forth his hand; but instead of the hard coin with the familiar resisting outline, his fingers encountered soft warm curls. In utter amazement, Silas fell on his knees and bent his head low to examine the marvel: it was a sleeping child—a round, fair thing, with soft yellow rings all over its head.

Could this be his little sister come back to him in a dream—his little sister whom he had carried about in his arms for a year before she died, when he was a small boy without shoes or stockings? That was the first thought that darted across Silas’s blank wonderment. Was it a dream?

He rose to his feet again, pushed his logs together, and, throwing on some dried leaves and sticks, raised a flame; but the flame did not disperse the vision—it only lit up more distinctly the little round form of the child, and its shabby clothing. It was very much like his little sister. Silas sank into his chair powerless, under the double presence of an inexplicable surprise and a hurrying influx of memories. How and when had the child come in without his knowledge? 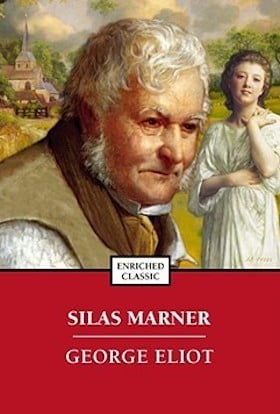 Once these passages are excerpted in the review above, it ends abruptly — as if the reviewer ran out of stamina or space. So let’s briefly tie up the loose ends of the plot.

The child who has wandered into Marner’s cottage is a little girl who he names Eppie after his mother and sister, who were both named Hepzibah. As might be predicted, the golden-haired child becomes a much more meaningful form of treasure than the golden coins that were robbed from him.

A kind neighbor, Dolly Winthrop, helps Marner raise Eppie, and enables them to become more a part of the community life of the village. Godfrey Cass, the eldest son of the local squire, helps Marner by providing financial support. He has been blackmailed by his brother Dunstan over his secret first marriage to Molly Farren, a poor opium addict.

Eppie grows up to be a fine young woman who is loved by Marner and is a darling of the entire village. Through Eppie, Marner has also become a respected member of the community.

A shocking development happens when the skeleton of Dunstan Cass is found at the bottom of the stone quarry near Marner’s cottage. In the bones of his hand is Silas’s bag of gold, which is now returned to him.

Godfrey, meanwhile, has been married to Nancy Lammeter, but has kept his first marriage and child a secret from her. Now, he confesses to her that he was married to Molly and that Eppie was their daughter. He also reveals the same to Eppie and offers her a more elegant home with himself and Nancy. Eppie declines, choosing to stay with Marner, to whom she is devoted: “I can’t think o’ no happiness without him.”

Marner realizes what a satisfying life he has had in Raveloe with Eppie and their neighbors and friends. Eppie marries Dolly’s son Aaron, who has been her friend as she grew up, and they move into Marner’s cottage — which has been greatly expanded by Godfrey for the comfort of all.

Silas Marner is a Victorian novel that is sentimental yet satisfying. It rewards the reader with a happy ending, though in George Eliot’s capable hands it manages to remain wonderfully complex.

Over the years, Silas Marner has been adapted for the screen a number of times. It was adapted at least five times into silent films in the years 1911 – 1926, and was produced by Masterpiece Theatre (BBC) in 1985 with Ben Kingsley starring as Silas Marner. 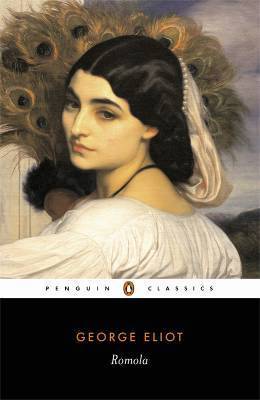