Gone With the Wind’s Melanie Wilkes, and the Woman Who Portrayed Her 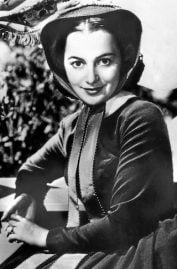 It’s a talented fiction writer who can make you believe that she has written your story. And what if you’ve been named for a fictional heroine because your father loved her character traits?

Then, it’s almost an umbilical cordlike connection that stays with you throughout your life. This is how I came to be named Melanie, after the character of Melanie Wilkes from Gone With the Wind.

My father had read the book in engineering college, when I was nowhere in the picture. He tucked the name away in his head for future use. After my birth, as is wont in families, many suggestions for names came up from family members. The name Melanie encountered a bit of resistance, being a Christian name in an Indian home, but my father stood his ground.

He had loved what Melanie from Gone with the Wind stood for and hoped that the daughter named after her would in some way reflect her “qualities of charm and devotion.” He even wrote a letter to the British Council in the city that I was born in to check on the genus of the name, after verification with the Oxford Book of English Names.

The British Council replied promptly enough, congratulating him and saying that since they didn’t have that book  in their library, they were ordering a copy. 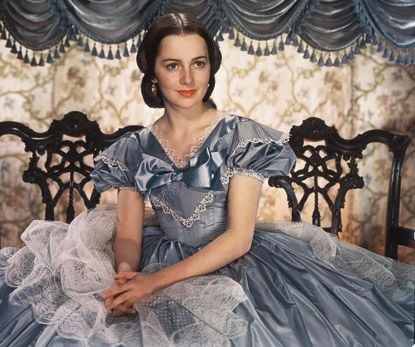 In Margaret Mitchell’s award-winning novel, Melanie is the quintessential good girl, compared to the feisty and spirited Scarlett O’Hara. They make a perfect foil for one another and become best friends, with Melanie rising to Scarlett’s defense when people spoke ill of her.

Melanie is full of admiration for Scarlett and tells her, “I’ve always admired you so. I wish I could be more like you.” Ironically, Melanie’s husband, Ashley realizes his wife’s true worth only when she is dying and says to Scarlett, “I can’t live without her. I can’t. Everything I ever had is going with her … She’s the only dream I ever had that didn’t die in the face of reality.”

In essence, that sums up what Melanie’s character stands for. She is compassion personified and steadfast in her convictions about what’s right. Despite being demure, she is able to display courage when the going gets tough, so much so that at various points in the novel, each of the characters turns to her in times of need, and she winds up playing a pivotal role in the story. 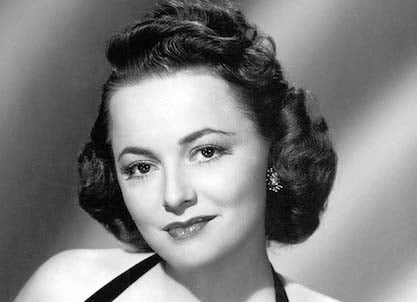 Here is how the difference between the characters of Melanie and Scarlett is summed up in the pages of Gone With the Wind:

“What Melanie did was no more than all Southern girls were taught to do: to make those about them feel at ease and pleased with themselves. It was this happy feminine conspiracy which made Southern society so pleasant. Women knew that a land in which men were contented, uncontradicted, and safe in possession of unpunctured vanity was likely to be a very pleasant place for women to live.

So from the cradle to the grave, women strove to make men pleased with themselves, and the satisfied men repaid lavishly with gallantry and adoration. In fact, men willingly gave the ladies everything in the world, except credit for having intelligence.

Scarlett exercised the same charms as Melanie but with a studied artistry and consummate skill. The difference between the two girls lay in the fact that Melanie spoke kind and flattering words from a desire to make people happy, if only temporarily, and Scarlett never did it except to further her own aims.”

One cannot speak of Melanie without mentioning Olivia de Havilland, who plays the role in the faithful 1939 film adaptation of Gone with the Wind. The role got so under her skin that she wrote a piece titled “To Parents, Who Name Their Daughter Melanie.”

When Selznick approached Olivia to play a part in Gone with the Wind, Warner Bros., with whom she had then been under contract, wouldn’t release her. She wangled it by inviting Warner’s wife to tea. Mrs. Warner was able to persuade her husband to loan her for the film.

Much to everyone’s surprise, Olivia insisted that she wanted to play Melanie in the movie, when every actress was vying to win the role of Scarlett O’Hara.

She felt that she knew what it was to be a Scarlett but “Melanie had very deeply feminine qualities, which I felt were very endangered at that time and from generation to generation, and that somehow they should be kept alive. And one way I could contribute to that, was to play Melanie.”

By feminine qualities, de Havilland wasn’t referring just to physical attributes. She clarified by saying, “Melanie was other-people oriented. She was always thinking of the other person.”

For me, the most important observation that Olivia de Havilland made is: “The interesting thing to me is that Melanie was happy. Scarlett wasn’t a happy woman, all self-generated and preoccupied. But there’s Melanie, loving, compassionate. She had this marvelous capacity to relate to people with whom she would normally have no relationship.” 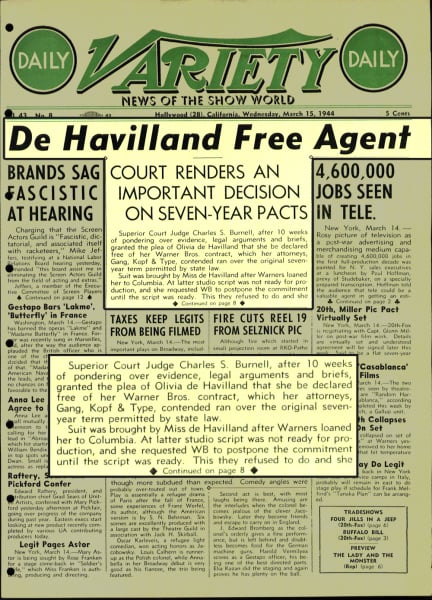 In addition to being remembered as Melanie all of her acting life, Olivia needs to be acknowledged and thanked for the De Havilland Law, which was a victory for all the creative people of Hollywood.

When Olivia entered the film business, the studios enjoyed all the power, and signed actors up to work on long-term contracts involving six-day work weeks and long hours. If they refused to be loaned out to another studio or to play a particular role, they were liable for suspension without pay, with the length of the suspension extending the period of contract.

Under contract to Warner Bros., Olivia grew dissatisfied with the roles assigned to her and wished to break free. She longed to play a role like that of Melanie (for which she ultimately won an Oscar nomination) and knew she had an audience who would want to see her movies. “I had a responsibility to them,” she said in an interview.

In 1943, when her contract with Warner Bros. ended, the studio refused to release her, saying that she had to serve them for another six months to factor in a period of suspension. When Olivia decided to legally take on Warner Bros., she put a budding career on the line to fight an unjust system.

The courts ruled finally in favor of Olivia in a landmark judgement, which came to be known as the De Havilland Law, with one newspaper Variety boldly splashing the headline “de Havilland Free Agent.”

Olivia lived on till the age of 104 but fought this case at a young age.  It’s hard to know where this courage came from and whether playing the role of Melanie had anything to do with it.  Certainly, if I could have one wish as a way to live up to my name, it would be to do something as bold and brave as Olivia de Havilland, who epitomized the character of Melanie Wilkes.

2 Responses to “Gone With the Wind’s Melanie Wilkes, and the Woman Who Portrayed Her”