Gone with the Wind: Echoing Through the Ages 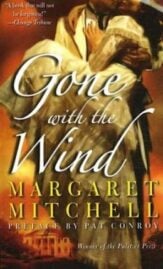 “The greatest love story ever told.”  “The epic novel of our time.”  These are just two of the many descriptive phrases applied to Margaret Mitchell’s brilliant 1936 tome, Gone With the Wind.

Is it an epic tale, indicative of the essence of the American south during the Civil War? Absolutely, it is. Is it one of the most tense, romantic, and familiar love stories of all-time?  Yes, it definitely is.

A book about change

When we come right down to it, the book is about change and how people deal with change differently – some, those who understand how to take advantage of circumstances, will manage change with extraordinary success; others, those too old, naïve, or stubborn to adjust, are destroyed by change – deflated and disillusioned.

In the tradition of Mark Twain’s Adventures of Huckleberry Finn and John Steinbeck’s Grapes of Wrath, Gone With the Wind is American reality in print – a detailed period piece which resounds beyond its time and echoes on through the ages.

I cannot think of another book that is written so perfectly and that I love so much, whose main characters are so utterly despicable and unlikeable.

Scarlett O’Hara and Rhett Butler lack almost any kind of redeeming quality – they are easy to hate, yet, somehow, I love them. This is the mark of inspired writing and realistic characterization.

Although I was often at odds with the actions of Scarlett and Rhett, I also sympathized with their plights and understood why they chose to act the way they did – why they made the choices they made.

Some of the minor characters, too, were downright unbearable.  From the faint-prone Aunt Pittypat to the combative India, from the faulty White Knight, Ashley, to the Yankee Army Wives, so many characters in the cast of Gone With the Wind are largely negative – foolish, weak, selfish, and proud, among other things. 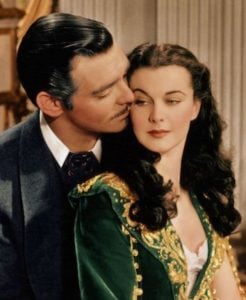 Still, as irritating as they might be, they are honest characters. They are believable and independent from one another, equally dislikable, but each in his or her own way. Fortunately, there were some saving graces – characters easy to fall in love with, such as Scarlett’s angelic but deceptively strong sister-in-law, Melanie.

Put together, this cast of characters, crafted and molded so superbly by Mitchell, are interesting to watch, easy to believe, and enjoyable to spend time with.

At just over 1,000 pages, Gone With the Wind is quite the chunkster. Its subject matter, too, is hefty. Combined, the length and plot are seemingly daunting and the primary reason why it took me so many years to take this book down off the shelf, where it has been sitting for a half-decade.

Surprisingly, I found myself breezing through a hundred pages a day and finishing the book in less than two weeks. One of the things I most hate in a book is lengthy chapters – chapters of 25 pages or more — and this book was filled with them; yet, for some reason, it hardly bothered me this time.

So, why was I able to read the book so quickly? Interesting themes, partly. Entertaining characters, somewhat. But, largely, it was thanks to the prose.

While, at times, I found the romantic (lower-case “r”) a bit over the top, it was not so dramatic as to distract from the more important elements of the story.  That being the one minor complaint – all that is left to say about the style and prose of this work is that they are simply lovely.

The language is fluid and charming, as befits a story about the American south. The dialogue is well-spaced and delivered appropriately, supporting the general narration and the many internal monologues of Scarlett.

There were some grammatical errors, becoming more frequent later in the book, but this is a complaint against this particular edition (1973) and the publisher (Avon), not the author.

Gone With the Wind: A Publishing Phenomenon

Instead of trying to describe the many interesting and important elements of this book – the topics covered, the politics presented, the societal elements explored —it might be easier to talk about what was not in this book.

This is a book about the American south – and there are many different types of southerner depicted here, with ample time provided to express their belief systems, social ideals, political aspirations, etc.

The one thing missing which could have provided some more insight would have been a prominent Yankee/Northern character.

Still, as I’ve mentioned a few times – this is a southern book, and it is appropriate that it be presented through southern eyes (mostly Georgian, although there are brief interludes from Louisiana, Virginia, and even Ireland).

Perhaps the most interesting elements in the book is the battle between the decline of the “Old” south and the rise of the “New” (characterized by the “Oldies” as scallawags). The nature of love, too, and the blinders we place upon ourselves – the distracting fantasies, the aching for the past – are intimately, almost painstakingly evaluated.

Ultimately, though, it is perhaps Scarlett’s oft repeated thought, “I’ll think of it all tomorrow. I can stand it then,” which sums up the various aspects of this book and its themes.

So much has happened, so much has changed.  It is only those who can continually refocus, who can stay strong and positive, and who can adjust to the changes, sacrificing, at times, prior ideals, who will survive the turmoil.

Notable Quotes from Gone with the Wind

“He never really existed at all, except in my imagination.  I loved something I made up  … I made a pretty suit of clothes and fell in love with it.”

“Death and taxes and childbirth!  There’s never any convenient time for any of them!”

“After all, tomorrow is another day.”

“If the people who started wars didn’t make them sacred, who would be foolish enough to fight?  But, no matter what rallying cries the orators give to the idiots who fight, no matter what noble purposes they assign to wars, there is never but one reason for a war. And that is money.”

“As God is my witness, I’m never going to be hungry again.”