Was Charlotte Brontë’s “Shirley” an Idealized Portrait of Her Sister Emily? 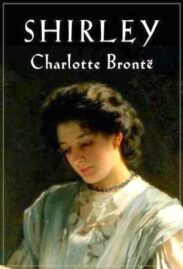 Shirley, the second published novel by Charlotte Brontë, came out in 1849 while she was still using the pseudonym Currer Bell. Charlotte had already achieved fame and notoriety with the wildly successful Jane Eyre under her ambiguous nom de plume. The question we’ll be exploring here is how much of Shirley’s character did Charlotte draw from her sister Emily.

A more challenging novel to read than Jane Eyre, Shirley: A Tale is now considered a prime example of the mid-19th century “social novel.” The social novels that emerged from that period were works of fiction dealing with themes like labor injustice, abuse of and bias against women, and poverty.

Shirley is set in Charlotte’s native Yorkshire in 1811 and 1812, and takes place against the scene of the Luddite uprisings in the Yorkshire textile industry. It must have been a lonely endeavor for Charlotte, who, having gotten used to her sisters Anne and Emily as writing companions, was now the only surviving sibling. Anne, Emily, and their brother Branwell had not long before met their untimely deaths.

The rise of the social novel

A fellow novelist who excelled at the genre of social novel was Elizabeth Gaskell, who, incidentally, was also to become known for The Life of Charlotte Brontë (1857). This posthumous biography helped cement Charlotte’s literary legacy shortly after her death. Mrs. Gaskell’s Mary Barton, a novel that preceded Shirley by just a year, and also termed an “industrial novel,” explored the relationships between workers and their employers.

Since Charlotte may have already been hard at work on Shirley, it’s hard to tell how much she may have been influenced by Mrs. Gaskell’s book by the time of publication.

What makes Shirley fascinating is that Charlotte had told Mrs. Gaskell that the character of Shirley is how she imagined Emily may have turned out if she had enjoyed the benefits of wealth and privilege. Another character, Caroline Helstone, may have been loosely inspired by Anne, though others thought she may have been based on Charlotte’s dear friend Ellen Nussey.

Following is an excerpt from Emily Brontë by Mary F. Robinson. Diving back to 1883, it presents an insightful exploration of the parallel between the real-life Emily, in all her odd complexity, and the character of Shirley:

Shirley: A novel with a grace and beauty of its own

Excerpted and condensed from Emily Brontë by Mary F. Robinson, 1883:

Shirley has never attained the steady success of her masterpiece, Villette, neither did it meet with the furor which greeted the first appearance of Jane Eyre. It is, indeed, inferior to either work; a very quiet study of Yorkshire life, almost pettifogging in its interest in ecclesiastical squabbles, almost absurd in the feminine inadequacy of its heroes.

And yet Shirley has a grace and beauty of its own. This it derives from the charm of its heroines—Caroline Helstone, a lovely portrait in character of Charlotte’s dearest friend, and Shirley herself, a fancy likeness of Emily Brontë.

Emily Brontë, but under very different conditions. No longer poor, no longer thwarted, no longer acquainted with misery and menaced by untimely death; not thus, but as a loving sister would fain have seen her, beautiful, triumphant, the spoiled child of happy fortune.

Yet in these altered circumstances Shirley keeps her likeness to Charlotte’s hardworking sister; the disguise, happily baffling those who, like Mrs. Gaskell, “have not a pleasant impression of Emily Brontë,” is very easily penetrated by those who love her …

Charlotte’s portrait gives us another view, and fortunately there are still a few alive of the not numerous friends of Emily Brontë. Every trait, every reminiscence paints in darker, clearer lines, the impression of character which Shirley leaves upon us. Shirley is indeed the exterior Emily, the Emily that was to be met and known thirty-five years ago, only a little polished, with the angles a little smoothed, by a sister’s anxious care …

The Brontë sisters, in a painting by their brother, Branwell
Charlotte wrote much about their paths to publication
. . . . . . . . . .

An echo of Emily and her fierce dog

But to know how Emily Brontë looked, moved, sat and spoke, we still return to Shirley. A host of corroborating memories start up in turning the pages. Who but Emily was always accompanied by a “rather large, strong, and fierce-looking dog, very ugly, being of a breed between a mastiff and a bulldog?”

It is familiar to us as Una’s lion; we do not need to be told, Currer Bell, that she always sat on the hearth rug of nights, with her hand on his head, reading a book; we remember well how necessary it was to secure him as an ally in winning her affection.

Has not a dear friend informed us that she first obtained Emily’s heart by meeting, without apparent fear or shrinking, Keeper’s huge springs of demonstrative welcome?

How characteristic, too, the touch that makes her scornful of all that is dominant, dogmatic, avowedly masculine in the men of her acquaintance; and gentleness itself to the poetic Philip Nunnely, the gay, boyish Mr. Sweeting, the sentimental Louis, the lame, devoted boy-cousin who loves her in pathetic canine fashion. That courage, too, was hers.

Emily, also, singlehanded and unarmed, punished her great bulldog, Keeper, for his household misdemeanors, in defiance of an express warning not to strike the brute, lest his uncertain temper should rouse him to fly at the striker’s throat. And it was she who fomented his bruises. This prowess and tenderness of Shirley’s is an old story to us. 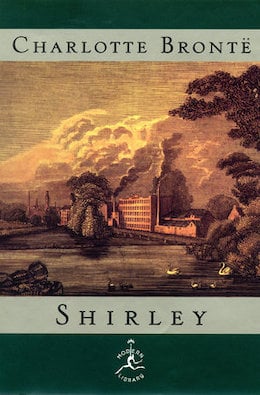 More parallels between Shirley and Emily

And Shirley’s love of picturesque and splendid raiment is not without an echo in our memories. It was Emily who, shopping in Bradford with Charlotte and her friend, chose a white stuff patterned with lilac thunder and lightning, to the scarcely concealed horror of her more sober companions.

And she looked well in it; a tall, lithe creature, with a grace half-queenly, half-untamed in her sudden, supple movements, wearing with picturesque negligence her ample purple-splashed skirts; her face clear and pale; her very dark and plenteous brown hair fastened up behind with a Spanish comb; her large grey-hazel eyes, now full of indolent, indulgent humor, now glimmering with hidden meanings, now quickened into flame by a flash of indignation, “a red ray piercing the dew.”

She, too, had Shirley’s taste for the management of business. We remember Charlotte’s disquiet when Emily insisted on investing Miss Branwell’s legacies in York and Midland Railway shares.

“She managed, in a most handsome and able manner for me when I was in Brussels, and prevented by distance from looking after our interests, therefore I will let her manage still and take the consequences. Disinterested and energetic she certainly is; and, if she be not quite so tractable or open to conviction as I could wish, I must remember perfection is not the lot of humanity, and, as long as we can regard those whom we love, and to whom we are closely allied, with profound and never-shaken esteem, it is a small thing that they should vex us occasionally by what appear to us headstrong and unreasonable notions.”

So speaks the kind elder sister, the author of Shirley. But there are some who will never love either type or portrait. Sydney Dobell spoke a bitter half-truth when, ignorant of Shirley’s real identity, he declared: “We have only to imagine Shirley Keeldar poor to imagine her repulsive.”

The world has no use for a poor and plain woman

The silenced pride, the thwarted generosity, the unspoken power, the contained passion of such a nature are not qualities which touch the world when it finds them in an obscure and homely woman. Even now, very many will not love a heroine so independent of their esteem. They will resent the frank imperiousness, caring not to please, the unyielding strength, the absence of trivial submissive tendernesses, for which she makes amends by such large humane and generous compassion.

“In Emily’s nature,” says her sister, “the extremes of vigor and simplicity seemed to meet. Under an unsophisticated culture, inartificial taste and an unpretending outside, lay a power and fire that might have informed the brain and kindled the veins of a hero; but she had no worldly wisdom—her powers were unadapted to the practical business of life—she would fail to defend her most manifest rights, to consult her legitimate advantage. An interpreter ought always to have stood between her and the world. Her will was not very flexible and it generally opposed her interest. Her temper was magnanimous, but warm and sudden; her spirit altogether unbending.”

Terrible difference between ideas and truth

Disinterested, headstrong, noble Emily Brontë, at this time, while your magical sister was weaving for you, with golden words, a web of fate as fortunate as dreams … you were never to see the brightest things in life. Sisterly love, free solitude, unpraised creation, were to remain your most poignant joys. No touch of love, no hint of fame, no hours of ease, lie for you across the knees of Fate. Neither rose nor laurel will be shed on your coffined form. Meanwhile, your sister writes and dreams for Shirley. Terrible difference between ideas and truth; wonderful magic of the unreal to take their sting from the veritable wounds we endure!

Neither rose nor laurel will we lay reverently for remembrance over the tomb where you sleep; but the flower that was always your own, the wild, dry heather. You, who were, in your sister’s phrase, “moorish, wild and knotty as a root of heath,” you grew to your own perfection on the waste where no laurel rustles its polished leaves, where no sweet, fragile rose ever opened in the heart of June.

But now you live, still singing of freedom, the undying soul, of courage and loneliness, another voice in the wind, another glory on the mountain-tops, Emily Brontë, the author of Wuthering Heights.

Condensed from Emily Brontë by Mary F. Robinson, 1883. Follow this link to read the entire chapter.

*This post contains affiliate links. If the product is purchased by linking through, Literary Ladies Guide receives a modest commission, which helps maintain our site and helps it to continue growing.