Anne Brontë, Author of The Tenant of Wildfell Hall 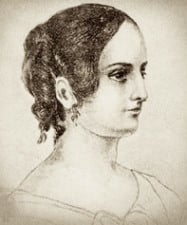 Anne Brontë (January 17, 1820 – May 28, 1849) was a British author born in Thornton, West Yorkshire, the daughter of Patrick Brontë, a clergyman, and Maria Branwell. She followed in her older sisters’ (Charlotte and Emily Brontë) paths by delving into the literary world as a novelist and poet.

Along with her sisters and brother Branwell, Anne grew up in Haworth, an isolated town on the moors of Yorkshire. She was one of six siblings raised by her father after the death of their mother.

Anne was only about a year old when their mother died of cancer. The children’s aunt Elizabeth Branwell acted as a surrogate parent and helped inspire Anne spiritually, as their relationship was the closest of all.

In terms of birth order, first came Maria, named for their mother, then Elizabeth. Each of them died of illness around the age of ten, possibly from having been exposed to poor conditions at the school to which they’d been sent. Then came Charlotte, followed by Branwell, the only brother, then Emily and finally Anne, the youngest.

Anne’s make-believe world, Gondal, became the setting for many of her literary pieces. She and Emily, with whom she was closest, created the kingdom of Gondal, yet another fictional world that lay in the North Pacific. 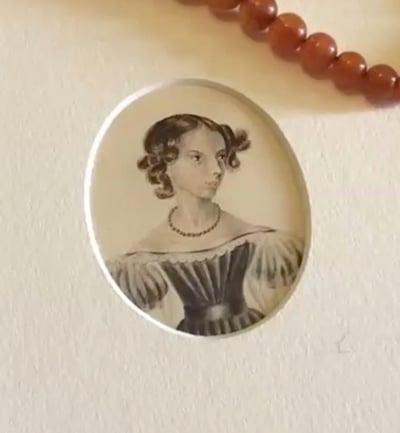 This is thought to be a drawing of Emily by Charlotte, with their mother’s amber beads. From the collection of The Brontë Parsonage Museum.

In her sisters’ footsteps

Like her sisters, Anne spent much of her life at the family parsonage in Haworth, England, on the Yorkshire moors. She left home briefly to attend a boarding school while in her teens, and at age nineteen, began working as a governess. These experiences wove themselves into her first novel, Agnes Grey.

Following in the footsteps of her sisters, she studied at Roehead School, where she began to write poetry. Her work had themes of emotional attachment to her home, which she ultimately had to leave, determined to support herself.

It is suspected that Anne and William Weightman, a curate in Haworth where she grew up, fell in love. Poetry exchanged and character inspiration suggests that their relationship was built on mutual fondness. When William died, Anne’s poetry contained motifs of grief and longing for connection.

Her poetry, though skillful, wasn’t nearly as brilliant as Emily’s, became part of a volume of poems, along with Charlotte’s, and published in 1846. Titled Poems by Currer, Ellis, and Acton Bell, the volume, sold a humiliating total of two copies, did not dampen the sisters’ desired to continue writing and pursuing publication. 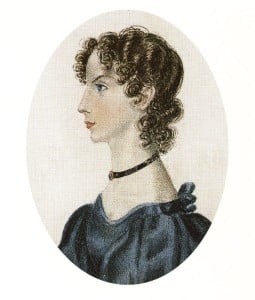 Anne — the woman and the myth

Modernist author May Sinclair had some keen observations of the brilliant literary trio in her 1912 book, The Three Brontës. Of Anne, she writes with regret of her relative obscurity:

“Of these tragic Brontës the most tragic, the most pitiful, the most mercilessly abused by destiny, was Anne. An interminable, monstrous exile is the impression we get of Anne’s life in the years of her girlhood. There is no actual record of them.

Nobody kept Anne’s letters. We never hear her sad voice raised in self-pity or revolt. It is doubtful if she ever raised it. She waited in silence and resignation, and then told her own story in Agnes Grey. But her figure remains dim in her own story and in the classic ‘Lives’.

We only know that she was the youngest, and that, unlike her sisters, she was pretty. She had thick brown curling hair, and violet-blue eyes, and delicate dark eyebrows, and a skin rose and white for her sisters’ sallow, that must have given some ominous hint of fever. This delicate thing was broken on the wheel of life.

They say of Anne perpetually that she was ‘gentle.’ In Charlotte’s sketch of her she holds her pretty head high, her eyes gaze straight forward, and you wonder whether, before the breaking point, she was always as gentle as they say. But you never see her in any moment of revolt. Her simple poems, at their bitterest, express no more than a frail agony, an innocent dismay. That little raising of the head in conscious rectitude is all that breaks the long plaint of Agnes Grey.”

Agnes Grey, Anne’s debut novel took inspiration from her time teaching at the Ingham family’s Blake Hall. Dissatisfied with her performance, the Ingham family let Anne go after a year, but the experience influenced her writings. Agnes Grey was published in 1847 by the same publisher of Emily’s Wuthering Heights. Its second edition was published in 1850, a year following Anne’s death.

The story of Agnes Grey, a young governess, is based on Anne’s unhappy experiences in this line of work, something she did for five years. It highlights the precarious nature of the work, and its unremitting hours and accumulated humiliations for little reward.

With Agnes Grey, Anne gained an outlet for her views on the oppression of women, especially poor women, and the isolating nature of the job of caring for other people’s children.

Critics have generally felt that Agnes Grey is a less assured work than Anne’s second novel, The Tenant of Wildfell Hall. It’s still worth a read as part of the Brontë canon, containing shrewd character sketches and observations about the limited opportunities for females in that time.

Anne spent more time away from the family home in Haworth than her sisters, which allowed for her experiences to come through in her writing. She expressed progressive observations, as well as a feminist bent.

The Tenant of Wildfell Hall

Anne’s second novel, The Tenant of Wildfell Hall (1848) was more popular than Agnes Grey, yet never achieved the renown of Charlotte’s novels. Like Agnes Grey, it was written under the pen name of “Acton Bell” to obscure her gender.

Both of Anne’s novels, as well as her poems, contain many autobiographical elements that correspond with events and people prominent in her life.The Tenant of Wildfell Hall is considered a groundbreaking feminist novel.

May Sinclair, the modernist writer, wrote of The Tenant in her 1912 book The Three Brontës:

“Anne took her courage in both hands when she sat down to write The Tenant of Wildfell Hall. There are scenes, there are situations, in Anne’s amazing novel, which for sheer audacity stand alone in mid-Victorian literature, and which would hold their own in the literature of revolt that followed. It cannot be said that these scenes and situations are tackled with a master-hand. But there is a certain grasp in Anne’s treatment, and an astonishing lucidity.”

Find more of this passage here.

All through the late 19th and early 20th century, fascination with the Brontë sisters continued on both sides of the Atlantic. The Brooklyn Daily Eagle, as part of a May 1900 article on the literary sisters’ lives, citing insights by Mary A. Ward (1851 – 1920; an early Brontë biographer). The article read, in part:

“Anne serves a twofold purpose in the study of what the Brontë wrote and were. In the first place, her gentle and delicate presence; her sad, short story; her hard life and early death, enter deeply into the poetry and tragedy that have always been entwined with the memory of the Brontë, as women, and as writers.

In the second, the books and poems that she wrote serve as a matter of comparison by which to test the greatness of her two sisters. She is the measure of their genius — like them, yet not with them.”

It is Mrs. Ward’s opinion that The Tenant of Wildfell Hall shows the effect of Branwell Brontë’s dissipation. He was a victim of both opium and drink, and he seems to have led his sisters to believe that he was the possessor of all manner of dark and guilty secrets.

They did not know enough of the world to differentiate between the frenzied dreams of an opium drunkard and the reality; there is no reason to think that the offenses of which he accused himself had any other origin than in his own disordered mind.

The Tenant of Wildfell Hall bears traces of these supposed forbidding revelations — revelations that had a most unhappy effect on his three sisters. Their brother’s fate could be borne by Charlotte and Emily; it crushed Anne.

It seems strange that so gentle a creature as Anne — “Acton Bell” — should have written such a book as The Tenant of Wildfell Hall. She is said to have written it as a warning, and the necessity for it is believed to have had its origin in her belief in her brother’s fancied revelations of his own moral turpitude.

The early death of Anne Brontë

Unfortunately, the literary career of this talented writer was cut short, as she hadn’t yet turned thirty when she died of was called consumption (pulmonary tuberculosis) in 1849.

The shock of Emily’s death weakened Anne, and she fell ill with what was thought to be the flu. But alas, it was also consumption. Anne, characteristically, faced the news with courage, though she was disappointed that she would not have the chance to further her ambition as a writer.

Her last poem was “A Dreadful Darkness Closes In” — describing an imminent death. She wrote to Ellen Nussey, a dear friend she shared with Charlotte:

“I have no horror of death: if I thought it inevitable I think I could quietly resign myself to the prospect… But I wish it would please God to spare me not only for Papa’s and Charlotte’s sakes, but because I long to do some good in the world before I leave it. I have many schemes in my head for future practice — humble and limited indeed — but still I should not like them all to come to nothing, and myself to have lived to so little purpose. But God’s will be done.”

Over the next few months, Anne regained some strength and was even able to travel to Scarborough. It was hoped that a change of scene and fresh sea air would improve her health, but it was not to be. When death was at hand, she was unable to travel back to Haworth and died in Scarborough on May 28, 1849, at the age of twenty-nine. 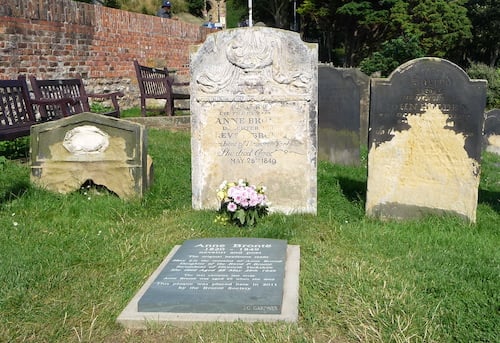 The Legacy of Anne Brontë

A year after Anne’s death, Charlotte did something that was quite surprising, bordering on unforgivable: She prevented the re-publication of The Tenant of Wildfell Hall.

Charlotte remarked in 1850, “Wildfell Hall  hardly appears to me desirable to preserve. The choice of subject in that work is a mistake, it was too little consonant with the character, tastes and ideas of the gentle, retiring inexperienced writer.”

The result was that Anne’s work received far less critical attention for many decades, and she was viewed as a minor Brontë whose talent was inferior to that of her sisters. Much later, her work was reassessed, and contemporary biographies and criticism have given her the credit she’s due as an important literary figure.

The Tenant of Wildfell Hall is now regarded as a major piece of literature. In 2013, Sally McDonald of the Brontë Society noted that Anne Brontë is “now viewed as the most radical of the sisters, writing about tough subjects such as women’s need to maintain independence and how alcoholism can tear a family apart.”

Visit the Brontë’s Birthplace and Home