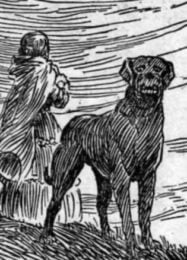 Though Emily Brontë (1818 – 1848) only lived to the age of thirty, she produced Wuthering Heights, one of the most iconic novels in the English literary canon. For an avowed introvert such as Emily was, her dog, Keeper, became one of the few and most faithful companions of her adult life.

The sister of Charlotte and Anne Brontë, Emily didn’t care for company outside of her immediate family, and any time she ventured from her beloved Yorkshire moors, she became sick with longing to return.

In addition to Keeper, a large and rather menacing dog, there were other dogs and cats in residence at the Brontë Parsonage over the years. A Cavalier King Charles Spaniel named Flossy belonged to Anne. Like her mistress, Flossy could be both gentle and strong-willed. She was as solely devoted to Anne as Keeper was to Emily.

The mutual devotion between Emily Brontë and her dog was surprising, given the brutal way in which Emily asserted her role as the “alpha” of the two. But once dog and mistress settled on who was in charge, it became a story of a dog’s undying loyalty for his mistress, and hers for him. 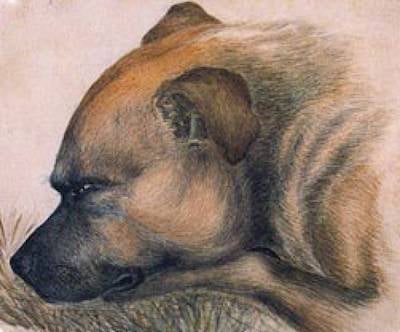 First, we’ll hear the story as told by by Albert Payson Terhune as it appeared in The Baltimore Sun, January 9, 1927. Though the Brontë had been long gone, there was still, at the time, an incredible amount of fascination with them on both sides of the pond:

Up in the bleakest corner of the Yorkshire moors, the little village of Haworth clings to its bare hillside. It is like a hundred other desolate hamlets in the same region; except that once it was the dwelling place of the Brontë sisters, three strange literary geniuses whose fame became worldwide.

They were the daughters of the local clergyman, Patrick Brontë, whose life was soured by the drunkenness and early each of his only son, Branwell. I spent a few days at Haworth and visited the parsonage long after the last of the Brontës died. That visit made me understand the gloom of the three Brontë girls’ lives.

Charlotte Brontë is best remembered for her novel, Jane Eyre. Emily wrote one gripping and powerful book, Wuthering Heights. Anne was the gentlest of the trio, yet had a fortitude of her own. The Tenant of Wildfell Hall is her masterwork. Emily was the most unapproachable of the trio.

Affection for a dog with “the nature of a brute”

The bulk of Emily’s affection was lavished on a gigantic dog, half mastiff, half bulldog. His name was Keeper and in at least one of the Brontë books his character is drawn with wondrous skill. The man who gave Keeper to Emily also gave him a doubtful reputation by writing to her the following account of the big dog:

“Though he is faithful to the depths of his nature as long as he is with friends, yet who strikes him rouses the relentless nature of the brute who flies at such man’s throat, therewith, and holds him there until one or the other is at the point of death.

Emily knew little about dogs, and such a warning as came with Keeper would have scared a less courageous woman that she. But she welcomed Keeper and set about to win his love and confidence.

It was a hard job, but less hard perhaps if both dog and mistress had not been of the same stubborn nature. Presently a strong friendship grew between them. Keeper became Emily’s shadow, following her everywhere.

But the presence of the great dog in the primly quiet parsonage was not an unmixed pleasure to anyone. He did whatever he chose to, and none dared punish him for fear of a murderous attack.

For instance, he would pick out the cleanest and most comfortable bed in the house and would go to sleep on it, refusing to move when ordered to. A growl would accompany his refusal, and with it, a savage show of teeth. 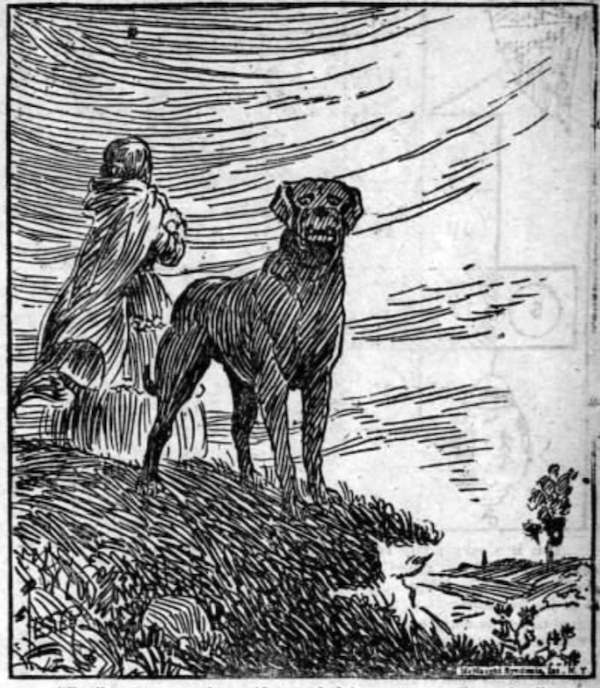 Showing Keeper who was in charge

Emily did not chance to discover him lying thus on her bed until the rest of the household had complained often and bitterly. But when one day she did discover him stretched out on her counterpane with his muddy paws smearing it she went into immediate action.

She ordered Keeper to get down from the bed. As usual he merely snarled and showed his teeth. Emily rushed at him and seized him by the neck, dragging him off the bed and out of the room and down the stairs. As no whip was handy she beat him furiously about the head with her bare fists until his eyes were swollen and his nose bleeding.

So sudden and so ferocious was her assault on him, and so fearless was it, that Keeper did not so much as try to defend himself from the beating. He stood snarling and growling, but making no move to attack his assailant while the stinging rain of frantic fist-blows landed on his shaggy head and face.

When the beating was over it was Emily herself who bathed and sponged his swollen face. From that hour Emily and Keeper were perfect chums.

She even undertook to teach him a single trick. The trick consisted of roaring furiously at at man who called at the parsonage and leaping at the guest’s throat. The roar and the leap were merely playful, though they did not give that impression.

Emily said she used to judge men by the way they behaved under such nerve-shaking treatment. He who shrank from the dog’s noisy assault was deemed by her a coward and unworthy of future notice.

The Yorkshire Moorland around Haworth was lonely and frequented sometimes by doubtful characters. But Emily used to walk over it for miles with Keeper at her side. She was as safe with such an escort as if she had been guarded by a troop of cavalry.

Loyalty to Emily beyond the grave

When Emily Brontë died, Keeper insisted on crouching close beside her coffin until the hour of burial. Then, as chief mourner, he followed it to the grave in the nearby churchyard. With great difficulty he was induced to leave the filled-in grave and follow the mourners back to the parsonage.

There, heavily, he made his way to the door of the room that had been Emily’s. The door was shut. Keeper lay down on the threshold, lifted his head, and shook the silent house with a series of unearthly howls. Nor for weeks thereafter would he move from that closed door of his own accord. To the time of his death, he slept there every night.

Charlotte was the last survivor of the Brontë siblings. She did what she could for Keeper’s happiness, but he never accepted her mastery nor ceased to grieve for Emily. You will find a character sketch of him in Charlotte’s novel, Shirley, where he appears under the name of Tartar.

Gradually, steadily, the old dog pined away. Charlotte tells of his end in a letter which is published in her biography. She wrote: “Keeper died last Monday. After being ill all night he gently went to sleep. We laid his old faithful head in the garden.”

From The Life of Charlotte Brontë by Elizabeth Gaskell (1857): The same tawny bull-dog (with his “strangled whistle”), called “Tartar” in Shirley, was “Keeper” in Haworth parsonage; a gift to Emily. With the gift came a warning. Keeper was faithful to the depths of his nature as long as he was with friends; but he who struck him with a stick or whip, roused the relentless nature of the brute, who flew at his throat forthwith, and held him there till one or the other was at the point of death.

Now Keeper’s household fault was this. He loved to steal upstairs, and stretch his square, tawny limbs, on the comfortable beds, covered over with delicate white counterpanes.  But the cleanliness of the parsonage arrangements was perfect; and this habit of Keeper’s was so objectionable, that Emily, in reply to Tabby’s remonstrances, declared that, if he was found again transgressing, she herself, in defiance of warning and his well-known ferocity of nature, would beat him so severely that he would never offend again.

In the gathering dusk of an autumn evening, Tabby came, half-triumphantly, half-tremblingly, but in great wrath, to tell Emily that Keeper was lying on the best bed, in drowsy voluptuousness.  Charlotte saw Emily’s whitening face, and set mouth, but dared not speak to interfere; no one dared when Emily’s eyes glowed in that manner out of the paleness of her face, and when her lips were so compressed into stone.

She went upstairs, and Tabby and Charlotte stood in the gloomy passage below, full of the dark shadows of coming night.  Down-stairs came Emily, dragging after her the unwilling Keeper, his hind legs set in a heavy attitude of resistance, held by the “scuft of his neck,” but growling low and savagely all the time.

The watchers would fain have spoken, but durst not, for fear of taking off Emily’s attention, and causing her to avert her head for a moment from the enraged brute.

She let him go, planted in a dark corner at the bottom of the stairs; no time was there to fetch stick or rod, for fear of the strangling clutch at her throat—her bare clenched fist struck against his red fierce eyes, before he had time to make his spring, and, in the language of the turf, she “punished him” till his eyes were swelled up, and the half-blind, stupified beast was led to his accustomed lair, to have his swollen head fomented and cared for by the very Emily herself.

And upon Emily’s death:

…  her old father, Charlotte, the dying Anne; and as they left the doors, they were joined by another mourner, Keeper, Emily’s dog. He walked in front of all, first in the rank of mourners; and perhaps no other creature had known the dead woman quite so well.

When they had lain her to sleep in the dark, airless vault under the church, and when they had crossed the bleak churchyard, and had entered the empty house again, Keeper went straight to the door of the room where his mistress used to sleep, and lay down across the threshold. There he howled piteously for many days; knowing not that no lamentations could wake her any more.

The generous dog owed her no grudge; he loved her dearly ever after; he walked first among the mourners to her funeral; he slept moaning for nights at the door of her empty room, and never, so to speak, rejoiced, dog fashion, after her death. He, in his turn, was mourned over by the surviving sister.