The Tragic Relationship of Sylvia Plath and Ted Hughes 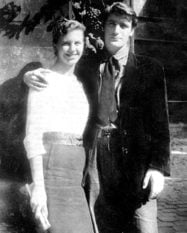 Sylvia Plath (1932 – 1963) was a gifted writer of poetry who ended her life at the age of thirty. Many of the truths behind her final years were exposed after her death, discovered in letters revealing the dark secrets of her tragic relationship with Ted Hughes.

Attractive, smart, and ambitious, she seemed to have what it took to succeed. But it was during her years at Smith College, where she was well-liked and academically adept, that she made her first attempt on her life.

Journal entries in her diary later revealed how much Plath struggled from that time on, until she took her own life. Her body of poetic work, much of it published posthumously, also reveals much about her state of mind during the brief journey of her adult life.

Plath first met poet Ted Hughes on February 25, 1956, at a party in Cambridge, England. In a 1961 BBC interview, Plath describes how she met him:

“I happened to be at Cambridge. I was sent there by the [U.S.] government on a government grant. And I’d read some of Ted’s poems in this magazine and I was very impressed and I wanted to meet him.

Then we saw a great deal of each other. Ted came back to Cambridge and suddenly we found ourselves getting married a few months later… We kept writing poems to each other.

Then it just grew out of that, I guess, a feeling that we both were writing so much and having such a fine time doing it, we decided that this should keep on.”

The couple married on June 16, 1956, and honeymooned in Benidorm, Spain. The following year, Plath and Hughes moved to the Massachusetts, where she taught at her alma mater, Smith College.

It was a challenge for her to find the time and energy to write when she was teaching. By the end of 1959, after another move and extensive travel, the couple moved back to London.

The couple had their first daughter, Frieda, on April 1st, 1960. The next year, Plath miscarried their second child. It was later revealed in a letter to her therapist, that Plath wrote about Hughes beating her two days before the miscarriage.

Several of her poems, including “Parliament Hill Fields,” address the loss. In 1962, their son Nicholas was born. And this is when things got complicated. 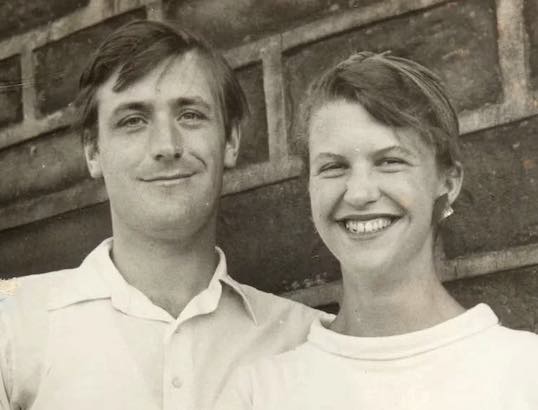 In May of 1962 Assia Wevill and her third husband, Canadian poet David Wevill, were invited to spend a weekend with Plath and Hughes, who were then living in the village of North Tawton in Devon, England.

It was then, as Hughes later wrote in a poem, that “The dreamer in me fell in love with her,” and a few short weeks later he embarked on his affair with Assia Wevill.

A few months after meeting Assia, Plath and Hughes took a holiday in Ireland. On the fourth day, Hughes disappeared to London to meet Wevill, with whom he embarked on a 10 day trip through Spain, the same place where Plath and Hughes had honeymooned.

Upon his arrival back home, the marriage unraveled when he refused to end his affair with Wevill. Plath and Hughes separated in July of 1962. Just before and several times after, Plath attempted to end her life.

Plath lived in a flat with her children during the gloomy winter of 1962 – 1963, basically functioning as a single parent to her baby son and toddler daughter. As is well known, she died by gassing herself in her kitchen while her children slept soundly in a room .

The months between her discovery of Hughes’ affair and her death were remarkably productive, and much of the poetry she produced during this period was published posthumously.

In 2017, a series of confidential letters from Plath to her psychiatrist, Dr. Ruth Barnhouse, came to light in which she alleged that Hughes was physically and psychologically abusive in the last years of their marriage.

The uncovered letters were written by Plath a week before she took her life. The discovery reignited flames that long engulfed one of the most famed and disastrous literary marriages.

The letters sent to Dr. Barnhouse (the inspiration for Dr. Nolan in Plath’s autobiographical novel The Bell Jar) are considered the only uncensored accounts of her last few months alive. At the same time, she was also producing some of her most enduring poetry, including the collection Ariel (posthumously published in 1965).

Through nine letters Plath reveals Hughes’ infidelity with Wevill. Also included in the collection are medical records from 1954, correspondence with Plath’s friends and interviews with Barnhouse about her therapy sessions with the poet. The archive came to light after an antiquarian bookseller put it up for sale for $875,000.

Plath writes her account of the physical abuse she endured shortly before miscarrying her second child in 1961, in a letter dated September 22, 1962 — the same month the couple separated. Several of Plath’s poems address her miscarriage, including Parliament Hill Fields: “Already your doll grip lets go.”

In the biography, Her Husband: Hughes and Plath — A Marriage, Diane Middlebrook portrayed Hughes as “a complicated, conflicted figure: sexually magnetic, fiercely ambitious, immensely caring, and shrewd in business.”

The author also argues that Plath’s death, “though it devastated Hughes and made him vulnerable to the savage attacks of Plath’s growing readership, ultimately gave him his true subject — re-creating himself for posterity through his marriage to Sylvia Plath and his struggles with his own historical circumstances.”

Plath and Hughes’ son Nicholas followed his mother’s tragic path, taking his own life on March 16th, 2009, at age 47. Their daughter, Frieda Hughes, is an artist and poet.

The relationship of Hughes and Assia Wevill was fraught and troubled. In a tragic twist of fate, the stresses of scrutiny over her continued relationship with Hughes, the disapproval of his family, and his continued infidelity took their toll on her.

In March 1969, Assia Wevill dragged a bed into the kitchen of her Clapham flat, dissolved sleeping tablets in a glass of water and gave the drink to her daughter (generally believed to be Hughes’ child) before finishing the rest herself.

Mirroring Plath’s method, she then turned on the gas stove and got into bed with her daughter; they never woke up.

It took decades for Hughes to speak out about his relationship with Plath. The collection “Birthday Letters” (1998) was his response to the feminist critics who spoke out against Hughes over his treatment of Plath, especially in the 1970s.

In 1970, Hughes was remarried to Carol Orchard. In response to the letters that surfaced in 2017 claiming Hughes’ abuse toward Plath, his wife went on record to say:

“The claims allegedly made by Sylvia Plath in unpublished letters to her former psychiatrist, suggesting that she was beaten by her husband, Ted Hughes, days before she miscarried their second child are as absurd as they are shocking to anyone who knew Ted well.”

The couple remained married until Hughes’ death in 1998.

When Plath took her life, she was still married to Hughes, though the couple was separated. Thus, he inherited her literary estate and oversaw her posthumous legacy.

Much of Plath’s work was unpublished at the time of her death, and Hughes oversaw the publication of some of the collections she left behind. The position he was in was quite fraught, not surprisingly.

Erica Wagner, in Ariel’s Gift: Ted Hughes, Sylvia Plath, and the Story of Birthday Letters covers the poet’s complicated legacy and Ted Hughes’ role in it. In the Wagner’s introduction, she writes:

“Hughes’ circumstances were not easy. On one hand, he was faced with an artistic duty to the work of his late wife; on the other, with his wish to protect himself and his family from the intrusions and accusations of the press and the reading public. The difficulty was compounded by the nature of Plath’s work: her unflinching gaze was forever directed at herself and those around her. She drew almost exclusively on her own experience.

… Her expression of dissatisfaction with her marriage — revealed posthumously— combined with Ted Hughes’ continuing editorial control over her material was an explosive mix.”

In 1965 Hughes released Ariel, a collection of poems Plath wrote expressing her battle with the darkness of depression, and of her relationship with her husband.

Hughes was accused of altering the order of the poems and using selective editing in an attempt to preserve his reputation. He had omitted twelve poems that Plath had earmarked for the collection, and included twelve others of his own choosing. In 2004, a restored edition of Ariel was published.

Through the 1970s Hughes continued to release Plath’s poems, but was met with criticism over his selections and decisions of what works to release.

Books about Plath and Hughes’ relationship