Ariel by Sylvia Plath — a review and analysis 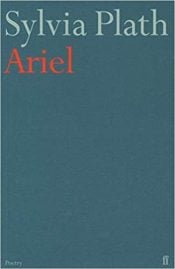 Ariel was the second published collection by Sylvia Plath (1932 – 1963). It came out two years after she took her own life at age thirty. Following is an analysis of Ariel by Sylvia Plath as well as a review, both from 1965, the year in which it was first published.

Plath’s poetry, considered part of the “confessional movement,” was influenced by Robert Lowell as well as by her friend, the poet Anne Sexton, who also explored dark themes and death in her work (and who, like Plath, committed suicide). Depression had been a constant companion, leading to a life of struggle that was reflected in her work.

Once Plath started to publish, her star quickly rose in the world of poetry. Her first collection, The Colossus, was published in 1960. Its poems were intense, personal, and delicately crafted. In Ariel, the beauty of craft remains even as it reveals the fissures growing in the poet’s psyche. According to the Penguin Companion to American Literature:

“The Colossus (1960) and the posthumous Ariel (1965) show a remarkable development. The first is a largely personal poetry, intense and delicately rendered, usually dealing with the relationship of the poet and a perceived object from which she seeks illumination, ‘that rare, random descent.’

It is controlled, serious verse but her later work shows new strains and pressures at work and becomes a poetry of anguished confession.”

The 1965 edition revealed the heavy hand of Ted Hughes. He had omitted twelve poems that Plath had earmarked for the collection, and included twelve others of his own choosing. In 2004, a restored edition of Ariel was published.

Following are two reviews of Ariel from 1965, the first of which is by A. Alvarez, a longtime champion of Plath and her poetry, and a poet in his own right. 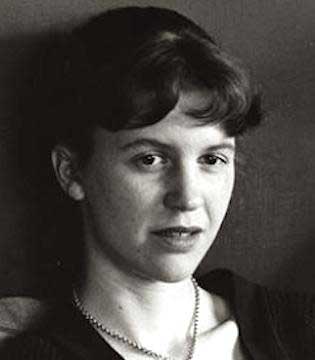 Poetry in Extremis — an analysis of Ariel

From the original review in The Observer, March 14, 1965, written by A. Alvarez: It is over two years now since Sylvia Plath died at the age of thirty, and in that time a myth has been gathering around her work.

It has to do with her extraordinary outburst of creative energy in the months before her death, culminating in the last few weeks when, as she herself wrote, she was at work every morning between four and seven, producing two sometimes three poems a day.

All of these last verses were intensely personal, nearly all were about dying. So when her death finally came it was prepared for and, in some degree, understood.

However wanton it seemed, it was also, in a way, inevitable, even justified, like some final unwritten poem.

The last works were something quite new in poetry. I wrote at the time in The Observer that Plath was “systematically probing that narrow, violent areas between the viable and the impossible, between experience which can be transmuted into poetry and that which is overwhelming.”

In order to tap knowingly the deep reservoirs of feeling that are released usually only in breakdown she was deliberately cutting her way through poetic conventions, shedding her old life, old emotions, old forms. Yet she underwent this process as an artist.

If the poems are despairing, vengeful, and destructive, they are at the same time tender, open, and also unusually clever, sardonic, hard minded:

The myth, then, is a diversion from the objective achievement. For the very reason that it has an originality that keeps it apart from any poetic fads. It is too concentrated and detached and ironic for “confessional” verse, with all hat implies of self-indulgent cashing-in on misfortunes; and it is violent without any deliberate exploitation of horrors and petty nastiness.

If these last poems could never have been predicted from her first collection, The Colossus, this is not simply because such a leap is always unforeseeable, but because her earlier absorption with style would, in the the usual order of things, have made it doubly hard for her to bore through the crust of mere craftsmanship and release the lava below.

Technically, the basic difference between the earlier and later poems is that the first were written for the eye, and the last for the ear. They need to be read aloud; they are original because she discovered in them her own speaking voice, her own identity.

So the poems run with an inner rhythm which alters with the pressure of feeling and allows the images, which came crowding in with an incredible fertility and accuracy, to shift into one another, define and modify one another, and rub off colors each on the next.

To take a straightforward example from “The Arrival of the Bee Box”:

I put my eye on the grid.
It is dark, dark.
With the swarm feeling of African hands
Minute and shrunk for export.
Black on black, angrily clambering.

How can I let them out?
It is the noise that appeals me most of all,
The unintelligible syllables.
It is like a Roman mob,
Small, taken one by one, but my god,
together!

I lay my ear to furious Latin,
I am not Caesar.
I have simply ordered a box of maniacs.
They can be sent back.
They can die, I need feed them nothing, I
am the owner.

It starts as simple narrative description; but as “dark” is repeated it is somehow made to reverberate inwardly, crystallizing into a metaphor which voices her underlying sense of threat.

That menace carries over into the next bit of description (of the noise) and shift, though another image, into wry helplessness (“I am not Caesar”); at which point a sense of proportion reasserts itself: “They can die … I am the am the owner.”

So a trivial incident gathers into a whole complicated nexus of feelings about the way her life is getting out of control. It is a brilliant balancing act between colloquial sanity and images which echo down and open up the depths.

Many of the poems are more difficult than that, rawer, more extreme. But all have that combination of exploratory invention, violent, threatened personal involvement and a quizzical edge of detachment. The poems are casual yet concentrated, slangy yet utterly unexpected.

They are works of great artistic purity and despite all the nihilism, great generosity.

Ariel is only a selection from a mass of work Plath left. Some of the other pomes have been printed here and there, some have been recorded, some exist only in manuscript. It is to be hoped that all this remaining verse will soon be published. As it is, this book is a major literary event. 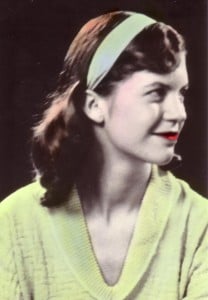 A 1965 review of Ariel by Sylvia Plath

From the original review in The Age, Melbourne, Australia, July 10, 1965: Sylvia Plath was born in Boston, Massachusetts, in 1932. In 1956, while studying on a Fulbright grant, she met and married the poet Ted Hughes. In 1960 her first book of poems appeared, and in 1963, she committed suicide.

The poems written in the last three years of her life have been gathered in a volume titled Ariel.

They are difficult, uncertain poems, some extremely obscure and all primarily dependent on central images. Formal rhythm and the logic of rational statement are both dispensed with, the main principle of organization being a free-association technique.

How does a doomed poetess in her late twenties see death? Sylvia Plath was, in poetry at least, a stubbornly brave young woman, determined to face reality objectively, but at the same time neither to posture nor to cant.

The poems witness to a singularly pure sense of reality, a personality capable of many responses and of sustaining an attitude effectively. At one extreme she celebrates the ritual murder of her subconscious father-image in jangling staccato phrases parodying the clichés of agony column verse, and culminating in a Walpurgisnacht frenzy.

At the other she writes bitterly of her ability to survive:

It’s the theatrical
Comeback in broad day
To the same place, the same face, the same brute
Amused shout:
“A miracle!”
That knocks me out.

Some of her images take on forceful private meanings. Poppies are associated with violence and with the malignant blood cells of hemophilia, the Medusa head with the reality of death, bees with the life of the soul after death.

The last of the is a traditional usage, the other two subjective and personal. Such associations and identifications when they occur are almost always oblique and contribute to the enigmatic texture of the poetry.

Her achievement raises issues concerning the value of literature and its relation to life. The last poem suggests that words are dubious allies in the struggle to maintain a sense of reality. They are solid and fixed and resonant, abut as circumstances alter, they become emptied of meaning.

Years later I
Encounter them on the road —
Words dry and riderless,
The indefatigable hoof-taps
While
From the bottom of the pool, fixed
stars
Govern a life.

Nevertheless, her own work affirms the abiding value of literary creation, for poet and reader alike. It is no mean feat to have recorded an enduring attitude to death that embraces a sense of life in the face of suffering and weakness.

Plath’s poems are a tribute to the resourcefulness of the creative imagination and its capacity to render meaningful the hazardous course of an individual life. 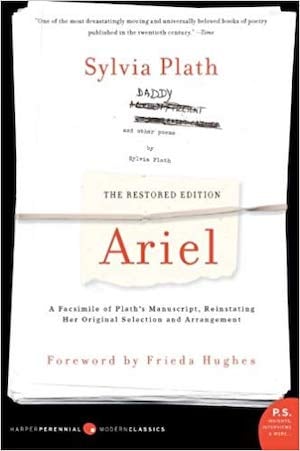 More about Ariel by Sylvia Plath