Dust Tracks on a Road by Zora Neale Hurston (1942) 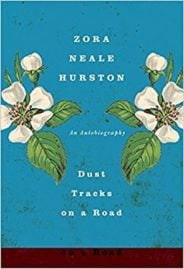 Dust Tracks on a Road, Zora Neale Hurston’s 1942 autobiography, has confounded critics and scholars from the time of its publication, even as it has enthralled and entertained readers.

It was the most commercially successful book she published during her lifetime, though it has since been eclipsed by her 1937 novel, Their Eyes Were Watching God.

Zora (1891 – 1960) studied anthropology at Barnard College in the 1920s, becoming the first African-American student at the prestigious college. With her larger-than-life personality, she quickly became a big name in the Harlem Renaissance movement of the 1920s.

She pursued a career as an ethnographer, collecting stories from the oral traditions of the Black south and the cultures of the Caribbean. At the same time, she wrote fiction, plays, and essays.

When her publisher urged her to write the autobiography that became Dust Tracks, Zora balked. She was only in mid-career, she protested. But she relented because, as always, she needed the funds.

The question has always remained, is Dust Tracks true memoir, or is her life story, as she tells it, more impressionistic rather than realistic? It’s likely a bit of both, something that readers can only guess now. 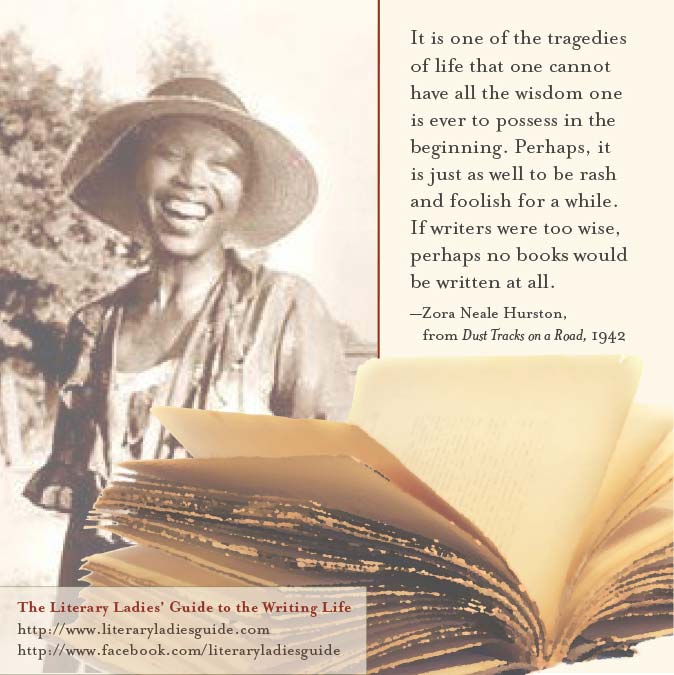 In her Foreword to the 2006 edition, Maya Angelou wrote:

“Zora Neale Hurston chose to write her own version of life in Dust Tracks on a Road. Through her imagery one soon learns that the author was born to roam, to listen, and to tell a variety of stories.

An active curiosity led her throughout the South, where she gathered up the feelings and sayings of her people as a fastidious farmer might gather eggs. When she began to write, she used all the sights she had seen, all the people she encountered and the exploits she had survived …

In this autobiography, Hurston describes herself as obstinate, intelligent, and pugnacious. the story she tells of her life could never have been told believably by a non-Black American, and the details even in her own hands and words offer enough confusions, contusions, and contradictions to confound even the most sympathetic researcher.”

“Dust Tracks can be a discomfiting book, and it has probably harmed Zora’s reputation. Like much of her career, it often appears contradictory. Zora seems to be both an advocate for the universal, demonstrating that this Black woman does not look at the world in racial terms, and the celebrant of a unique ethnic upbringing in an all-Black village.

Dust Tracks begins with Zora as she grows to adulthood, moving from rustic security toward college and career … She describes herself as a bright, combative, overly imaginative child who had a difficult time between her mother’s death and her college success, but who persevered, and was served well by the values learned in Eatonville.

The final two-fifths of the book self-consciously, and at times simplistically, ranges through love, religion, friendship; it explains why Zora has ‘no race prejudice of any kind.’

When she selects a story from the repertoire of her life and narrates it for her audience, Dust Tracks succeeds. It fails when she tries to shape the narrative into a statement of universality, manipulating events and ideas in order to suggest that the personal voyage of Zora Neale Hurston is something more than the special experience of one Black woman.

… That is the chief value of her autobiography — its documentation of the Eatonville scene and what it meant to be a woman who would rise by force of will and talent to become nationally known.”

Mary Helen Washington, in an introduction to one of the book’s later editions, wrote that the book is “filled with evasion, posturing, and all kinds of self-concealment.”

Despite these critical misgivings, Dust Tracks is a wise, warm, and entertaining read by an American writer who was one of a kind. A description from the official Zora Neale Hurston website gives a counterweight argument to the more problematic viewpoints:

“First published in 1942 at the height of her popularity, Dust Tracks on a Road is Zora Neale Hurston’s candid, funny, bold, and poignant autobiography, an imaginative and exuberant account of her rise from childhood poverty in the rural South to a prominent place among the leading artists and intellectuals of the Harlem Renaissance.

As compelling as her acclaimed fiction, Hurston’s very personal literary self-portrait offers a revealing, often audacious glimpse into the life—public and private—of an extraordinary artist, anthropologist, chronicler, and champion of the Black experience in America.

Full of the wit and wisdom of a proud, spirited woman who started off low and climbed high, Dust Tracks on a Road is a rare treasure from one of literature’s most cherished voices.”

The following brief passages from Dust Tracks on a Road offer a glimpse of its contents.

“I was born in a Negro town. I do not mean by that the Black back-side of an average town. Eatonville, Florida is, and was at the time of my birth, a pure Negro town — charter, mayor, council, town marshal and all.

It was not the first Negro community in America, but it was the first to be incorporated, the first attempt at organized self-government on the part of Negroes in America.

… So, looking back, I take it that Papa and Mama, in spite of his meanderings, were really in love. Maybe he was just born before his time. There was nothing then to hinder impulses.

Mama exhorted her children to “jump at de sun.” We might not land on the sun, but at least we would get off the ground. Papa did not feel so hopeful. Let well enough alone. It did not do for Negroes to have too much spirit. He was always threatening to break mine or kill me in the attempt. My mother was always standing between us.”

“One of the most serious objections to me was that having nothing, I still did not know how to be humble. A child in my place ought to realize I was lucky to have a roof over my head and anything to eat at all.”

While I was in the research field in 1929, the idea of Jonah’s Gourd Vine came to me. I had written a few short stories, but the idea of attempting a book seems so big, that I gazed at it in the quiet of the night, but hid it away from even myself in daylight.

For one thing, it seemed off-key. What I wanted to tell was a story about a man, and from what I had read and heard, Negroes were supposed to write about the Race Problem. I was and am thoroughly sick of the subject.

My interest lies in what makes a man or a woman do such and so, regardless of his color. It seemed to me the human beings I met reacted pretty much the same to the same stimuli. Different idioms, yes.

Circumstances and conditions having power to influence, yes. Inherent difference, no. But I said to myself that that was not what was expected of me, so I was afraid to tell a story the way I wanted or rather the way the story told itself to me. So I went down that way for three years.

Their Eyes Were Watching God

I wrote Their Eyes Were Watching God in Haiti. It was dammed up in me, I wrote it under internal pressure in seven weeks. I wish that I could write it again.

In fact, I regret all of my books. It is one of the tragedies of life that one cannot have all the wisdom one is ever to possess in the beginning.

Anyway, the force from somewhere in Space which commands you to write in the first place, gives you no choice. You take up the pen when you are told, and write what is commanded. There is no agony like a bearing and untold story inside you. 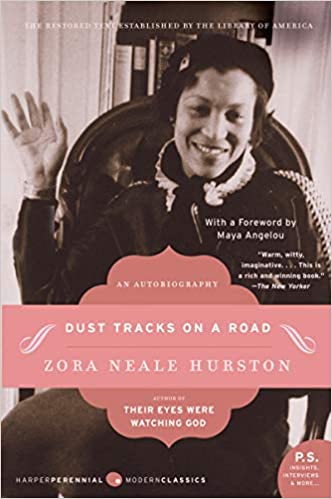 I can look back and see sharp shadows, high lights, and smudgy inbetweens. I have been in Sorrow’s kitchen and licked out all the pots. Then I have stood on the peaky mountain wrapped in rainbows, with the heart and a sword in my hands.

What I have to swallow in the kitchen has not made me less glad to have lived, nor made me want to low-rate the human race, nor any whole sections of it. I take no refuge from myself in bitterness …

If tough breaks have not soured me, neither have my glory-moments caused me to build any altars to myself where I can burn incense before God’s best job of work. My sense of humor will always stand in the way of my seeing myself, my family, my race, or my nation as the whole intent of the universe.

I see too, it while we all talk about justice more than any other quality on earth, there is no such thing as justice in the absolute in the world. We are too human to conceive of it. We all want the breaks, and what seems just to us is something that favors our wishes.

More about Dust Tracks on a Road by Zora Neale Hurston

*These are Bookshop Affiliate and Amazon Affiliate links. If aproduct is purchased by linking through, Literary Ladies Guide receives a modest commission, which helps maintain our site and helps it to continue growing!