Maya Angelou, author of I Know Why the Caged Bird Sings 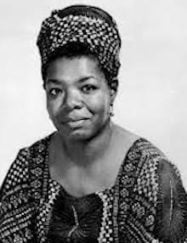 Her 1969 memoir, I Know Why the Caged Bird Sings, made literary history for being the first nonfiction best-seller by an African-American woman.

During her lifetime, she published seven autobiographies, three books of essays, and several books of poetry. Her autobiography series chronicled her childhood, youth, and early adult experiences.

Maya Angelou is also credited with writing a list of plays, movies, and television shows spanning more than 50 years. She received dozens of awards and more than thirty honorary doctoral degrees.

Maya and her older brother, Bailey Jr., were born to Vivian (Baxter) Johnson, a nurse. Their father, Bailey Johnson, worked as a doorman and navy dietitian. When Maya (so nicknamed by her brother) was three, her parents divorced and sent her and her brother to live with her grandparents in Stamps, Arkansas.

Four years later, Maya and her brother were shuttled back to live with her mother. At age eight, she was raped by her mother’s boyfriend, a man named Freeman. Jailed for only a day, Freeman was murdered four days after his release.

Maya retreated into solitude out of guilt, believing she was the reason he was murdered, and became mute for five years. Later she wrote, “I thought my voice killed him; I killed that man, because I told his name. And then I thought I would never speak again, because my voice would kill anyone …”

It has been said that during these years of silence is when Maya developed her extraordinary memory, cultivated her passion and love for books and writing, and developed her outstanding ability to observe and listen to the world around her.

Shortly after Freeman’s murder, Maya and her brother returned once again to their grandparents home in Stamps, Arkansas. She credits her relationships with her brother, Bailey, and a friend of the family, Bertha Flowers, with helping her to start speaking again.

Mrs. Flowers introduced Maya to a world of great authors who would influence and inspire her, including Charles Dickens, William Shakespeare, Frances Watkins Harper, and Jessie Redmon Fauset. 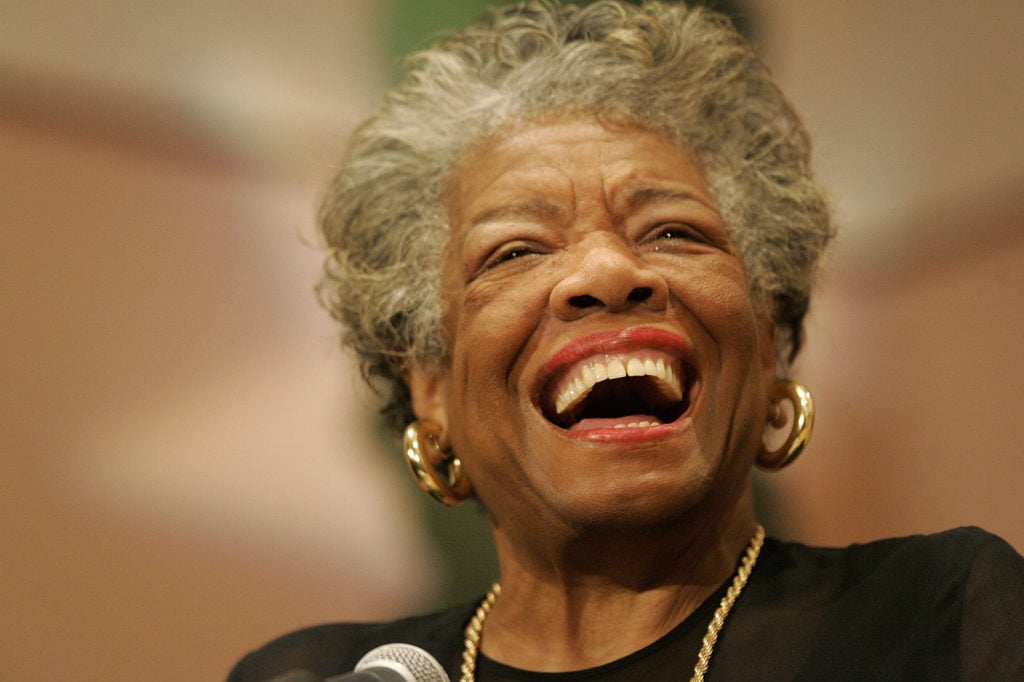 Wearer of many hats, practitioner of many talents

At age 14, Maya and her brother moved back in with their mother, who was then living in Oakland, California. Ever the groundbreaker, Maya became the first black female streetcar conductor in San Francisco. At age 17, a few weeks after graduating from the California Labor School, Maya gave birth to her son Clyde (who later changed his name to Guy).

In 1950, despite the scrutiny of interracial relationships and the disapproval of her mother, Maya was briefly married to Tosh Angelos, a Greek sailor. It was then that she explored artistic and creative performance. In early 1952, she adopted the surname Angelou.

She dived into a career in theatre, performing in Porgy and Bess and several Broadway plays such as Cabaret for Freedom, which she wrote with Godfrey Cambridge. In 1961, Maya performed in an off-Broadway production of The Blacks, with James Earl Jones, Lou Gossett, Jr., and Cicely Tyson. 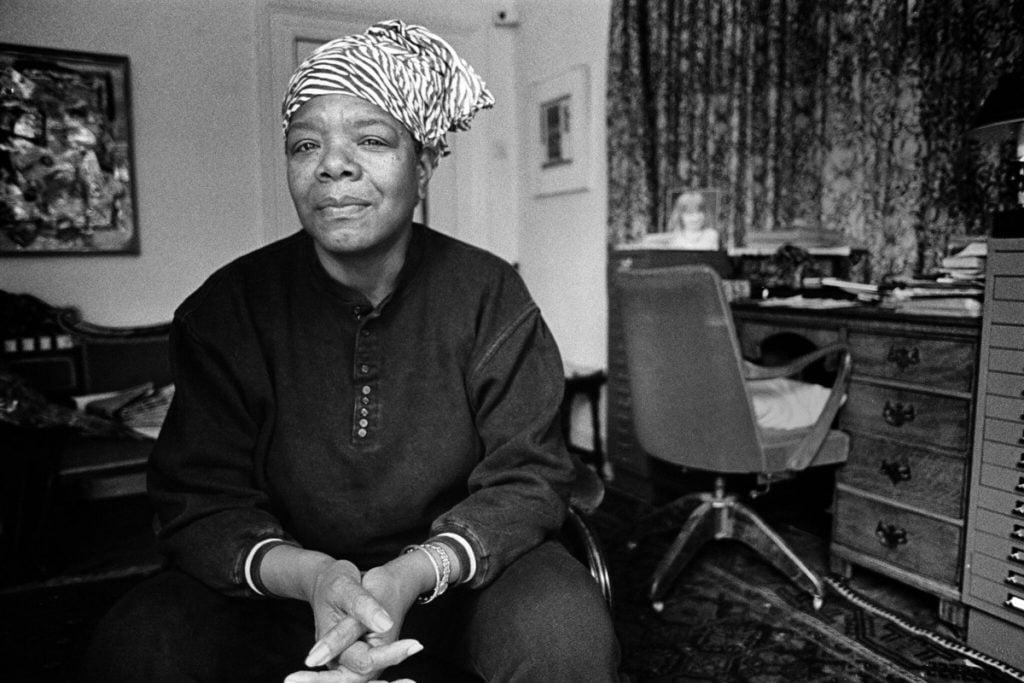 In the early 1960’s, Maya developed a relationship with South African freedom fighter Vusumzi Make, with whom she and her son, Guy, moved to Egypt. After they split in 1962, she and Guy moved to Ghana so that he could attend college, but he was severely injured in a car accident. They remained in Ghana until he completed his recovery in 1965.

In Ghana, Maya Angelou worked as an administrator at the University of Ghana, became an editor for The African Review, freelanced for the Ghanaian Times, and wrote and broadcast for Radio Ghana. She even worked and performed for Ghana’s National Theatre. A true wearer of many, many hats.

The company Maya kept included other intelligent, trailblazing individuals that influenced her own brilliance. While in Ghana, she became close with Malcolm X, and after she returned to the United States in 1965, she helped him build the Organization of Afro-American Unity.

Devastated after Malcom X’s assassination, Maya bounced around between a variety of jobs and roles — she acted, wrote plays. In the sixties, Martin Luther King Jr. asked her to be the northern coordinator for the Southern Christian Leadership Conference. King was assassinated on her 40th birthday on April 4th, 1968.

Slipping further into depression after the loss of another heroic friend, Maya was lifted out of her downward spiral by another close friend, James Baldwin.

Not long after, she once again tapped into her creative genius and stepped out of her comfort zone. She wrote, produced, and narrated Blacks, Blues, Black!, a ten-part series of documentaries about the connection between blues music and African heritage.

Maya’s first autobiography, I Know Why The Caged Bird Sings, was published in 1969. The book’s immediate success brought her international recognition. 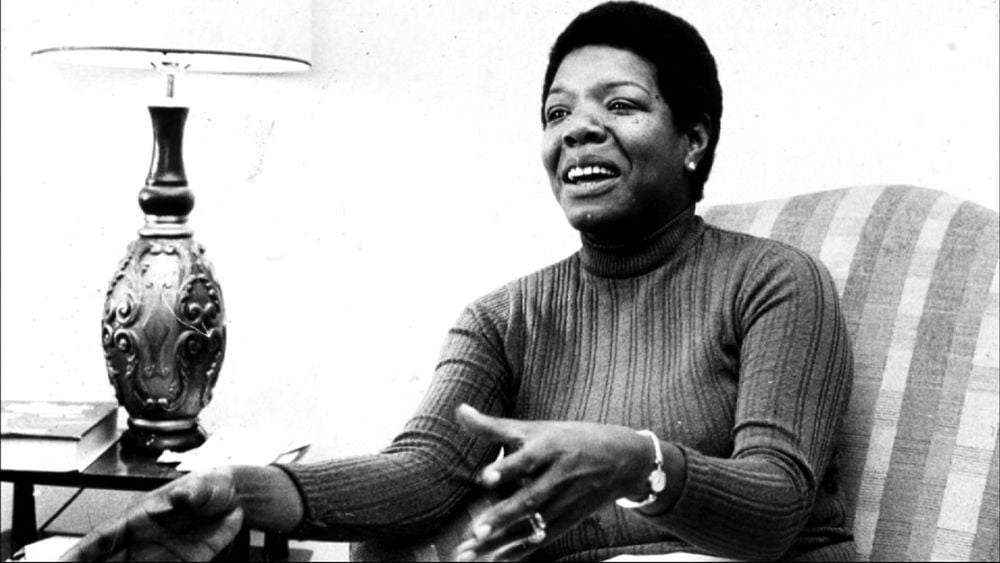 A tremendous life of many “firsts”

In 1972, Maya wrote Georgia, Georgia, becoming the first black woman to have a screenplay produced. Over the course of the next ten years, she accomplished more than most people achieve in a lifetime.

In 1973, she moved to Paris and married Paul du Feu, where she composed movie scores, wrote TV series, articles, poetry, short stories, and autobiographies, produced plays, and gave talks at universities and colleges.

In the late 1970’s, Maya met and befriended Oprah Winfrey, and the two become close friends.

After divorcing du Feu in 1981, Maya returned from Paris to the United States. Despite having no Bachelor’s degree, she accepted a job at Wake Forest University in North Carolina, becoming the first Reynolds Professor of American Studies. She was one of few full-time professors. Maya began to consider herself “a teacher who writes.”

In 1993, she became the first poet since Robert Frost to recite an original poem at a presidential inauguration. She recited her poem “On The Pulse Of Morning” at President Bill Clinton’s inauguration.

In 1995, Maya was praised for her two-year streak for remaining on The New York Times‘ paperback nonfiction best-seller list. This was the longest-running record in the chart’s history. 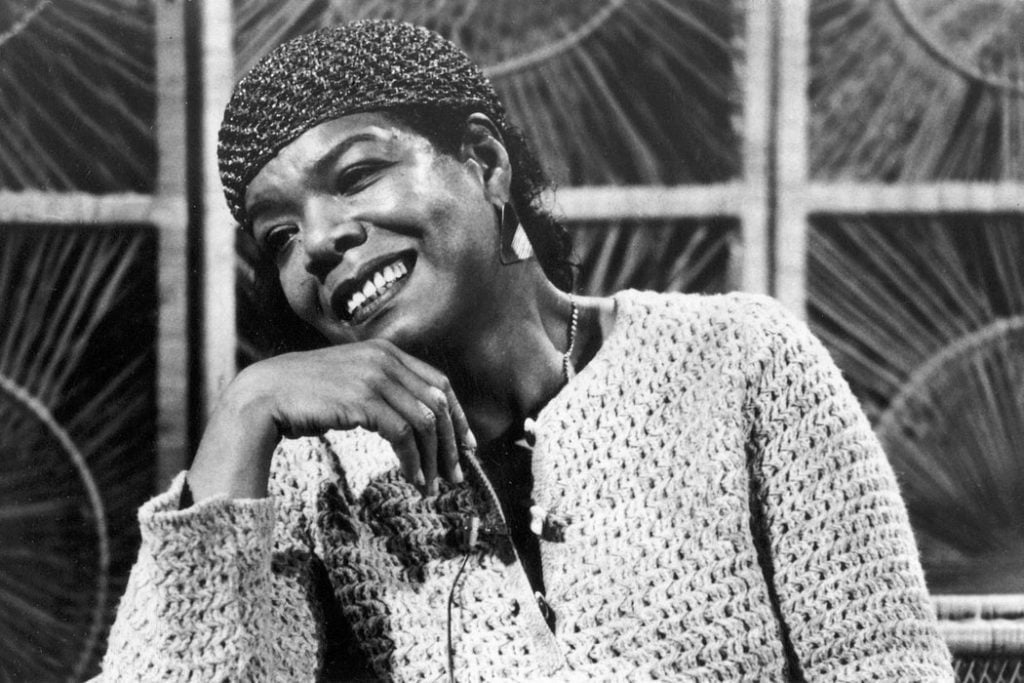 In 1975, Angelou received the Ladies’ Home Journal ‘s “Woman Of The Year Award” in communications. She was also appointed by President Jimmy Carter to the National Commission on the Observance of International Women’s Year

She was on the board of trustees of the American Film Institute and was one of the few female members of the Directors Guild.

Setting the bar high, Maya Angelou had a goal to direct a feature film, and achieved this 1996 when she directed Down in the Delta. It won the Chicago International Film Festival’s 1998 Audience Choice Award, and was recognized by  the Acapulco Black Film Festival in 1999.

Maya Angelou died on May 28, 2014, at her home in Winston-Salem, North Carolina. The news spread quickly and was mourned by many. Prominent public figures issued statements in her memory, including President Barack Obama, who stated Angelou was “a brilliant writer, a fierce friend, and a truly phenomenal woman.”

Maya Angelou’s body of writing was immense. Here’s a selection of some of her best known works.