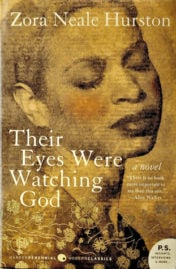 Zora Neale Hurston (1891 – 1960) was an African-American author and ethnographer. Their Eyes Were Watching God (1937), her third published book and second novel, is certainly her best known work and something of a feminist classic.

Zora had a dual career as a writer (producing novels, short stories, plays, and essays) and as an anthropologist. With her determined intelligence and humor, she became a big name in the Harlem Renaissance movement of the 1920s.

Janie, the story’s heroine, searches for independence, identity, love, and happiness over the course of twenty-five years and several relationships. This story is actually not unlike Zora’s own, though it could be argued that she never found true happiness.

An introduction to Their Eyes Were Watching God

In the Introduction to I Love Myself When I Am Laughing: A Zora Neale Hurston Reader, Mary Helen Washington contributed this insightful commentary on Zora’s masterpiece:

“In 1937 came the novel in which Hurston triumphed in the art of taking the imagery, imagination, and experiences of Black folk and making literature. Hurston says in her autobiography that she wrote the novel in seven straight weeks in the Caribbean after a love affair ended, and though the circumstances were difficult, she tried to ‘enbalm’ the novel with all of her tenderness for this man.

Perhaps because the novel’s main character, Janie Woods, has a succession of husbands and finally finds joy and fulfillment in her third marriage, the novel has generally been thought of as a love story, about love.

On a much deeper and more important level, however, its theme is Janie’s search for identity, an identity which finally begins to take shape as she throws off the false images which have been been thrust upon her because she is both black and woman in a society where neither is allowed to exist naturally and freely.

Hurston uses two images from nature to symbolize Janie’s quest: the horizon and the blossoming pear tree. One, the horizon, suggests that the search is an individual quest; the other, the pear tree in blossom, suggests a fulfillment in union with another. Janie describes her journey to find herself in a language that takes us deep into black folk traditions.”

“Whatever its personal matrix, Hurston’s novel is much more than an outpouring of private feeling. It is both her most accomplished work of art and the authentic, fictional representation of Eatonville [the small, independent, all-Black Florida town where she grew up] she had been struggling for in Jonah’s Gourd Vine.

The novel culminates the fifteen-year effort to celebrate her birthright, a celebration which came through the exploration of a woman’s consciousness, accompanied by an assertion of that woman’s right to selfhood.”

Always somewhat controversial, it’s fascinating to discover what reviewers thought of Their Eyes Were Watching God when it first came out. Here are two enthusiastic reviews, one from an Illinois newspaper, and one from Australia, from the year in which this classic was published.

Though Their Eyes Were Watching God received many favorable reviews, some critics objected to it. As with some of her previous books, some reviewers were put off by the dialect, but even more so, by the lack of bitterness in Zora’s work. Social protest novels, or “race novels” were expected of Black authors, and Zora would have none of it.

Richard Wright, it seemed, was offended: “Her characters eat and laugh and cry and work and kill; they swing like the pendulum eternally in that safe and narrow orbit in which America likes to see the Negro live: between laughter and tears.”

According to Robert E. Hemenway’s literary biography of Zora, the eminent public intellectual Alain Locke dismissed the book as “folklore,” albeit “folklore fiction at its best.” This characterization enraged Zora, who, in a response, attacked Locke in no uncertain terms.

Zora’s outburst notwithstanding, literary history has vindicated her, and Their Eyes Were Watching God has a secure place as a twentieth century class.

A 1937 American review of Their Eyes Were Watching God

From the Freeport Journal-Standard (Freeport, Illinois),  Oct 6, 1937: Their Eyes Were Watching God is the third and finest of Zora Neale Hurston’s penetrating novels of her own people.With intelligence and compassion, Miss Hurston tells the story of Janie, and of the three men she loved and lived with.

She married Logan Killicks, the prosperous farmer, because her grandmother desired it When love did not come to her with time, as her granny had said it would, she left him for Joe Starks.

When she and Joe first met, he had nothing. But chance sent them to Eatonville, and there his ambition and lust for power made him mayor of the town.

As his power increased, his love for Janie and his kindness to her diminished. At last, his cruelty goaded her to madness and she killed him.

A long time passed, and then one day “Tea Cake,” young and debonair and swaggering, stepped into her store. What happened to Janie after that brought her the only real happiness she ever had.

Their Eyes Were Watching God is a moving story, told with humor and great understanding. Miss Hurston has a sense of the dramatic which lifts and speeds her novel. There is a tendency to write preciously and an intoxication with words, both of which tend to clutter a bit the simple story. On the other hand the there is skillful writing and really magnificently handled dialog.

This novel is certainly one or the season’s best, and adds weight to the conviction that one of these days Miss Hurston is going to produce the great black novel destined to come out of America.

A 1938 Australian review of Their Eyes Were Watching God

From The Sydney Morning Herald (New South Wales, Australia), June 3, 1938 :To the reader, weary of sophisticated mannerisms, cynicism, and that blasé attitude towards life which is so often part and parcel of the moderns, Zora Neale Hurston‘s novel should conic as a stimulating tonic of no uncertain quality.

There is a zest and emotional sincerity here which is distinctly bracing; there’s too, a remarkable grasp of the essentials of the craft of novel-writing which might well be observed and emulated by her white brethren. The action is swift, the dialogue is brisk and carefully balanced by short, colorful, descriptive passages.

The theme of the book is a black girl’s search for fulfillment. Janie, orphaned in childhood, was brought up by her grandmother. This old woman, fearing that her charge might share the fate of her forbears, decides that a. safe marriage must be sought as soon as possible. Janie, glad to escape the eagle eye, consents to marry dull, hard-working Logan Killicks.

With a coffee-and-cream complexion and luxuriant hair, it is not long before other men try to attract her attention. Bored by her husband, she succumbs to the boastings and entreaties of Joe Sparks—a Negro with high ideas of his own ability and importance. It transpires that Joe’s estimate of himself is not without foundation. He and Janie go south to Eatonville, an exclusively Negro town.

Here he is elected Mayor. He grows gradually more and more egotistical and jealous of Janie. She grows correspondingly lonely and discontented. When he became too overbearing, she turned on him and stripped him of his pride—he died cursing her. Her next adventure was completely satisfying.

Tea Cake, a delightful young scapegrace, wooed her, and they took the road together. abandoning the pomposities of Eatonville. Down in Florida they planted beans, living and working side by side in utmost content.

Picturesqueness of thought and expression is an outstanding feature of this novel. The Negro view of life and death, far removed from our own, cannot fail to appeal to the imaginative reader.  The climax of the story is handled with skill and force. In the last chapters, Miss Hurston has proved she is a fine artist as well as a competent craftsman.

More about Their Eyes Were Watching God