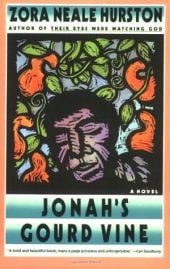 Jonah’s Gourd Vine was the first novel by  Zora Neale Hurston (1891 – 1960), published in 1934. The central character is John Buddy Pearson, a Black plantation worker who aspires to be a preacher. Once he achieves his goal, he gives powerful sermons on Sundays, and the rest of the week indulges in extramarital dallying with the women of his congregation.

While studying with the noted anthropologist Franz Boas, Zora was recognized for her talent for storytelling and abiding interest in black cultures of the American South and Caribbean.

Her background as an anthropologist and folklorist was one of her great gifts, and what made her work, both fiction and nonfiction, so unique. She was already established in the field when this novel came out, as well as having published a number of short stories and nonfiction works.

After decades out of print, HarperCollins reissued Jonah’s Gourd Vine in 2008. From the publisher’s description:

“Jonah’s Gourd Vine tells the story of John Buddy Pearson, ‘a living exultation’ of a young man who loves too many women for his own good. Lucy Potts, his long-suffering wife, is his true love, but there’s also Mehaley and Big ‘Oman, as well as the scheming Hattie, who conjures hoodoo spells to ensure his attentions.

Even after becoming the popular pastor of Zion Hope, where his sermons and prayers for cleansing rouse the congregation’s fervor, John has to confess that though he is a preacher on Sundays, he is a ‘natchel man’ the rest of the week.

And so in this sympathetic portrait of a man and his community, Zora Neale Hurston shows that faith, tolerance, and good intentions cannot resolve the tension between the spiritual and the physical. That she makes this age-old dilemma come so alive is a tribute to her understanding of the vagaries of human nature.”

Zora describes her intent for Jonah’s Gourd Vine, which is possibly based on her own parents’ dysfunctional marriage. The novel provides an unflinching view of Reconstruction-era African-American life, with black families adjusting to freedom and migration.

Aspiring to better himself through education and religion, yet unable (and unwilling) to master his philandering ways, John Buddy Pearson’s divided nature leads to his inevitable downfall. In Zora’s own words:

“While I was in the research field in 1929, the idea of Jonah’s Gourd Vine came to me. I had written a few short stories, but the idea of attempting a book seems so big, that I gazed at it in the quiet of the night, but hid it away from even myself in daylight.

For one thing, it seemed off-key. What I wanted to tell was a story about a man, and from what I had read and heard, Negroes were supposed to write about the Race Problem. I was and am thoroughly sick of the subject. My interest lies in what makes a man or a woman do such and so, regardless of his color.” 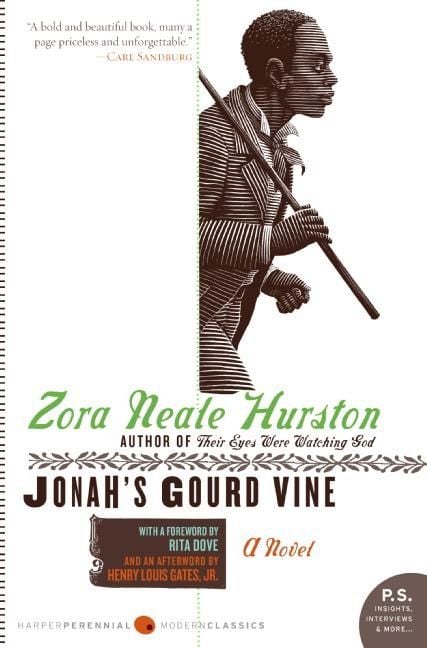 “Just a word about my novel … I have tried to present a Negro preacher who is neither funny nor an imitation Puritan ram-rod in pants. Just the human being and poet that he must be to succeed in a Negro pulpit. I do not speak of those among us who have been tampered with and consequently have gone Presbyterian or Episcopal.

I mean the common run of us who love magnificence, beauty, poetry, and color so much that there can never be too much of it. Who do not feel that the ridiculous has been achieved when someone decorates a decoration. That is my viewpoint. I see a preacher as a man outside of his pulpit and so far as I am concerned he should be free to follow his bent as other men. He becomes the voice of the spirit when he ascends the rostrum.”

“Jonah’s Gourd Vine is an autobiographical novel … It is usually dealt with as a fictionalization of her parents’ marriage — complete with her father’s philandering, her mother’s steady strength, and Zora’s reaction to them both.

The novel’s main characters are John and Lucy; their history is the Hurston family history. The plot takes John from life on an Alabama plantation to a ministerial position in Eatonville.

Zora even uses the deathbed scene that she remembered as a major trauma of her youth, when her dying mother asked her to stop the neighbors from removing her pillow at the moment of passing.

… Often the novel portrays John and Lucy in ways that Zora apparently never thought of her parents, and the novel’s plot does not follow exactly the family story. For example, there is more than a hint that Lucy’s death is caused by the workings of a hoodoo doctor, an idea with dramatic potential but no basis in fact.

The novel is basically John’s story. He rises from life as an illiterate laborer to become moderator of a Baptist convention in central Florida. The seeds of his tragedy are sown early: he cannot resist women, and although he is a powerful man of God when in the pulpit, he is a man among women when his inspiration ends.

Lucy, who is in many ways the strongest character in the novel, serving as both a mainstay for John and a cohesive force for her family, all but wills him the backbone necessary to rise in the world. But after she dies, his lusts predominate.

Eventually his congregation rejects him, and he dies just as he has begun to understand both his success and his failure.”

Here is George S. Schuyler‘s original review in The Pittsburgh Courier, one of the prominent Black newspapers of the twentieth century  (May 12, 1934):

Jonah’s Gourd Vine by Zora Neale Hurston is a first class novel by a brilliant young woman. Like Elmer Gantry, it tells of the rise of a man of god, only John Pearson is a big, strong, magnetic mulatto* [note from Literary Ladies: this term is no longer used, it was a common term to describe a mixed-race person in the time this review was written].

Like Elmer Gantry, however, John cannot keep away from the sisters, and of course, that is his undoing. If this were all, Jonah’s Gourd Vine would still be a fine novel, because Zora Hurston knows all about our reverend clergy.

But this novel is a mine of folklore; a study of social life in the rural south, which the author knows so well. Julia Peterkin, Du Bose Heyward, and Roark Bradford have written about the Black rustic but they have all described him with the cool objectivity of an outsider. Miss Hurston writes of her folk with the knowledge and warmth of understanding that comes only with the intimate spiritual association.

She knows her people and loves them, but she is not blind to their faults, their fads, or their foibles. She knows their weakness and their strength.

Her ear for Southern country dialect is superb and in setting it down she excels any Dixie writer of today … I confess that I read Jonah’s Gourd Vine with progressively increased interest and rapidly mounting enthusiasm. It is smoothly written, a finished piece of work, valuable alike as literature and sociology. When I laid it down, I voted it one of the best novels ever written about the Southern Negro farmers.

The achievement of Jonah’s Gourd Vine

In his introduction to the 1971 edition, Larry Neal summed up the book’s legacy:

“The central achievement of Jonah’s Gourd Vine is Zora Neale Hurston’s success in penetrating the “romantic” surface of rural black Southern life. This achievement is notable despite her tendency to overwork her dialect; that is, to render it with such phonetic faithfulness that some of the real poetry embodied in black speech is either obscured of goes unexploited.

She is at her best in her narrative, or when she allows her own voice to seep into the beautiful sermonistic passages in this novel. In these instances, she really illustrates the scope of her vision, and consequently challenges not only her Harlem contemporaries, but much of the literature of her time.”