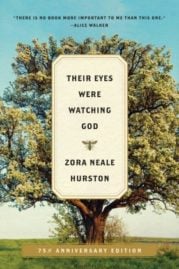 Zora Neale Hurston (1891 – 1960), the African-American author and anthropologist, was a natural storyteller. Presented here is a survey of books by Zora Neale Hurston’s — fiction,  ethnographical collections, and other writings.

Her love of story resulted in an array of novels and short stories as well as collections gathered from the oral traditions of the Black cultures of the American South and the Caribbean.

Zora made a name for herself during the Harlem Renaissance movement of the 1920s, when she began producing novels, short stories, plays, essays, and a modest output of poetry. Upon graduating from Barnard College in 1928, she embarked on a parallel career as an anthropologist.

Though her literary works sold fairly well and gained many admirers, they had their share of detractors. Some Black writers objected to her use of dialect. Other contemporaries were troubled by her political conservatism.

Today, it may be surprising to learn that in the course of her lifetime, Zora’s reputation began to decline. By the time she died in 1960, forgotten and alone, most of her works were out of print. Fortunately for contemporary readers, that situation has been remedied. Her work is now back in print, readily available, and widely studied. 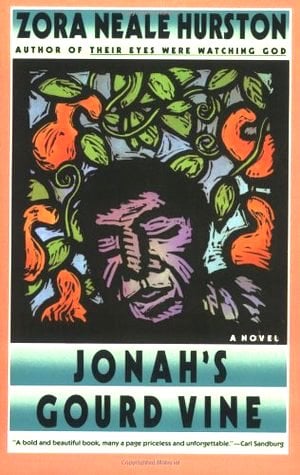 Jonah’s Gourd Vine was Zora’s first novel, published in 1934. It’s the story of a Black plantation worker, John Buddy Pearson, who aspires to be a preacher. Once he achieves his goal, he devotes Sundays to giving powerful sermons, and the rest of the week, he indulges in extramarital dallying with the women of his congregation. According to the publisher of the edition reissued in 2008:

“In this sympathetic portrait of a man and his community, Zora Neale Hurston shows that faith, tolerance, and good intentions cannot resolve the tension between the spiritual and the physical. That she makes this age-old dilemma come so alive is a tribute to her understanding of the vagaries of human nature.” 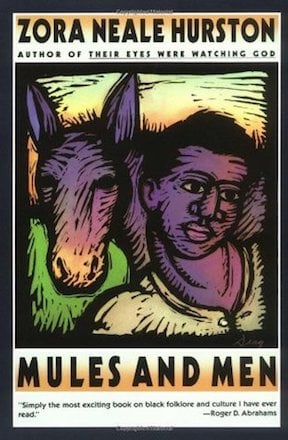 Mules and Men   is an ethnographical collection of stories in the oral tradition that Zora collected on two trips — one in Florida, including Eatonville (the town in which she was raised) and Polk County, and the other in New Orleans. In Florida, she documented some seventy folktales, while in New Orleans, she documented voodoo traditions and other stories. In The Journal of American Folklore (summer, 1996), Susan Meisenhelder wrote of this book:

“While Mules and Men seems (and was, in fact, read by most of her contemporary reviewers as) a straightforward depiction of the humor and “exoticism” of African American folk culture, Zora Neale Hurston carefully arranged her folktales and meticulously delineated the contexts in which they were narrated to reveal complex relationships between race and gender in Black life.”

Their Eyes Were Watching God   Zora’s third published book and second novel is her best-known work, and has become something of a feminist classic. Janie, the story’s heroine, searches for independence, identity, love, and happiness over the course of twenty-five years and several relationships. This story is not unlike Zora’s own, though it could be argued that she never found true happiness.

Though always somewhat controversial, the book was generally well-received upon initial publication. A 1937 review stated:

“Their Eyes Were Watching God is a moving story, told with humor and great understanding. Miss Hurston has a sense of the dramatic which lifts and speeds her novel. There is a tendency to write preciously and with an intoxication with words, both of which tend to clutter a bit the simple story. On the other hand there is skillful writing and really magnificently handled dialog.” 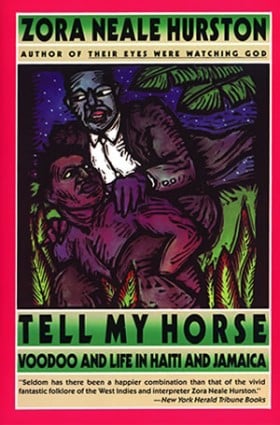 Tell My Horse: Voodoo and Life in Haiti and Jamaica (1938) is based on Zora’s firsthand research of Voodoo practices in Haiti and Jamaica. In 1936, Zora received a Guggenheim fellowship, which allowed her to delve even more deeply into her research. She traveled to Jamaica and Haiti to collect stories and collecting material on African rituals and voodoo. Her research resulted in two nonfiction collections about the culture and language of the people she researched — Mules and Men (1935), and this one.

For these collections, Zora traveled to Jamaica and Haiti. While in the two island nations in the late thirties, Zora participated as an initiate, not just an observer. Tell My Horse peers into the mysteries of Voodoo and paints a unique portrait of its rituals, beliefs, ceremonies, customs, and superstitions. 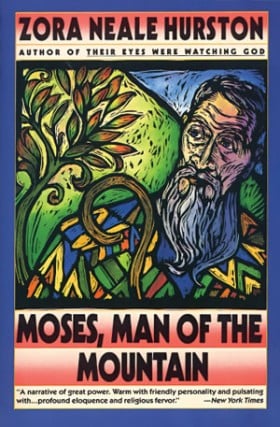 Moses, Man of the Mountain  demonstrates Zora’s strength as a writer through character development and use of narration. This novel tells the story of Moses and the Book of Exodus from an African-American perspective. The Zora Neale Hurston Digital archive describes the book:

“Moses, Man of the Mountain is Zora Neale Hurston’s attempt at re-writing (or re-righting) the Bible from an Afro-American perspective. She retells the story of the Exodus, which is the triumphant tale of Moses and the Israelites’ escape from Egyptian slavery.” 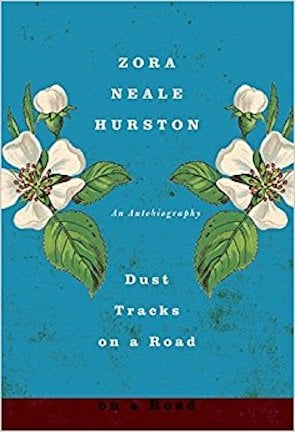 Dust Tracks on a Road, Zora’s 1942 autobiography, has confounded readers and scholars since its publication. Some critics have even argued that this book might have damaged her reputation. Is it a true memoir or partially apocryphal? Was the story of her life, as she told it, impressionistic rather than realistic? In her foreword to the 2006 edition, Maya Angelou wrote:

“Zora Neale Hurston chose to write her own version of life in Dust Tracks on a Road. Through her imagery one soon learns that the author was born to roam, to listen, and to tell a variety of stories …

In this autobiography, Hurston describes herself as obstinate, intelligent, and pugnacious. the story she tells of her life could never have been told believably by a non-Black American, and the details even in her own hands and words offer enough confusions, contusions, and contradictions to confound even the most sympathetic researcher.” 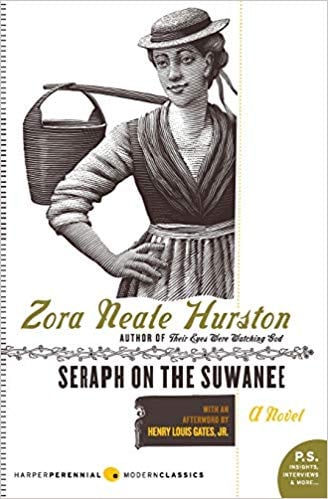 Seraph on the Suwanee, Zora’s last full-length work of fiction, featuring white main characters — a departure for her. It has not been well received by African-American critics. From the publisher of the 2008 edition:

“Alive with the same passion and understanding of the human heart that made Their Eyes Were Watching God a classic, Hurston’s Seraph on the Suwanee masterfully explores the evolution of a marriage and the conflicting desires of an unforgettable young woman in search of herself and her place in the world.

Hurston explores new territory with her novel Seraph on the Suwanee, a story of two people at once deeply in love and deeply at odds, set among the community of ‘Florida Crackers’ at the turn of the twentieth century. Full of insights into the nature of love, attraction, faith, and loyalty.” 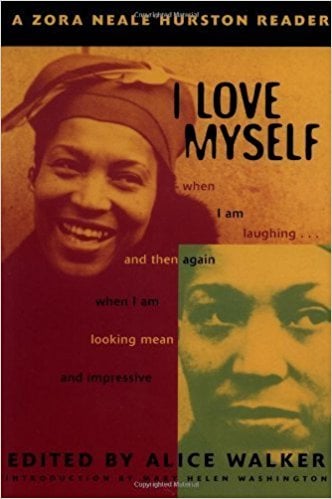 I Love Myself: When I am Laughing … and Then Again When I am Looking Mean and Impressive is an anthology of Zora Neale Hurston‘s work, including essays as well as portions of her novels and memoirs. This collection demonstrates how fortunate it is for new generations of readers that Alice Walker (who served as its editor) revived Zora’s work and reputation.

It pays tribute to Hurston’s role in black literature of the early twentieth century, including famous essays like “How it Feels to Be Colored Me” and “Crazy for This Democracy;” full short stories like “The Gilded Six-Bits;” and portions from her autobiography Dust Tracks on a Road, as well as her ethnographic studies, notably Tell My Horse. This collection is a nice introduction for those just starting to gain an appreciation of Zora Neale Hurston. 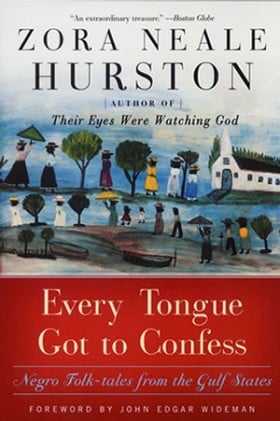 Every Tongue Got to Confess  collects a selection of Zora’s ethnographic writings. According to the publisher of this 2001 publication:

“These hilarious, bittersweet, often saucy folk-tales — some of which date back to the Civil War — provide a fascinating, verdant slice of African-American Life in the rural South at the turn of the twentieth century. Arranged according to subject — from God Tales, Preacher Tales, and Devil Tales to Heaven Tales — they reveal attitudes about slavery, faith, race relations, family, and romance that have been passed on for generations. They capture the heart and soul of the vital, independent, and creative community that so inspired Zora Neale Hurston.” 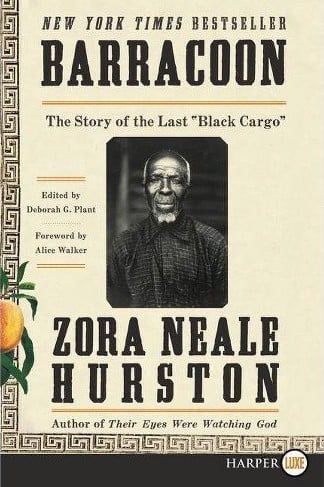 Barracoon: The Story of the Last “Black Cargo” caused quite a bit of literary excitement when it was published for the very first time in 2018. From the publisher: “In 1927, Zora Neale Hurston traveled to Plateau, Alabama, to visit eighty-six-year-old Cudjo Lewis, a survivor of the Clotilda the last slaver known to have made the transatlantic journey. Illegally brought to the United States, Cudjo was enslaved fifty years after the slave trade was outlawed.

Barracoon employs Hurston’s skills as both an anthropologist and a writer, and brings to life Cudjo’s singular voice, in his vernacular, in a poignant, powerful tribute to the disremembered and the unaccounted. This profound work is an invaluable contribution to our history and culture.”

Hitting a Straight Lick With a Crooked Stick (2020) 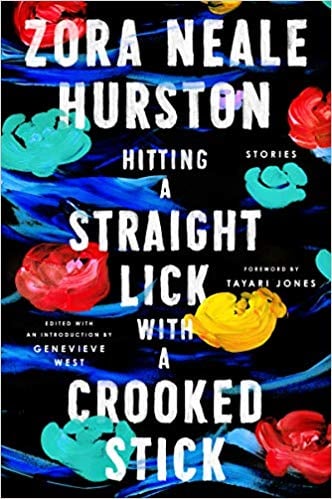 Hitting a Straight Lick With a Crooked Stick, a newly discovered collection of Zora’s works, will surely be as much cause for excitement as was the discovery of Barracoon. From the publisher:

“Hitting a Straight Lick with a Crooked Stick is an outstanding collection of stories about love and migration, gender and class, racism and sexism that proudly reflect African American folk culture. Brought together for the first time in one volume, they include eight of Hurston’s ‘lost’ Harlem stories, which were found in forgotten periodicals and archives.

These stories challenge conceptions of Hurston as an author of rural fiction and include gems that flash with her biting, satiric humor, as well as more serious tales reflective of the cultural currents of Hurston’s world. All are timeless classics that enrich our understanding and appreciation of this exceptional writer’s voice and her contributions to America’s literary traditions.”

Some of Zora’s short stories have become well known and are still read and studied. They were collected in The Complete Stories in 2008. A few that are covered here on Literary Ladies: