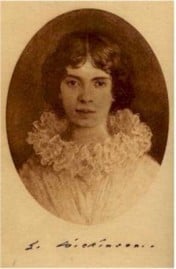 Emily Dickinson (1830-1886) lived in Amherst, Massachusetts where she studied at Amherst Academy with her siblings and wrote 1,800 poems over the course of her lifetime. Here we’ll enjoy a selection of poetic quotes by Emily Dickinson, most being beautiful isolated lines from her poems.

It was during the Civil War years that Emily developed her identity as a poet. She sent some of her poems to Thomas Wentworth Higginson, a noted literary figure.

His critique of her unorthodox style seemed to discourage her, and she retreated to the habit of keeping her writing private. Nevertheless, she continued to write copiously.

In The Penguin Companion to American Literature (1971), Eric Mottram offered this assessment of her poetic practices:

… ‘Pardon my sanity in a world insane,’ she wrote in a letter, a clue to her need to create a balanced life out of her passion and intellectual clarity.

In 1863 she probably wrote about 140 poems, and in 1864 nearly 200, the high point of her prolific output of about 1,775 poems, all written within the characteristic late 19th-century range of relationships between God, man, and nature. Since she did not have the pressures of publication, her style is remarkably free, intense, and idiosyncratic, the exact form of her complex personality.

Her weakness is a reliance on rhythmic cadences and meters from hymns and popular jingles. She was not a prosodic innovator, although her punctuation, derived from reading and pronunciation handbooks, looks odd.

And her imagery continually startles with its freshness and penetration. Her modernity is her articulation of psychological experience and skeptical desire for faith.” 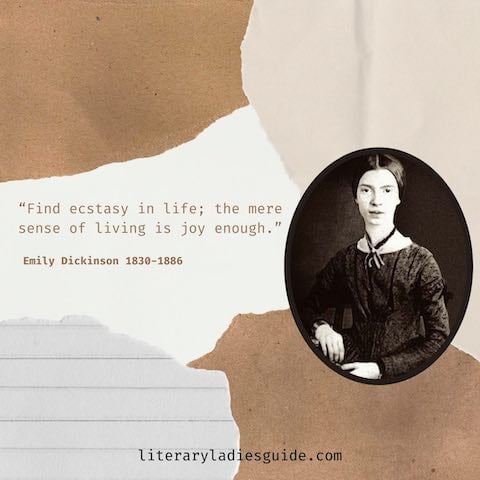 “Find ecstasy in life; the mere sense of living is joy enough.”

“Forever is composed of nows.”

“’Hope’ is the thing with feathers –
That perches in the soul – “

“A wounded deer leaps the highest.”

“A word is dead when it’s been said, some say. I say it just begins to live that day.” 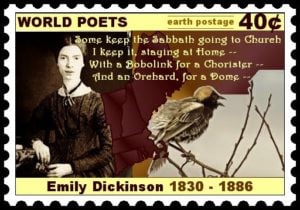 “PHOSPHORESCENCE. Now there’s a word to lift your hat to … to find that phosphorescence, that light within, that’s the genius behind poetry.”

“But a book is only the heart’s portrait —  every page a pulse.”

“That it will never come again is what makes life so sweet.”

“Morning without you is a dwindled dawn.”

“Unable are the loved to die, for love is immortality.”

“Whenever a thing is done for the first time, it releases a little demon.”

“Not knowing when the dawn will come I open every door.”