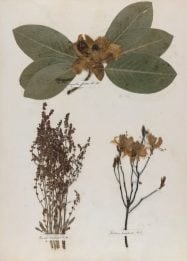 Emily Dickinson’s herbarium serves as a time capsule into the poet’s mysterious life. It reflects her poetic connection to nature, and her sensitivity to life and mortality, echoing the enigmatic nature of the poet herself.

Emily lived a quiet life in her hometown of Amherst, Massachusetts, where she was born in 1830. She was a gardener before she was a poet, having studied botany beginning at the age of nine. She also enjoyed working alongside her mother in the garden.

Collecting and pressing flowers was a common hobby for young girls of her time. Emily began her assemblage of flowers while attending Amherst Academy in 1844, and took her passion to new levels, often including pressed flowers in letters she sent. 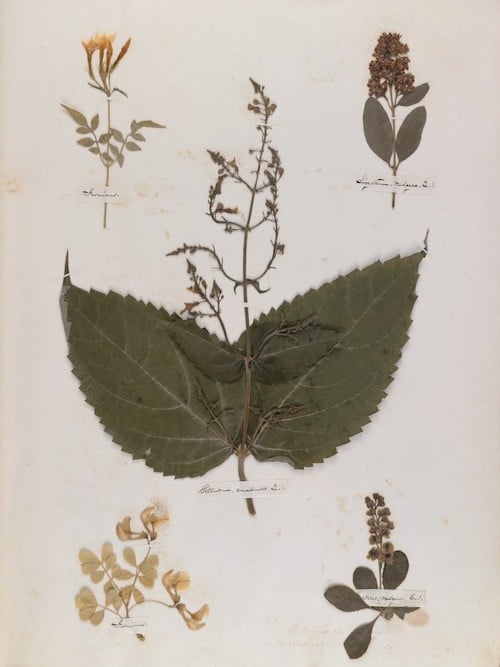 She was a serious student of science, particularly botany, during her only year at Mount Holyoke Female Seminary. At a time when the sciences were male-dominated, Emily pushed herself to gain as much knowledge as possible.

At age fourteen, Emily began a collection of over four hundred specimens of dried flowers. In a letter from 1845, she asked her friend Abiah Root if she had started collecting flowers and plants for a herbarium: “it would be such a treasure to you; ‘most all the girls are making one.” Neatly pressed onto sixty-six pages in a leather-bound album, she meticulously and delicately arranged and positioned them, almost as if to appear that they were still alive. 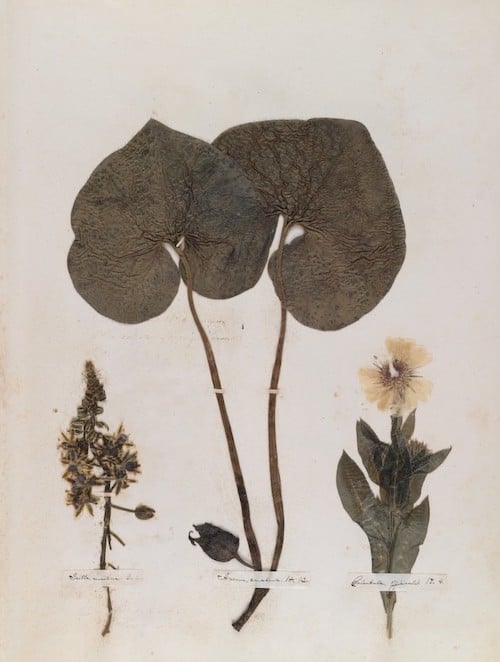 Emily had a habit of juxtaposing botanical samples that wouldn’t often appear together in nature. For example, on the first page of the album, she combined jasmine and pivot, arranging them in the center of the page in such a way that made them look like one plant.

Whether this odd combination was merely for aesthetic purposes or some other intent is beyond our knowledge. Leslie A. Morris, curator of modern books and manuscripts at Harvard University’s Houghton Library, speculates that these arrangements may have been poetic. 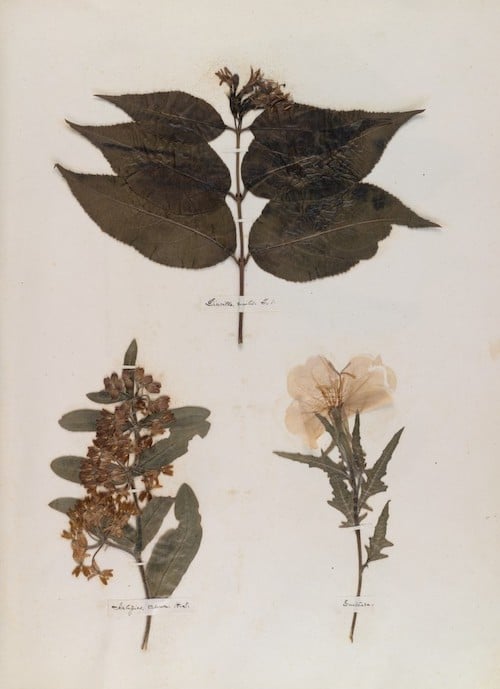 “I think you could read a lot into the herbarium if you wanted to. Jasmine has as one of its nicknames ‘poet’s jessamine’; it can also mean ‘passion’ in the language of flowers. Did she choose that specimen because it represented poetry to her? You have jasmine for poetry and passion, and privet for privacy – and Dickinson became a recluse later in life.”

We can never truly know Emily’s intentions, or if they existed at all. However, that doesn’t mean the herbarium isn’t significant. 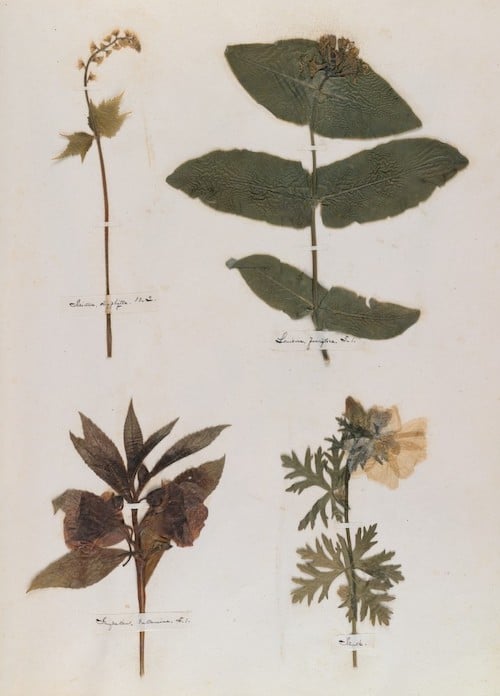 Emily had a penchant for weaving botanical elements into her writings, informing her passion for poetry with her passion for nature. Poems such as Fame is a Bee , With a Flower, and Nobody Knows this Little Rose include elements of her affinity with the natural world.

Emily Dickinson’s herbarium is extensive, detailed, and sensitively organized. The original Herbarium now lives at Harvard’s Houghton Rare Book Library. It’s so delicate that touching it is prohibited. However, the library has made high-quality online scans of the book that are free to access. 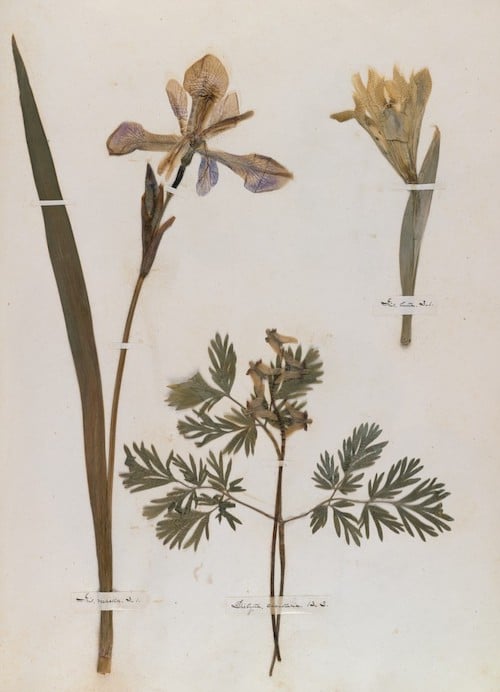 In addition, Harvard University Press published a complete facsimile of the Herbarium in 2006:

“Dickinson devotees can finally examine what lies inside with a full-size, full-color reproduction of the album published as “Emily Dickinson’s Herbarium: A Facsimile Edition” (The Belknap Press of Harvard University Press). 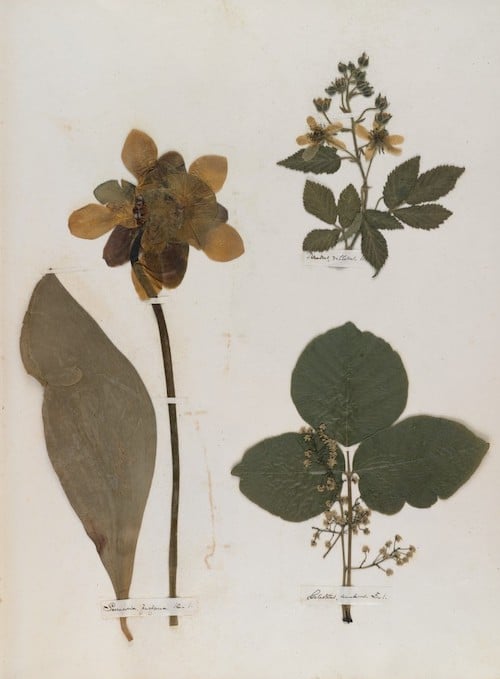 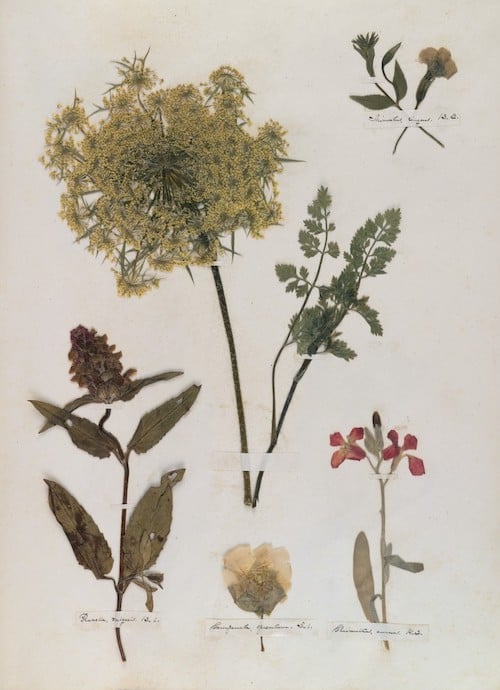 Jess Mendes is 2021 graduate of SUNY-New Paltz with a major in Digital Media Management, and a minor in Creative Writing.