Isak Dinesen, Author of Out of Africa 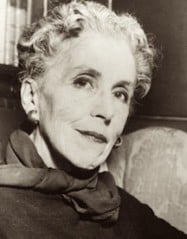 She’s also considered a master of short-form fiction.  One of her best known collections is Seven Gothic Tales, and a standout short story (turned film) is “Babette’s Feast” (1958).

Though admired as a master storyteller, contemporary reconsiderations of her work shed light on the inherent racism in her portrayals of the Africans she lived amongst during the colonial period. This issue will be discussed later in this brief biography. A complex personality, Dinesen’s place in modern literature continues to be debated.

Baroness Karen von Blixen-Finecke, born Karen Christenze Dinesen, was born into a family of aristocrats, merchants, and landed gentry. Her father was a peripatetic traveler, military man, politician, and writer who committed suicide when Karen was just nine or ten years old. Her mother was left to raise their five children alone.

Karen showed an early interest in writing, creating stories, plays, and poetry. Her stories, which she began to write down at age eight, helped allay some of the unhappiness of her childhood. They were also read for the amusement of her sisters.

In 1903 she began studying art in Copenhagen, first at a school of design, and later at the Danish Royal Academy of Art. Though she didn’t pursue art as a career, she felt this training was valuable to her in learning to observe deeply.

She later wrote that “painting has constantly revealed the true nature of the world to me. I have always had difficulty in seeing what a landscape really looks like unless I have been given a key to it by a great painter.”

Marriage, a coffee plantation, and a love affair

Karen became engaged to Baron Bror Blixen-Finecke, a second cousin, and they married in 1914. They moved to Mombassa, British East Africa, which would become Kenya in 1920. Together, they started a coffee plantation. Not long after, she discovered that she had contracted syphilis from her husband, which would continue to be a chronic condition for much of her life.

She returned to Europe briefly in 1915 to be treated, then returned to Africa. She and her husband bought a larger farm not far from Nairobi. The marriage was troubled from the start, and the couple divorced in 1921.

Karen stayed on and ran the coffee farm by herself, which was considered unusual for a woman of her time. For all the difficulty she experienced in running this enterprise alone, she also found it liberating. She reflected on this time:

“Here at long last one was in a position not to give a damn for all the conventions, here was a new kind of freedom which until then one had only found in dreams.”

Her position gave her not only freedom, but status in the colonial society. And here is where she is faulted, for her freedom came at the expense of Africans and was experienced through her privilege.

It was in this period that Karen fell in love with Denys Finch Hatton, a British aristocrat, big game hunter, and later, an aviator. Their turbulent affair has been immortalized in the 1985 film, Out of Africa, starring an accurately accented Meryl Streep, with Robert Redford miscast as Finch Hatton. 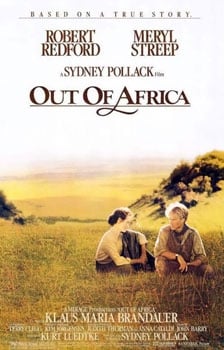 A return to Denmark, and the work of a storyteller

Karen continued her on-again, off-again affair with Finch Hatton until his death in a plane crash in 1929. It left her devastated. She stayed in Africa until 1931, running the farm on her own, despite financial difficulties and droughts. When the farm’s fortunes collapsed in 1931, she returned to her family home in Denmark.

Soon after returning to Denmark Karen began to use the nom de plume Isak Dinesen, though it was actually only a partial pen name; Dinesen was, after all, her original surname. In 1934, Seven Gothic Tales, a collection of stories she had written in English, was published. Of the stories, she said:

“Reality had met me … in such an ugly shape, that I have no wish to come into contact with it again. Somewhere in me a dark fear was still crouching and I took refuge within the fantastic like a distressed child in his book of fairy tales.”

Seven Gothic Tales became a surprising success in the U.S., even becoming a Book-of-the-Month-Club selection. It set the stage for the thematic character of her fiction, which was an amalgam of the real and the mythic, and incorporating elements of Persian and West Indian exotica.

Storytelling is actually a part of some of her stories, that is, stories are told within the stories; and characters are sometimes archetypes rather than fully fleshed-out people. She wrote of her work:

“I belong to the ancient, idle, wild, and useless tribe, perhaps I am even one of the last members of it, who, for many thousands of years, in all countries and parts of the world,  has, now and again, stayed for a time among the hard working honest people in real life, and sometimes has thus been fortunate enough to create another sort of reality for them, which, in some way or another, has satisfied them. I am a storyteller.” 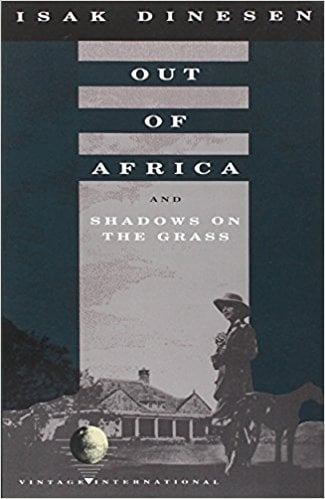 Out of Africa: A contemporary reconsideration

Dinesen’s seventeen years in Kenya, or what was then called British East Africa, became the basis of what remains her best-known work, the memoir Out of Africa (1937). It begins with the simple yet memorable line: “I had a farm in Africa, at the foot of the Ngong Hills.”

The memoir covered her years in Africa, from 1914 to 1931, centered around a four-thousand acre coffee plantation in the hills of Nairobi. When she and her husband separated, she stayed on to manage the farm herself.

During those years she was frequently visited by Finch Hatton. For his amusement, she would make up stories “like Scheherazade.” In Africa, “I learned how to tell tales,” she recalled many years later. “The natives have an ear still. I told stories constantly to them, all kinds.”

Several contemporary critics and scholars have charged that Out of Africa is an out-of-date work, almost an anathema in post-colonial times. The way Dinesen refers to “the natives” is seen as disrespectful, and often downright demeaning. A 2017 essay in Quartz Africa by Abdi Natif Dahir, “Celebrating Karen Blixen’s Out of Africa Shows Why White Savior Tropes Still Exist,” argues:

“Since the publication of Blixen’s book in 1937, she has remained an important—and lasting—fixture in the study of Kenya’s colonial history. Her image was also solidified globally by the 1985 Oscar award-winning movie adaptation …

Yet given the criticisms leveled against Blixen and her portrayal of the Africans who lived on her farm, it was shocking to hear her openly racist ideas and choice of words regurgitated without examination at the museum—by a Kenyan tour guide. Who, exactly, were the ‘natives’?

To read Out of Africa is to read a string of loosely-connected stories that are mostly unified by one theme: the inferiority of the African being. Throughout the book, Blixen uses animal imageries and nature references to illustrate her points about the ‘squatters’ who lived on her land.

The Kikuyu and Maasai communities are called ‘primitive,’ a ‘flock of sheep’ who are ‘on friendly terms with destiny’ and can barely plan for the future.””

“In light of postcolonial African nations seeking to forge an identity and literature of their own, Blixen’s views, and particularly her novels of Africa, came under increased scrutiny.  Kenyan novelist and critic Ngugi wa Thiong’o refers to Blixen in his essay ‘Literature and Society.’

He sees her as a racist author who tries to ‘define the colonized world for the European colonizer.’ He points to Blixen’s repeated use of animal imagery when describing Africans.

In her depiction of her servant Kamante, Ngugi sees Blixen’s comparison to the animal as extreme insult.  He details a passage comparing Kamante’s actions to, ‘a civilized dog, that has lived for a long time with people, will place a bone on the floor before you, as a present.'”

Much of contemporary knowledge of Out of Africa is filtered through the award-winning film starring Meryl Streep and Robert Redford, whose greatest focus is on Dinesen’s fraught love affair with Finch Hatton. One thing most critics and scholars agree upon is that Dinesen was a master storyteller, but her legacy is complicated. As her biography on Post Colonial Studies states,

“Karen Blixen remains a complex figure in the writing and history of colonial Africa. Author, storyteller, and early colonizer, she helped to define Africa and its people for the many Europeans who read her novels, chiefly Out of Africa and Shadows on the Grass.

Criticism of her work frequently shifts from admiration of her form to outrage at her portrayal of Africans. Karen Blixen’s complicated life and work continue to be studied, debated, and questioned in light of both the colonial society she inhabited and the modern reality of a postcolonial world.”

Later books: Winter’s Tales and others

Building on her reputation as Isak Dinesen, she produced a number of well-regarded books, continuing mainly with short-form fiction and memoir. These included Winter’s Tales (1942), Last Tales (1957), and Shadows on the Grass (1960). The latter is also a memoir of her years in Africa. Ehrengard,  a novella, was published posthumously in 1963.

Though generally well-received, Winter’s Tales had it fair share of mixed reviews. One American reviewer wrote:

“Isak Dinesen is mistress of a difficult literary trick, which is the combination of two styles of prose in one short story. She can, and does, produce a straightforward and literally intended account of a given event, and at the same time she can overlay this straight prose with a fantastic enamel that serves two purposes. The first of these is to give the impression that there is something deeper than ordinary about the story itself. The other is to obfuscate the reader. Apparently, readers like to be befuddled.”

Dinesen had a fondness and perhaps even felt a debt of gratitude to the American reading public. In a 1956 interview in The Paris Review, she related:

“When I came back from Africa I had lost all the money I had when I married, because the farm didn’t pay you know. I asked my brother to finance me for two years while I prepared Seven Gothic Tales and I told him that at the end of two years I’d be on my own.

When the manuscript was ready I went to England and one day at luncheon there was the Editor, Mr. Huntington, and I said ‘Please, I have a manuscript and I wish you’d look at it.’

Then I sent it to America and it was taken right away by Robert Haas who published it, and the general public took it and liked it, and they have always been faithful.” 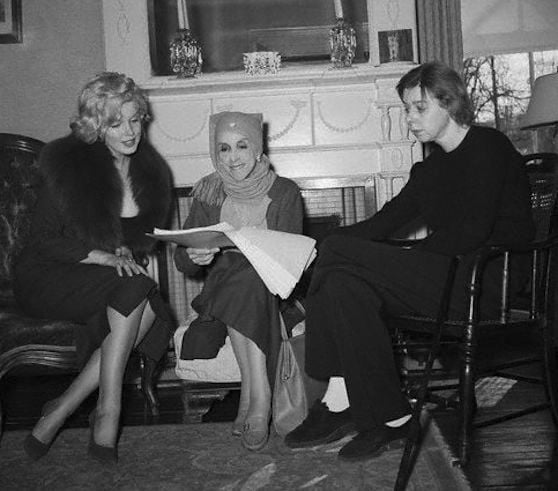 Isak Dinesen continued to suffer from the effect of syphilis into her later years. Her treatments had contained the illness, but never completely cured it.

Despite her frailty, she was able to enjoy a long visit to the United States in 1959. It was during this time that she met Carson McCullers, and the two authors had an extravagant lunch at McCuller’s home in Nyack, New York that also included Marilyn Monroe.

Stomach ulcers and anxiety also plagued the author throughout the years. When she died at age 77 in 1962 at Rungstedlund, her family estate, the cause was thought to be malnutrition.

Dinesen, aka Karen Blixen, produced many works, including unpublished plays, stories and poems that are in her archive at the Royal Danish Library. Here are some of the best known among her many works:

2 Responses to “Isak Dinesen, Author of Out of Africa”