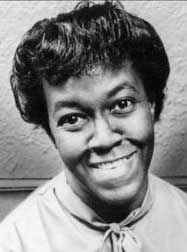 The author of this biography, Angela Jackson (herself a poet as well as a playwright and novelist) was granted unprecedented access to Brooks’s family and personal papers. She provides new perspectives on the first African-American ever to receive a Pulitzer prize.

The following excerpt from the biography describes how motherhood impacted Brooks’s career. When she was awarded the Pulitzer prize in 1950, she already had a young son, Hank, and about a year and a half later her daughter Nora was born.

Nineteen months after the Pulitzer announcement, Gwendolyn gave birth to a daughter, Nora, on September 8, 1951. Nora’s birth limited the poet’s ability to travel.

Gwendolyn was scheduled to participate in a literary festival at Jackson College in Mississippi in November 1952, along with Langston Hughes; Margaret Walker, who taught there; Owen Dodson of Howard University; Melvin Tolson; and Mary Elizabeth Vroman, whose novel See How They Run had been adapted into a Hollywood film.

Even though she was publicized, Gwendolyn was unable to attend the event because she could not find a babysitter for baby Nora. Nora says now that her mother limited her travel until she was eight or nine years old. Gwendolyn was a writing mother who seemed to have it all, but negotiating how and when was tricky, as her marriage was failing.

This is not to say she did not struggle between motherhood and writing. In December, 1951, when Hank was eleven and Nora a three-month-old infant, Gwendolyn confided in a letter to Langston Hughes that her duties and responsibilities as a mother were so overwhelming that she felt she was without time “to call my soul my own.” She barely had a moment for herself, much less to write. 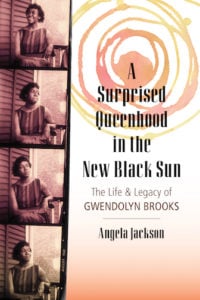 The mother as artist predicament

That is the story of most mothers who must care for their babies at home alone. And such is the predicament in which the artist who is a mother often finds herself.

But Gwendolyn persisted through the most difficult years when her children were most dependent on her. And she provides a model for women who would take on these demanding dual roles of poet/writer and mother.

Amid the work of a literary life and the struggles and joys of wifedom and motherhood, Gwendolyn grappled with her family’s housing situation. When she had received her prestigious award, they were living at 9134 South Wentworth Avenue, but the space was insufficient.

Her husband Henry’s partner at the auto shop had separated from his wife. So the Blakelys moved in with Henry’s partner, with the wife’s approval. That proved a gloomy business.

Hostility from other women

Gwendolyn met with hostility from women neighbors who did not understand her working at home; nor did they understand the intellectual and creative nature of her work. She was not a schoolteacher or nurse, factory worker or day worker or clerical worker.

She did not fit into their imaginations, if they had any. So they scorned her. One announced loud enough for Gwendolyn to overhear, “Like I say, if you worked for it, you could have it.”

That situation proved too much for Gwendolyn, so she and Hank (Gwendolyn and Henry had separated) moved into a rental property that the Blakelys owned in Kalamazoo, Michigan. But Gwendolyn hated the environment of people who appeared to her to be unimaginative, materialistic, “thing-minded.”

She missed the big city and its vibrancy and vitality, with so much to do and so many people to experience. So back to the city the family went.

This excerpt by Angela Jackson is from A Surprised Queenhood in the New Black Sun: The Life & Legacy of Gwendolyn Brooks (Beacon Press, 2017). Reprinted with permission from Beacon Press.

About the author: Angela Jackson is an award-winning poet, playwright, and novelist. She is the author of numerous collections of poetry, including the National Book Award-nominated And All These Roads be Luminous: Poems Selected and New.

Her novel Where I Must Go won the American book award in 2009. Roads, Where There Are No Roads was published in 2017. Jackson lives in Chicago.