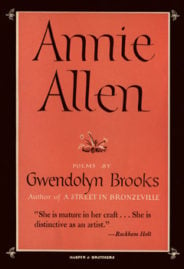 Annie Allen is a 1949 collection of poems by Gwendolyn Brooks. It won the Pulitzer Prize in 1950, making her the first African-American to receive this award.

The poems don’t flinch from the violence and racism that are part of Annie’s milieu, and end with her hopes for a better world than the one she has inhabited.

Central to this book, in addition to individual poems, is a 43-stanza epic poem, “The Anniad” (a reference to the epic poem “The Aeneid” by Virgil, the ancient Roman poet) follows the life of Annie, an African-American girl, from birth to womanhood, as she seeks self-awareness and fulfillment.

An analysis of Annie Allen

An excellent analysis in The New Republic, The Importance of Being Ordinary, begins:

“… Brooks details the social conditions that ensure Annie’s dreams remain unrealized, that force her to mature early, and ultimately leave her disillusioned.

‘The Anniad’ takes place against the backdrop of World War II. While almost all Americans benefitted from the post-war boom — both economically and socially — African-Americans failed to reap the full benefits of a country still fraught with racial tensions.

Annie Allen suffers the effects of the war: Her husband returns with post-traumatic stress disorder and a depressing awareness of the “white and greater chess” of America. He eventually abandons Annie, who is left “derelict and dim and done.” 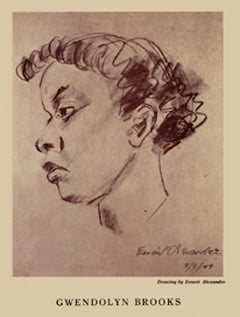 Sketch of Gwendolyn Brooks from the interior of Annie Allen (1949)

Surprisingly (and unfortunately), Annie Allen  isn’t easy to find in print despite its significance as a poetic work. Here’s an original review in the Pittsburgh Courier, coincidentally by a namesake — Gwendolyn Miller — published on October 1, 1949:

New Book of Poetry is an Excellent Example of Rare Art

Poetry is ever popular with the reading public; so it is with justifiable pride that Gwendolyn Brooks’s Annie Allen (Harper and Brothers, New York) is recommended as an excellent example of rare poetic art.

The author’s forms of expression are characteristic of herself in that they are new and good. She combines the fundamental talents of painter, sculptor, and dramatist in her work.

Often poetry is only words prettily put together to affect a pleasing sound, a heroic effort, what to give the reader a feeling of buoyancy. Some of it is remembered; some isn’t.

But Annie Allen will be remembered, because it is a living poetry of a simple people who have no wealth or worldly goods but do have a definite distinction belonging onto themselves from birth to adolescence and maturity.

The author’s poems paint pictures for the reader’s receptive mind. And the strange part of it is the picture does not seem to be there at first; then, all of a sudden it hits you right between the eyes that these are as much portrait as poem. 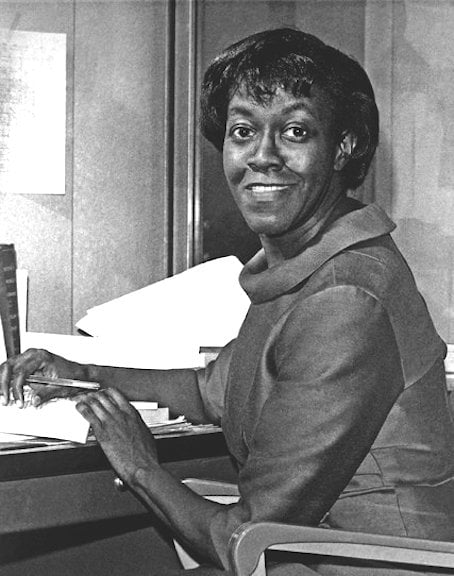 Miss Brooks’ “The Rites for Cousin Vit” is a gem, both provocative and plaintive in its vein. It seems next to impossible that everyday subjects could be composed in so compelling a way as to when the critics unbiased acclaim. Yet the author has used an unaffected choice of words to perfect her literary genius and add her name to the honor roll of great poets.

The temptation to fill a review with colorful excerpts is very strong, but it would not be fair to the reader, though it is doubtful that it would spoil his or her appreciation for this gentle writer’s art.

She has captured tears, hopes, desires, despairs, and faults of a people in ballad pathos that reaches and lies deeply indelible in the reader’s heart.

“The Anniad” is a forty-three stanza  masterpiece. Annie Allen as a whole stands out in front. (—Gwendolyn Miller for The Pittsburgh Courier, October 1, 1949

1
the birth in a narrow room

Now, weeks and years will go before she thinks
“How pinchy is my room! how can I breathe!
I am not anything and I have got
Not anything, or anything to do!” —
But prances nevertheless with gods and fairies
Blithely about the pump and then beneath
The elms and grapevines, then in darling endeavor
By privy foyer, where the screenings stand
And where the bugs buzz in private cars
Across old peach cans and old jelly jars.