“Why I Wrote the Yellow Wallpaper” by Charlotte Perkins Gilman 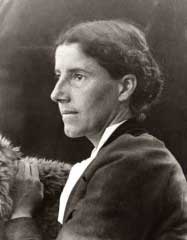 This article by Charlotte Perkins Gilman originally appeared in the October 1913 issue of The Forerunner. In it she answers the question posed by “many and many” a reader on why she wrote The Yellow Wallpaper. The 1892 long-form short story (or novella) became and remains a classic in feminist literature.

“Why I Wrote the Yellow Wallpaper” deals directly with the postpartum depression she suffered from, and her hopes that the story would enlighten other women who had similar experiences.

In Sarah Wyman’s analysis of The Yellow Wallpaper, she writes of the story’s narrator that “we can see the prison-like room she inhabits (with barred windows, a gate on the stairs, rings in the walls, and a nailed-down bed) as symbolic of her situation as an upper-middle-class woman of a particular time and place (19th century America).

Living under patriarchal rule, she is discouraged from self-expression and productivity via work and writing.” Here’s what Charlotte Perkins Gilman had to say in this retrospective look at her most famous work.

In Charlotte Perkins Gilman’s own words

When the story first came out, in the New England Magazine about 1892, a Boston physician made protest in The Transcript. Such a story ought not to be written, he said; it was enough to drive anyone mad to read it.

Another physician, in Kansas I think, wrote to say that it was the best description of incipient insanity he had ever seen, and — begging my pardon — had I been there?

For many years I suffered from a severe and continuous nervous breakdown tending to melancholia — and beyond. During about the third year of this trouble I went, in devout faith and some faint stir of hope, to a noted specialist in nervous diseases, the best known in the country.

This wise man put me to bed and applied the rest cure, to which a still-good physique responded so promptly that he concluded there was nothing much the matter with me, and sent me home with solemn advice to “live as domestic a life as far as possible,” to “have but two hours’ intellectual life a day,” and “never to touch pen, brush, or pencil again” as long as I lived. This was in 1887.

I went home and obeyed those directions for some three months, and came so near the borderline of utter mental ruin that I could see over.

Then, using the remnants of intelligence that remained, and helped by a wise friend, I cast the noted specialist’s advice to the winds and went to work again–work, the normal life of every human being; work, in which is joy and growth and service, without which one is a pauper and a parasite — ultimately recovering some measure of power. 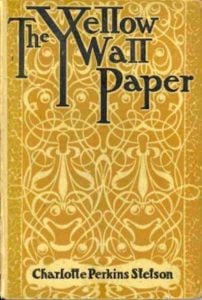 Being naturally moved to rejoicing by this narrow escape, I wrote The Yellow Wallpaper, with its embellishments and additions, to carry out the ideal (I never had hallucinations or objections to my mural decorations) and sent a copy to the physician who so nearly drove me mad. He never acknowledged it.

The little book is valued by alienists and as a good specimen of one kind of literature. It has, to my knowledge, saved one woman from a similar fate–so terrifying her family that they let her out into normal activity and she recovered.

But the best result is this. Many years later I was told that the great specialist had admitted to friends of his that he had altered his treatment of neurasthenia since reading The Yellow Wallpaper. It was not intended to drive people crazy, but to save people from being driven crazy, and it worked. 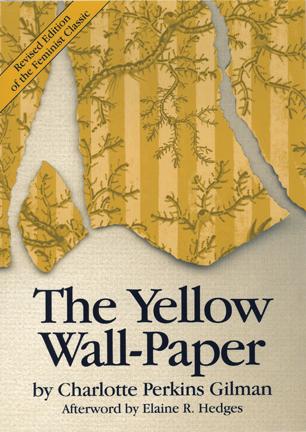 Quotes from The Yellow Wallpaper by Charlotte Perkins Gilman

“It is the same woman, I know, for she is always creeping, and most women do not creep by daylight.”

“It is the strangest yellow, that wallpaper! It makes me think of all the yellow things I ever saw-not beautiful ones like buttercups but old foul, bad yellow things.”

“The color is repellant, almost revolting; a smoldering unclean yellow, strangely faded by the slow-turning sunlight. It is a dull yet lurid orange in some places, a sickly sulphur tint in others. No wonder the children hated it! I should hate it myself if I had to live in this room long.”

“Nobody would believe what an effort it is to do what little I am able,—to dress and entertain, and order things.”

“I am, unfortunately, one of those much-berated New England women who have learned to think as well as feel; and to me, at least, marriage means more than a union of hearts and bodies — it must mean minds, too.”