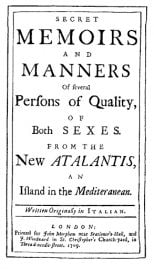 Many women authors have been criticized and even ostracized for their writing but very few have been arrested for it. The New Atalantis by Delarivier Manley (1709) was considered so scandalous that its publisher, printer and author were all arrested for scandalum magnatum.

This introduction to the best-known work by Delarivier Manley (1663 – 1724) is excerpted from Killing the Angel: Early Transgressive British Woman Writers by Francis Booth ©2021, reprinted by permission.

Manley herself considered that it was her gender that most upset the censors; in the follow-up book The Adventures of Rivella, 1714, she says, very much as Aphra Behn had said earlier:

‘If she had been a Man, she had been without Fault: But the Charter of that Sex being much more confined than ours, what is not a Crime in Men is scandalous and unpardonable in Woman.’

The New Atalantis was partly a thinly disguised autobiography but, like the earlier, equally scandalous Urania by Mary Wroth, was mainly a scalding, scathing attack on contemporary society, aimed at the corrupt courtiers, politicians and aristocrats of the time, transgressing any idea of the woman writer as only concerned with romance and manners.

Like Urania, New Atalantis is a kind of early roman à clef, where the names of real people are replaced by fictitious ones, which is why Lady Mary Wortley Montagu told her friend she believed she could find the Key. The central character is Astrea (you may remember that Astrea was Aphra Behn’s pseudonym; this was a deliberate homage on Manley’s part). She is a semi-divine woman who comes back down to earth and meets characters called Virtue and Intelligence, rather as Christine of Pizan met Reason, Rectitude and Justice.

‘Once upon a time, Astrea (who had long since abandoned this world, and flown to her native residence above) by a new formed design, and a revolution of thought, was willing to revisit the earth, to see if humankind was still as defective, as when she in a disgust forsook it.’

Astrea doesn’t like what she finds as she is guided round the world by her mother, Virtue. Between them, they rail at the corruption around them. Here they are discussing the corruption in the navy.

If some great good man should stand up and fearlessly regulate these disorders, as is reported there is now such a one at their head; if corruptions were not above, these inconveniences would not be below. Did only service and true merit recommend to office; were not bribery, and the solicitations of friends, preferred to duty and worth: were severe penalties inflicted upon these blasphemers (the commanders themselves first is a listing from the use): were dice, cards, and an exorbitant love of wine, and the hotter liquors taxed: were faithful commissioners appointed to inspect the provision of the Navy: were matter of lawful complaint made free to the meanest seamen, provided (upon pain of exemplary punishment) he advance nothing but the truth: were it made capital to take a bribe in the service of their country – the regulation might be made easy, if the leading men and commanders gave them but examples of sobriety, justice and morality. But all is nothing but oaths, drunkenness, burning lust, riots, avarice, cruelty, and disorder; they have got the better of a bad reputation, and do not so much as care to dissemble a good.

Manley was involved in a circle of women writers that included Aphra Behn, Catherine Trotter and Katherine Philips; Manley even provided a poem for Trotter’s play version of Behn’s Agnes de Castro in praise of her predecessors and women poets in general. (Orinda is Philips’ pseudonym, Astrea is Behn’s.)

Orinda and the fair Astrea gone
Not one was found to fill the Vacant Throne:
Aspiring Man quite regained the Sway,
Again had taught us humbly to obey;
Till you (Nature’s third start, in favour of our Kind)
With stronger Arms, their Empire have disjoined,
And snatched a laurel which they thought their Prize,
Thus Conqueror, with your Wit, as with your Eyes.
Fired by their bold Example, I would try
To turn our Sexes weaker Destiny.
O! How I long in the Poetic Race,
To loose the Reins, and give their Glory Chase;
For thus encouraged, and thus led by you?
Methinks we might more Crowns than theirs Subdue.

Manley was probably the editor of a collection of poems on the death of Poet Laureate John Dryden in 1700, including one by Sarah Fyge Egerton. The two women were friends, though their politics were very different, and their friendship ended when Egerton gave evidence against Manley in a forgery trial.

The Dryden memorial volume The Nine Muses also included poems by Trotter and Susanna Centlivre. But despite her admiration for and solidarity with her fellow female authors in The New Atalantis Manley satirizes all these women – the attacks hidden behind fictional names of course.

Her spite was partly due to their Whig politics – Manley was a fervent Tory – but also for what she saw as various betrayals of her friendship; women can be scolds to each other as much as to men. Manley seems however to have been entirely in favor of Anne Finch, Countess of Winchilsea and reprints two of her poems, complete but unattributed, in The New Atalantis.

Delarivier Manley was highly prolific in many areas, including political journalism, pamphlets and magazines – she briefly edited Jonathan Swift’s Tory journal the Examiner – as well as plays and novels, most of which were what we now call scandal novels, the English equivalent of the French chroniques scandaleuses. Manley’s own life was indeed quite scandalous: she entered into a bigamous marriage with her cousin (which is why her maiden name and her married name are the same). 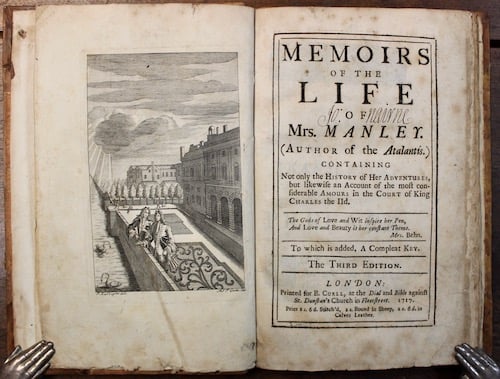 After that failed, she came under the patronage of Charles II’s mistress Barbara Villiers, Duchess of Cleveland. That relationship failed too and thereafter she supported herself by her writing; she was another early professional female writer though she insisted throughout her life that she never received enough financial recompense for her writing on behalf of the state.

Most of her political writings were published anonymously but Manley never attempted to hide her many affairs and indeed featured them extensively in her fiction which is mostly at least semi-autobiographical.

Her affairs seem to have been mostly heterosexual, although she moved in circles where lesbian relationships were not uncommon. The New Atalantis, which of course is not entirely fictional, heavily features the Cabal, a group of upper-class women, many of whom are in various artistic fields, who reject family and heterosexual relationships. They tend to dress as men: ‘they do not in reality love Men; but dote of the Representation of Men in Women. Hence it is that those Ladies are so fond of the Dress En Cavaliere.’

This kind of crossdressing society was very unusual in England, though much later in France there were female to male cross dressers like George Sand, the female societies that Colette described so vividly, the Monocle club in Paris and salons like that around Natalie Clifford Barney. 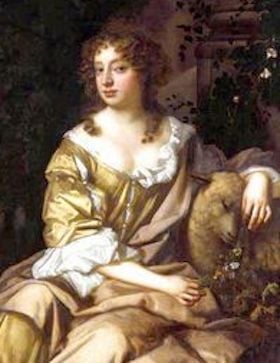 The women of the Cabal in The New Atalantis do occasionally have affairs with men which are indulged as temporary lapses by the other members; their main aim is of a higher kind of friendship between women, transcending the merely physical. Nevertheless, physical love between women is by no means considered shameful within the ranks of the Cabal if not in the rest of society.

Two beautiful Ladies joined in an Excess of Amity (no word is tender enough to express their new Delight) innocently embrace! for how can they be guilty? They vow eternal Tenderness, they exclude the Men, and condition that they will always do. What irregularity can there be in this? ‘Tis true, some things may be strained a little too far, and that causes Reflections to be cast upon the Rest.

Manley’s narrator, Astrea, is not a member of the Cabal and does not entirely approve; for Astrea friendship between women is perfectly acceptable as long as it does not lead to anything physical:

But if they carry it a length beyond what Nature designed and fortify themselves by these new-formed Amities against the Hymenial Union, or give their Husbands but a second place in their Affections and Cares; ‘tis wrong and to be blamed.

Even Manley is not so transgressive as to suggest that women should neglect their duty as wives.