My Ántonia by Willa Cather – an original 1918 review 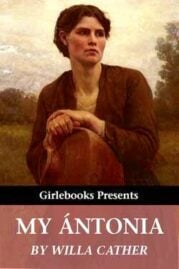 My Ántonia is considered one of the masterpieces of fiction by Willa Cather (1873 –1947). Published in 1918, it’s the last of her “prairie trilogy” of novels, preceded by O Pioneers! and The Song of the Lark.

Set in 19th-century Nebraska, the novel follows the life of  Jim Burden, an orphan boy from Virginia, and Ántonia Shimerda, the eldest daughter in an immigrant family from Bohemia (once part of Czechoslovakia).

The first year in the prairie leaves a potent impression on Ántonia and Jim, a theme that’s developed through the narrative. Cather created a book of singular beauty and simplicity, in which  the theme of community is united with her talent for creating character development.

A brief synopsis of My Ántonia by Willa Cather

From the Book of the Month Club edition of My Ántonia:

One of the most important writers of the twentieth century, Willa Cather mined her childhood experiences on the Nebraska plains and later her love for the Southwest to create timeless tales of romance, tragedy, and spiritual seeking. The author of 12 novels and nearly 60 short stories Cather won a Pulitzer Prize in 1922.

Her fourth novel, My Ántonia, which she thought ‘the best thing I’ve ever done,’ is set in pioneer-era Nebraska and is a story of contrasts — most noticeably the contrast between Ántonia Shimerda, the destitute child of Bohemian immigrants, and Jim Burden, a native Virginian who, after being orphaned at the age of ten, is sent to live with his grandparents in Nebraska.

The novel traces the parallel lives of Jim and Ántonia — Jim (said to be modeled on Cather herself) goes to Harvard, becomes a traveling businessman, and returns to Nebraska infrequently. Ántonia elopes with a shiftless railway conductor, comes home disgraced, and finds happiness with Anton Cuzak, a gentle farmer.

Like Alexandra Bergson of O Pioneers! — and like the land they call home — Ántonia comes to embody unshakable simplicity and integrity. 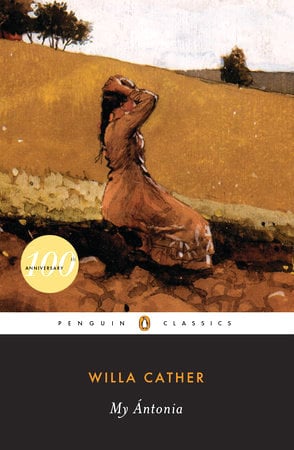 Francis Booth writes in Ántonia Shimerda: Singular Heroine of  Willa Cather’s My Ántonia: This is America’s bildungsroman as much as Ántonia’s, the story of the journey from virgin to sophisticate, from wild to tamed, from ingenuous to knowing, innocent to cynical, unstoried to storied. Much is gained, and much is lost in that journey.

My Ántonia earned high praise from critics and readers when it was first published, and continues to be read and studied. Following is a typical review from 1918, the year in which it was published.

A 1918 review of My Ántonia by Willa Cather

From the original review of My Ántonia by Willa Cather in the Chicago Daily Tribune, November 1918: From the time Willa Cather first began to write there have been two notable qualities in her stories, truth and distinction. The strong impulse of her realism has proved itself to be the vital part of her literary activity.

So now, after perhaps a quarter of a century of story and poetry writing, in which she has been temperate indeed in her output, she is able to offer a tale of such unusual simplicity and loveliness that it must make and hold its place.

About the Bohemian Ántonia

This story is called My Ántonia and the scene is that part of Nebraska in which Miss Cather passed her girlhood; the Nebraska in which Swedes, Russians, Bohemians, and Poles settled putting their vigor into the virgin land.

Antonia is a Bohemian, the daughter of an unhappy gentleman, a lover of books and refinement, who has married beneath him, and who, being outcast from his family, yields to the solicitations of his vigorous, harsh peasant wife and brings his family of four to America.

There amid the treeless prairie, in a dugout, Antonia makes her friends, bears her burdens, and, somewhat improved in estate, but still a woman of heavy soil, is left in her early middle age. Here, it is to be seen, are a few of the usual elements of American romance.

The Russians or the Norwegians might have selected such a woman and such a struggle for the subject of a story, but there are few Americans who would have ventured to do so — few who, perceiving that there is but one enduring romance, and that the romance of the human soul, would have the faith in their audience to believe that they, too, could see the interesting fact.

Miss Cather trusts her America to understand this very human woman pioneer with her unspeakable enjoyment of common life, her sturdy pride of being, her capacity for fitting into the scene. If ever any heroine ran her roots into the earth and blossomed in storm and wild sunlight, that heroine is Antonia.

When she is left, the wife of a hard working farmer, her own more ecstatic loves passed and done with, with her eleven children about her, she is still fascinating.

Indeed, she seems the genius of her fields of grain, abundant, superbly utilitarian, rejoicing in the morning the friend of man. Her powers of story telling, an inheritance, perhaps, from her peasant ancestors, her courtesy, her love, capable of expanding to meet any demands, give her almost heroic proportions, yet never remove her from the hearth or the realm of familiarity.

No question, Miss Cather has written a book of singular beauty and simplicity, in which her power of giving the essence of a community is united with a beautiful capacity for character creation. 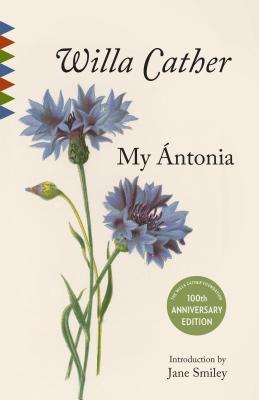 More about My Ántonia by Willa Cather

*These are Bookshop Affiliate and Amazon Affiliate links. If a product is purchased by linking through, Literary Ladies Guide receives a modest commission, which helps to maintain our site and keep it growing!