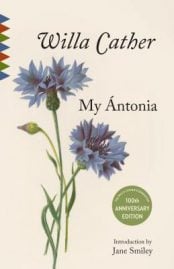 This character analysis of Ántonia Shimerda, the heroine of My Ántonia by Willa Cather (1873-1947) is excerpted from Girls in Bloom: Coming of Age in the Mid-20th Century Woman’s Novel  by Francis Booth, reprinted by permission.

My Ántonia (1918) is the third of Willa Cather’s Midwestern pioneer novels (often referred to as the Prairie Trilogy) of early twentieth century frontier life which, despite their brevity, manage to encompass the epic sweep of the pioneering move to the West, seeming to hark back to an earlier era of rugged individualism.

Despite the title, Ántonia (the Shimerda family have come from Bohemia; all Czech names have the stress on the first syllable, hence the accent over the Á) is not the narrator nor even the central character; she is always slightly off to one side and a little out of focus.

Nevertheless, this is a true coming of age story; at the end it fast forwards to Ántonia being a middle-aged woman having had a large number of children, but not with the narrator: despite the title, she is not and never has been ‘his’ Ántonia.

A family in Nebraska Territory

Unusually, a female author uses a male narrator: Jim Burden, ten years old at the start of the novel – Ántonia is two years older – to tell the story of his and other immigrant families, mostly newly arrived from Europe, settling in the virgin territory of Nebraska. The Shimerdas have been tricked by a relative into paying too much for unfit, unusable land, animals and dwellings; at first they live in not much more than a hole in the ground.

Ántonia’s father cannot reconcile himself to this hard new life; he has been a respected musician in Bohemia but is now reduced to extreme poverty. He kills himself after one misfortune too many.

After their father’s death, Ántonia’s older brother Ambrosch becomes the head of the family and tries, in his own way, to protect her. When she gets a job as cook for a neighboring family, the brother fights to stop her from becoming independent.

“They had a long argument with Ambrosch about Ántonia’s allowance for clothes and pocket-money. It was his plan that every cent of his sister’s wages should be paid over to him each month, and he would provide her with such clothing as he thought necessary. When Mrs Harling told him firmly that she would keep fifty dollars a year for Ántonia’s own use, he declared they wanted to take his sister to town and dress her up and make a fool of her.

Mrs Harling gives a lively account of Ambrosch’s behavior throughout the interview; how he kept jumping up and putting on his cap if he were through with the whole business, and how his mother tweaked his coat-tail and prompted him in Bohemian. Mrs Harling finally agreed to pay three dollars a week for Ántonia’s services – good wages in those days – and to keep her in shoes. There had been hot dispute about the shoes, Mrs Shimerda finally saying persuasively that she would send Mrs Harling three fat geese every year to ‘make even.’ Ambrosch was to bring his sister to town next Saturday.

‘She’ll be awkward and rough at first, like enough,’ grandmother said anxiously, ‘but unless she’s been spoiled by the hard life she’s led, she has it in her to be a real helpful girl.’

Mrs Harling laughed her quick, decided laugh. ‘Oh, I’m not worrying, Mrs Burden! I can bring something out of that girl. She’s barely seventeen, not too old to learn new ways. She’s good looking too!’ she added warmly.”

Bildungsroman for a girl and a country

The narrator, Jim, tells us how good it is ‘to have Ántonia near us again; to see her every day and almost every night!’ But he does not seem to have, and certainly does not convey to Tony, as he sometimes calls her, any romantic or sexual desires towards her, even though he is ‘jealous of Tony’s admiration for Charley Harling.

Because he was always first in his classes at school, and could mend water-pipes or the door-bell and take the clock to pieces, she seemed to think him a sort of Prince. Nothing that Charley wanted was too much trouble for her.’

Jim’s family move from the relative wilderness of the open fields to the relative civilization of the nearest nearby town, Black Hawk. All this is happening just at the time in American history where the Europeans who had first tamed the wild plains of states like Nebraska were Europeanizing the frontier. This is America’s bildungsroman as much as Ántonia’s, the story of the journey from virgin to sophisticate, from wild to tamed, from ingenuous to knowing, innocent to cynical, unstoried to storied. Much is gained, and much is lost in that journey.

“There was a curious social situation in Black Hawk. All the men felt the attraction of the foreign, well-set-up country girls who had come to town to earn a living, and, in nearly every case, to help the father struggle out of debt, or to make it possible for the younger children of the family to go to school.

These girls had grown up in the first bitter-hard times, and had got little schooling themselves. But the younger brothers and sisters, for whom they made such sacrifices and who have had ‘advantages,’ never seem to me, when I meet them now, half as interesting or as well educated. The older girls, who helped break up the wild sod, learned so much from life, from poverty, from their mothers and grandmothers; they had all, like Ántonia, been early awakened and made observant by coming at a tender age from an old country to a new.”

From time to time, traveling entertainers set up a tent in the town where they stage plays and hold dances. ‘Ántonia talked and thought of nothing but the tent.’ This changes not only Ántonia – formerly a total innocent – but men’s attitudes to her. She has come of age from girl to woman in their eyes.

“Ántonia’s success at the tent had its consequences. The iceman lingered too long now, when he came into the covered porch to fill the refrigerator. The delivery boys hung about the kitchen when they brought the groceries. Young farmers who were in town for Saturday came tramping through the yard to the back door to engage dancers, or to invite Tony to parties and picnics.”

Mr Harling, acting, like her own brother, in loco parentis, tells her she must stop. ‘This is what I’ve been expecting, Ántonia. You’ve been going with girls who have a reputation for being free and easy, and now you’ve got the same reputation… This is the end of it, to-night. It stops, short. You can quit going to these dances, or you can hunt another place. Think it over.’

For him, as for most men, a girl can either be a shy virgin or a seductive siren; there is no middle ground. Ántonia decides to leave, she has been offered work in another house. Mrs. Harling tells her something has changed within her. ‘I don’t know, something has… A girl like me has got to take her good times when she can. Maybe there won’t be any tent next year. I guess I want to have my fling, like the other girls.’

The narrator himself seems to think that Ántonia is now available: he takes her home after the dance and tells her she must kiss him good night. ‘Why, Jim! You know you ain’t right to kiss me like that. I’ll tell your grandmother on you!’ He tells her that her friend Lena let him kiss her, ‘and I’m not half as fond of her as I am of you.’ Being two years older than Jim, Ántonia is more concerned about his future than he is for hers.

Jim does make good, ending up at Harvard. Ántonia on the other hand is tricked by the man she had been going out with into going away with him; he leaves her, pregnant, before they are married. She returns in shame though she is unbowed.

When he comes back from school Jim says to her, ‘since I’ve been away, I think of you more often than of anyone else in this part of the world. I’d have liked to have you for a sweetheart, or a wife, or my mother or my sister – anything that a woman can be to a man.’ She looks at him with her ‘bright, believing eyes,’ glad that he remembers her so fondly when she had disappointed him.

‘Ain’t it wonderful, Jim, how much people can mean to each other? I’m so glad we had each other when we were little. I can’t wait till my little girl’s old enough to tell her about all things we used to do.’ Jim tells her when he goes away again that he will come back, but he doesn’t; ‘life intervened, and it was twenty years before I kept my promise.’ By this time she is married to a poor but honest man from Bohemia and has a large number of children.

“Before I could sit down in the chair she offered me, the miracle happened; one of those quiet moments that clutch the heart, and take more courage than the noisy, excited passages in life. Ántonia came in and stood before me; a stalwart, brown woman, flat-chested, her curly brown hair a little grizzled. It was a shock, of course. It always is, to meet people after long years, especially if they have lived as much and as hard as this woman had. We stood looking at each other. The eyes that peered anxiously at me were – simply Ántonia’s eyes.”

More about My Ántonia by Willa Cather