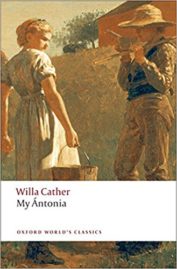 My Ántonia (1918) by American author Willa Cather (1873 – 1947), is considered one of her masterpieces in a body of stellar works. My Ántonia is the last book of her “prairie trilogy” of novels, preceded by O Pioneers! and The Song of the Lark.

The novel takes place in 19th-century Nebraska and tells the stories of an orphan boy from Virginia, Jim Burden, and the eldest daughter in an immigrant family from Bohemia, Ántonia Shimerda, who were each brought to be pioneers. In the harsh prairie, Ántonia makes friends and improves the condition of the land.

The first year in the prairie leaves lifelong impressions in both children, a theme that’s explored throughout the novel. Cather was highly praised for My Ántonia, bringing the American West to life and making it fascinating to generations of readers.

There is no question that Cather created a book of singular beauty and simplicity, in which her power of giving the essence of a community is united with an immense capacity for character development. Here are quotes from My Ántonia, an enduring classic novel by the prolific Willa Cather: 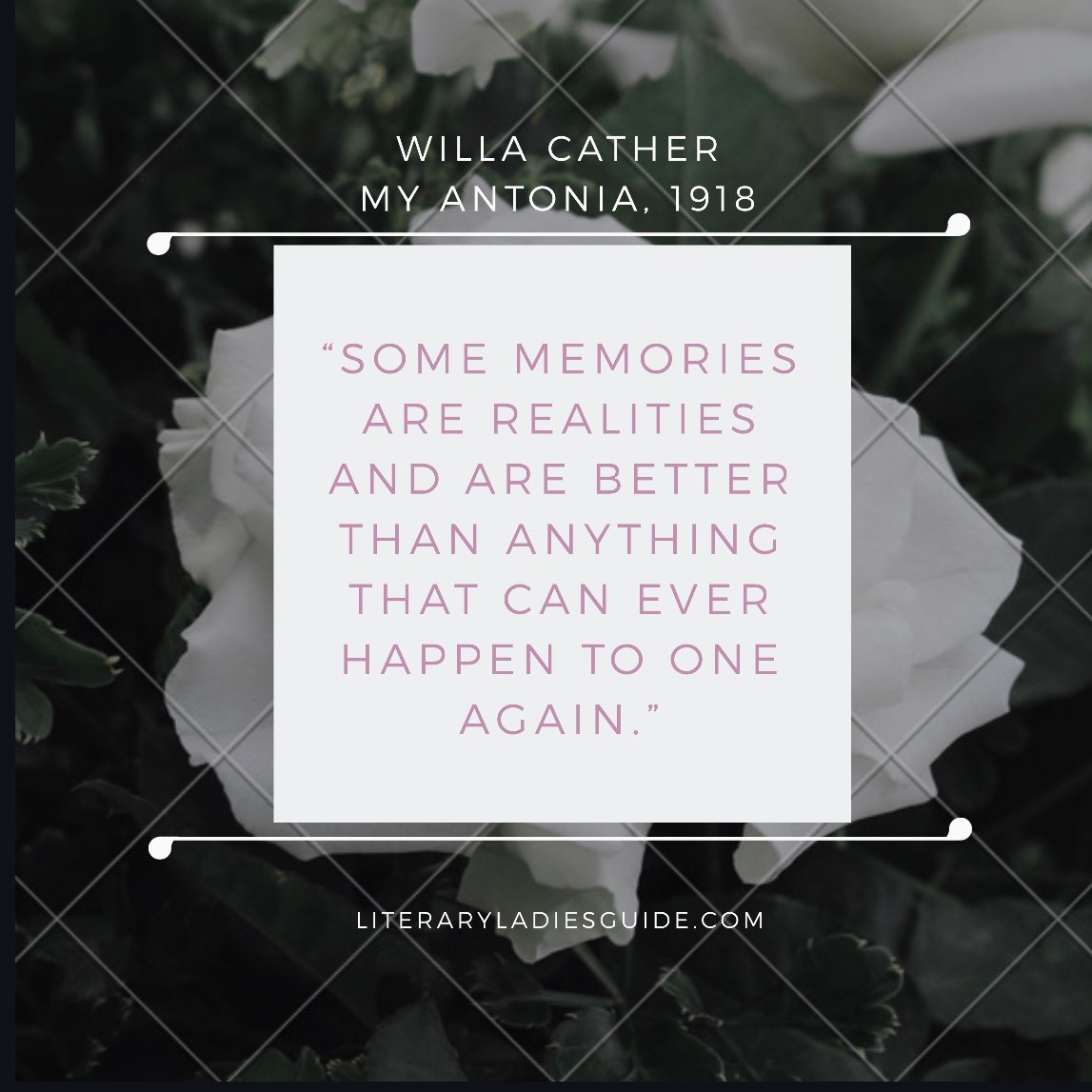 “Some memories are realities and are better than anything that can ever happen to one again.”

“If there were no girls like them in the world, there would be no poetry.”

“I was something that lay under the sun and felt it, like the pumpkins, and I did not want to be anything more. I was entirely happy. Perhaps we feel like that when we die and become a part of something entire, whether it is sun and air, or goodness and knowledge. At any rate, that is happiness; to be dissolved into something complete and great. When it comes to one, it comes as naturally as sleep.”

“The country girls were considered a menace to the social order. Their beauty shone out too boldly against a conventional background.”

“The sky was growing pale, and that forgotten plow had sunk back to its own littleness somewhere in the prairie.”

“Now I understood that the same road was to bring us together again. Whatever we had missed, we possessed together the precious, the incommunicable past.”

“She’d always believe him. That’s Ántonia’s failing, you know; if she once likes people, she won’t hear anything against them.” 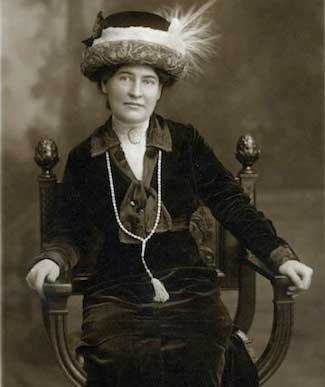 “The idea of you is part of my mind … you really are a part of me.”

“I was convinced that man’s strongest antagonist is the cold.”

“This is reality, whether you like it or not — all those frivolities of summer, the light and shadow, the living mask of green that trembled over everything, they were lies, and this is what was underneath. This is the truth.”

“Whatever we had missed, we possessed together the precious, the incommunicable past.”

“That is happiness; to be dissolved into something complete and great. When it comes to one, it comes as naturally as sleep.”

“There seemed to be nothing to see; no fences, no creeks or trees, no hills or fields. If there was a road, I could not make it out in the faint starlight. There was nothing but land: not a country at all, but the material out of which countries are made.”

“The prayers of all good people are good.”

“As I went back alone over that familiar road, I could almost believe that a boy and girl ran along beside me, as our shadows used to do, laughing and whispering to each other in the grass.”

“This was enough for Ántonia. She liked me better from that time on, and she never took a supercilious air with me again. I had killed a big snake – I was now a big fellow.”

“More than any other person we remembered, this girl seemed to mean to us the country, the conditions, the whole adventure of our childhood.”

“There was nothing but land: not a country at all, but the material out of which countries are made.”

“The eyes peering anxiously at me were—simply Ántonia’s eyes … She was there, in the full vigor of her personality, battered but not diminished.”

“Ántonia came up to me and held out her hand coaxingly. In a moment we were running up the steep draw side together.”

“I was thinking, as I watched her, how little it mattered– about her teeth, for instance. I know so many women who have kept all the things that she had lost, but whose inner glow has faded. Whatever else was gone, Antonia had not lost the fire of life.”

“I knew that I should never be a scholar. I could never lose myself for long among impersonal things. Mental excitement was apt to send me with a rush back to my own naked land and the figures scattered upon it.”

“I knew it was homesickness that had killed Mr. Shimerda, and I wondered whether his released spirit would not … find its way back to his … country.”

“Things will be easy for you. But they will be hard for us.”

“I’ve seen a good deal of married life, and I don’t care for it. I want to … not have to ask lief of anybody.”