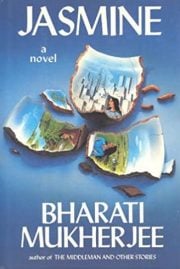 Bharati Mukherjee (1940 – 2017), who made her life in America, has written many books about the immigrant experience. Jasmine, published in 1989, is probably among the best as it picks up on the transition in a very nuanced fashion, not sparing us the horrors, either.

It is quite likely that the author’s personal experiences have contributed to the deep insights that can grab readers and keep them riveted. Mukherjee was born in what is now called Kolkata (Calcutta at the time she was born when under Indian rule). In the course of her prolific career, she wrote many works of fiction and nonfiction and taught at a number of American universities.

The protagonist of Jasmine starts her life with the name Jyoti, then adopts the name Jasmine, when her husband lovingly rechristens her. Finally, she becomes Jane, after making the move to America. The names that Bharati chooses for her character become synonymous with the transformations within and without, as she is tossed from one life-changing reality to another; each one stripping her of an identity.

The story starts with Jyoti recalling her life in a small village in Punjab in the North of India where an old astrologer predicts that she will be widowed and then exiled from her own country. But she is Jane now, aged twenty-four and living in Baden, Elsa Country, Iowa, with her partner, Bud Ripplemeyer, who is a much-older divorcee and wheelchair-bound after a shooting accident.

Jane is carrying Bud’s child and he would like for them to be married, but she resists. She has already seen tragedy, having been widowed at seventeen. She has lost her husband who loved her dearly and whose dream it was to move to Florida in the U.S. It is to fulfill his dream that she makes the long journey out of India, suffering trials and tribulations along the way. 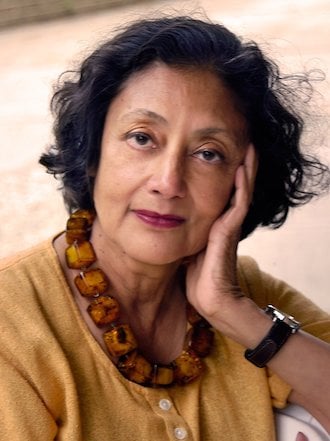 Modern notions in India of the 1970s are also revealed through the views of Prakash, Jasmine’s futuristic husband who believed, “love was letting go. Independence, self-reliance.” He also believed that to have a “real life,” they had to go to America.

The author uses the first-person and several flashbacks as the story unfolds. As much as Jane attempts to understand the American ways, she brings a bit of India into the lives of the people around. She writes, “They get disappointed if there’s not something Indian on the table” and about how a farmer in the vicinity helps her plant Indian herbs like coriander, fenugreek, and “five kinds of chili peppers.”

The Asian transformation has made Bud “reckless and emotional,” which also has him adopt a teenage Vietnamese boy to “make up for fifty years of selfishness.”

Quite often across the narrative, one finds Jane holding things back, “I have to be careful about nearly everything I say.” Original perspectives also come into play as to why she finds herself hoarding water in all the used-up receptacles around the house in Baden. Her mind wanders back to “water famines in Hasnapur, how at the dried-out well, docile women turned savage for the last muddy bucketful.”

The author’s problems with her adopted country also reveal themselves in the narrative as when she writes, “this country has so many ways of humiliating, of disappointing.” Jane has to accept terms like she is a “dark-haired girl’ or has a “darkish complexion.”

But, even she has to admit that when she is hired to work as an au pair with the Taylor family in New York, they are “democratic” in the way that they treat her, providing her a room to herself, fixed working hours and substantial wages.

It may also interest readers to know that whilst Bharati Mukherjee wrote of hyphenated identities, she always fought shy of that label saying, “I am American, not an Asian-American.” 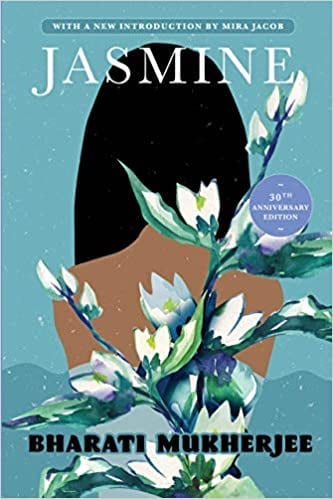 Despite a hint of fatalism, a satisfying ending

The clash of philosophical beliefs also unfurl in Jasmine when Jane tries to explain to Taylor, “a whole life’s mission might be to move a flowerpot from one table to another,” and he replies, “I couldn’t live in a world like yours … If rearranging a particle of dust is as important as discovering relativity, that’s a formula for total anarchy. Total futility. Total fatalism. Where’s the incentive to do anything?”

Despite the hint at fatalism, Jane tells herself, “I do believe that extraordinary events can jar the needle arm, jump tracks, rip across incarnations, and deposit a life into a groove that was not prepared to receive it.”

And finally, the happy but unexpected ending, when Jane makes peace with her foretold destiny and whispers an imagined rejoinder to the astrologer, “Watch me reposition the stars.”