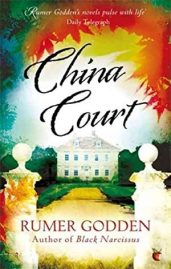 At first glimpse, China Court by Rumer Godden, the prolific British author, seems fairly straightforward. But this 1961 novel is a book of subtlety and many layers. The grand house that is called China Court is almost a character in itself, developing alongside its human inhabitants.

Though not as widely read as she was during her lifetime, Rumer Godden’s books still resonate with contemporary readers. Though there are some mixed reviews, overall, China Court ranks highly in this reader discussion on Goodreads.

Originally subtitled The Hours of a Country House, here it’s described by the publisher of the 2021 edition (Open Road Media):

“A New York Times-bestselling novel of the lives, loves, and foibles of five generations of a British family occupying a manor house in Wales.

For nearly one hundred and fifty years the Quin family has lived at China Court, their magnificent estate in the Welsh countryside. The land, gardens, and breathtaking home have been maintained, cherished, and ultimately passed along–from Eustace and Adza in the early nineteenth century to village-girl-turned-lady-of-the-manor Ripsie Quin, her children, and her granddaughter, Tracy, in the twentieth.

Brilliantly intermingling the past and the present, China Court is a sweeping family saga that weaves back and forth through time. The story begins at the end, in 1960, with the death of the indomitable Ripsie, whose dream of a life at the grand estate was realized through her marriage to the steadfast Quin brother who loved her–though he wasn’t the one she had always loved.

With thrilling literary leaps across the decades, the story of a British dynasty is told in enthralling detail. It is a chronicle of wives and husbands; of mothers, sons, and daughters; of those who could never stray far from the lush grounds of China Court and the outcasts and outsiders who would never truly belong.

Bearing comparison to One Hundred Years of Solitude by Gabriel García Márquez, Rumer Godden’s novel relates the history of a family with sensitivity, wit, compassion, and a compelling touch of magical realism.

A family’s loves, pains, triumphs, and scandals are laid bare, forming an intricate tapestry of heart-wrenching humanity, in a remarkable work of fiction from one of the most acclaimed British novelists of the twentieth century.” 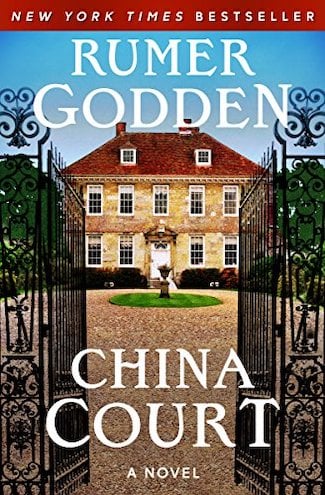 A 1961 review of China Court by Rumer Godden

From the original review of China Court in the Daily News Leader (Staunton, Virginia), February 26, 1961:

Whether she is writing of India, where she spent her childhood — as in The River, Black Narcissus, and Kingfishers Catch Fire; or of her native England, as in A Candle for St. Jude, An Episode of Sparrows; or of France, as in The Greengage Summer, Rumer Godden writes not only with great skill but with a strong feeling for place and an obvious affection for people.

China Court is a lovely old Cornish manor house: “It must have looked very plain, quite uncompromising, when it was first built. It is a granite house; naturally, granite is the local stone.”

As Miss Godden tells its story, this great house, built and lived in with such pride in the 19th century, has become an anachronism — inefficient, uneconomical, wholly impractical. Only old Mrs. Quin and her 21-year-old granddaughter, Tracy, love. To them it’s more than a house, it’s their home.

Other members of the family — Mrs. Quin’s daughters and their husbands, Tracy’s aunts and uncles — believe emphatically that the place should be disposed of: “It’s ridiculous, Mother, you living alone in that great house … It has no amenities … If you sold it, even as it is now, you could have a much bigger income and comfortable little flat. You would be far more free.”

In her beautifully worked-out story, one ranging back and forth across five generations, Miss Godden tells of China Court and of the people who have filled it with warmth and life. In the end it is the eccentricity of one generation which comes to the rescue of another, and which makes it possible to save the house for future descendants of the Quins.