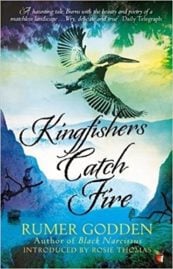 From the 1953 Viking Press edition of Kingfishers Catch Fire by Rumer Godden: returning to the scene of her best love books, Rumer Godden now brings us another moving story of India.

Kingfishers Catch Fire has all the color, tenderness, and humor, and the feeling for the local inhabitants’ ways, that marked The River as a book and a film.

It also has the kind of the emotion that Miss Godden’s peculiar gift — the emotion of an individual threatened by mysterious alien forces.

Sophie Barrington Ward, without a husband, with two children and very little income, it Is faced with making a new life for herself. Friends beg her to go back to the security of Camberley. But the aunt who knows her best says, “Sophie will do as she likes. She always does.”

What she likes, in this case, is to stay in India — and not in the Westernized India either, but in a little Villa in the beautiful Vale of Kashmir. Sophie is determined to make a home in this Eden, and live with Indians harmoniously. 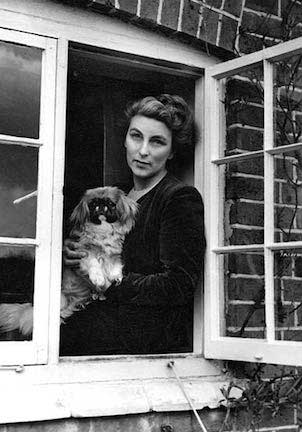 Whether Sophie can save this situation, whether she will weaken and escape on the arm of an old admirer, makes the final drama of the book. It leaves the reader with a sense of having lived an actual life in a baffling and beautiful land.