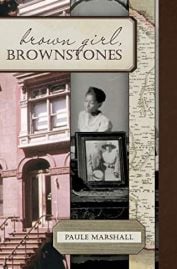 Brown Girl, Brownstones was the first novel by Paule Marshall, a semi-autobiographical story about the Barbadian immigrant community in 1930s and 1940s Brooklyn. Published in 1959, it remained the best-known work in Marshall’s distinguished career.

Paule Marshall (1929 – 2019) was born Valenza Pauline Burke. As a young teen, she became enamored of Paul Laurence Dunbar’s poetry and changed her name to reflect his.

Like her almost-contemporary author Audre Lorde, her work was influenced by her experiences as the daughter of parents from the West Indies.

Her long career was marked by major awards, including the Guggenheim and MacArthur Fellowships; she taught at several universities as well. In the end, her renown circled back and landed at the place where she began — in her first, and very fine novel.

The 2009 reprint edition of Brown Girl, Brownstones encapsulates the book:

“Selina’s mother wants to stay in Brooklyn and earn enough money to buy a brownstone row house, but her father dreams only of returning to his island home. Torn between a romantic nostalgia for the past and a driving ambition for the future, Selina also faces the everyday burdens of poverty and racism.

Written by and about a daughter of Barbadian immigrants, this coming-of-age story unfolds during the Great Depression and World War II. Its setting — a close-knit community of immigrants from Barbados — is drawn from the author’s own experiences, as are the lilting accents and vivid idioms of the characters’ speech.

Paule Marshall’s 1959 novel was among the first to portray the inner life of a young Black female, as well as depicting the cross-cultural conflict between West Indian immigrants and African Americans. It remains a vibrant, compelling tale of self-discovery.”

A 1959 review of Brown Girl, Brownstones by Paule Marshall

Like another tree that famously grew in Brooklyn, a new, vigorous and generally captivating one takes root and eventually blooms over there in this first novel titled Brown Girl, Brownstones by Paule Marshall. If a prediction is in order this day, we may all be delighting in it for a long time to come.

Paule Marshall is Brooklyn-born and bred, but in a special world within that tumultuous world of numerous races, many churches and the shades of departed trolleys and Dodgers. The Barbadian colony is her province, to which her parents came from the West Indies sometime before her own first look at this or any other part of the world thirty years ago.

How much of this tender, smoldering tale is her own and her family’s story is not a matter of public report. A good deal of it, one must guess offhand, since she like the remarkable heroine of her novel learned about life in the roar of Fulton St., and went on from there to build a career of her own as a first-generation American.

But the parallel doesn’t really matter, except as it stamps these pages with that special conviction of experience truly recaptured.

The first thing about “Brown Girl, Brownstones” that matters, and it strikes you as early as page one, is style. Mrs. Marshall has it. It is a fine, flexible one, relaxing into the rhythms of Barbadian American speech, tense and driving when the Barbadian blood stirs into action, an instrument always under the full control of one to whom the use of language seems as natural as breathing.

“In the somnolent July afternoon the unbroken line of brownstone houses down the long Brooklyn street resembled an army massed at attention,” the story begins. Long ago, in one of those stately, mirrored homes, old Dutch and English families lived. Now it is 1939, and times and tenants have changed.

Dust lies over the faded grandeur, the faucets shudder and groan, and emigrants from the Barbados Islands struggle for a foothold. In this particular brownstone there are, notably, the Boyces: Deighton Boyce, charming and improvident; his wife, Silla, wary, fierce, possessive and loving: their two daughters, Ina, just coming into adolescence, and Selina, aged ten.

Just about everybody in the house and the neighborhood has a strikingly individual character, but Selina is the one to keep your eye on. Indeed, you could hardly help it. She is large-eyed, long-legged, flat-bodied, and a fighter.

Selina loves her lazy, poetic father, who dreams the days away, toying with such improbable devices as correspondence school courses in trumpet playing and radio repairing to avoid the horror of getting a job.

In temperament she is her mother’s daughter and that is the heart of Mrs. Marshall’s story of love that often wears the mask of hatred, and a girl moving away from her people even when she knows the bond is unbreakable.

The years drift by, and this Brooklyn tree, like that earlier one named Francie Nolan, grows in the hard soil of reality. Good and evil, strength and weakness are not so far apart as they frequently seem, she learns. She acquires a lover. She becomes an artist. She goes to a city college and for the first time encounters the white world.

At that point the narrative falters, its self-sustained flow yielding to studied, polemical patches about the Race Question. But it picks up again and goes on to an ending at once poignant and triumphant. As a matter of fact, the book as a whole is Mrs. Marshall’s triumph, a quiet but assured one. 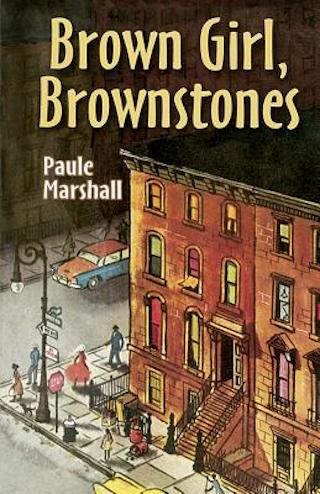