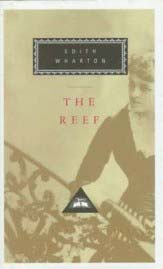 From the 1996 Alfred A. Knopf / Borzoi edition of The Reef: Edith Wharton was at the height of her enormous literary powers when she published The Reef in 1912, and everything about this novel suggests a mastery so complete that it can achieve nothing higher.

The plot, which tells of the drastic effects of a casual sexual betrayal on the lives of four Americans in France, is expertly turned, suspenseful, continually compelling. An assured, unhurried dramatic instincts governs the great moments of confrontation and revelation.

The central characters, two of whom are innocents and two of whom are burdened by experience and tinged with desperation, are perfectly delineated: their relationships to one another are constructed with a classical feeling for harmony, proportion, and balance.

And the entire novel is imbued with clear-eyed wisdom about the possibilities and limitations of human love. Wharton would go on to write splendid books after completing The Reef, but nowhere does she display a finer command of her art than she does here. 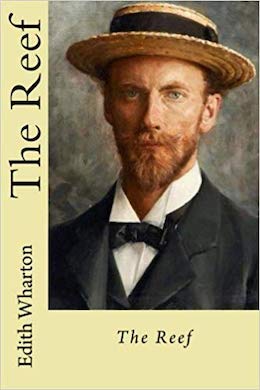 The Reef by Edith Wharton on Amazon

How The Reef begins …

All the way from Charing Cross to Dover the train had hammered the words of the telegram into George Darrow’s ears, ringing every change of irony on its commonplace syllables: rattling them out like a discharge of musketry, letting them, one by one, drip slowly and coldly into his brain, or shaking, tossing, transposing them like the dice in some game of the gods of malice; and now, as he emerged from his compartment at the pier, and stood facing the wind- swept platform and the angry sea beyond, they leapt out at him as if from the crest of the waves, stung and blinded him with a fresh fury of derision.

She had put him off at the very last moment, and for the second time: put him off with all her sweet reasonableness, and for one of her usual “good” reasons–he was certain that this reason, like the other, (the visit of her husband’s uncle’s widow) would be “good”!

But it was that very certainty which chilled him. The fact of her dealing so reasonably with their case shed an ironic light on the idea that there had been any exceptional warmth in the greeting she had given him after their twelve years apart.

They had found each other again, in London, some three months previously, at a dinner at the American Embassy, and when she had caught sight of him her smile had been like a red rose pinned on her widow’s mourning.

He still felt the throb of surprise with which, among the stereotyped faces of the season’s diners, he had come upon her unexpected face, with the dark hair banded above grave eyes; eyes in which he had recognized every little curve and shadow as he would have recognized, after half a life-time, the details of a room he had played in as a child.

And as, in the plumed starred crowd, she had stood out for him, slender, secluded and different, so he had felt, the instant their glances met, that he as sharply detached himself for her. All that and more her smile had said; had said not merely “I remember,” but “I remember just what you remember”; almost, indeed, as though her memory had aided his, her glance flung back on their recaptured moment its morning brightness.

Certainly, when their distracted Ambassadress — with the cry: “Oh, you know Mrs. Leath? That’s perfect, for General Farnham has failed me” — had waved them together for the march to the dining room, Darrow had felt a slight pressure of the arm on his, a pressure faintly but unmistakably emphasizing the exclamation: “Isn’t it wonderful?–In London–in the season — in a mob?”

Little enough, on the part of most women; but it was a sign of Mrs. Leath’s quality that every movement, every syllable, told with her. Even in the old days, as an intent grave- eyed girl, she had seldom misplaced her light strokes; and Darrow, on meeting her again, had immediately felt how much finer and surer an instrument of expression she had become.

Their evening together had been a long confirmation of this feeling. She had talked to him, shyly yet frankly, of what had happened to her during the years when they had so strangely failed to meet.

She had told him of her marriage to Fraser Leath, and of her subsequent life in France, where her husband’s mother, left a widow in his youth, had been re-married to the Marquis de Chantelle, and where, partly in consequence of this second union, the son had permanently settled himself.

She had spoken also, with an intense eagerness of affection, of her little girl Effie, who was now nine years old, and, in a strain hardly less tender, of Owen Leath, the charming clever young stepson whom her husband’s death had left to her care…

More about The Reef by Edith Wharton