Scarlett by Alexandra Ripley: The Authorized Sequel to Gone With the Wind 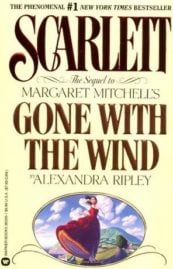 The Estate of Margaret Mitchell is very strict in terms of what they will allow to be done with the intellectual property of Gone With the Wind, one of the biggest blockbusters in American literary history.

So it was a quite a coup that Scarlett by Alexandra Ripley was published as an authorized sequel to GWTW. Though this book was scorned by critics, it was a commercial success. The following description is from the 1991 Warner book edition:

Gone With the Wind … dramatic, romantic, sweeping in its depiction of a time and place in American history, unparalleled in its portrayal of men and women at once larger than life and as real as ourselves …

Now, the story begun in Margaret Mitchell’s great classic, the story that closed with a young woman telling herself, “Tomorrow is another day,” continues — and the love affair between Scarlett O’Hara and Rhett Butler reaches its startling culmination.

Four years in the writing, Scarlett: The Sequel to Margaret Mitchell’s Gone With the Wind is the product of painstaking research, admiration and respect for the original work, and the fertile imagination of accomplished and bestselling historical writer Alexandra Ripley.

Scarlett seamlessly picks up the narrative, bringing us back to Tara and the people we remember so well: Rhett, Ashley, Mammy, Suellen, Aunt Pittypat, and of course, Scarlett herself.

Gone With The Wind: Echoing Through the Ages
Gone With the Wind: A Publishing Phenomenon
The Search for Scarlett O’Hara

We meet fascinating new men and women who enrich and enlarge the story. And we get to know many characters who stayed in the background of Margaret Mitchell’s broad opus, as they step forward in this sequel.

What happens to Ashley now that Melanie is gone? Does Scarlett find a way to get Rhett back? Where do the upcoming years take them? And what new joys, frustrations, and adventures does the future hold?

Using the elements and events set in motion in Margaret Mitchell’s novel, rich with surprises and exciting developments, Scarlett is an irresistible and colorful read that stands on its own, even as it satisfies our longing to re-enter the world of Gone With the Wind. 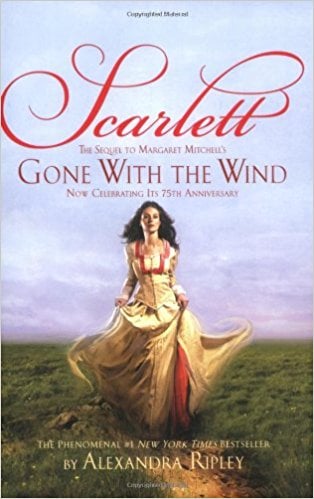 Scarlett by Alexandra Ripley on Amazon

An excerpt from Scarlett

Scarlett ran to Rhett and held her arms up to embrace him. “I’ve missed you so,” she said.

Rhett circled her wrists with his hands and lowered her arms to her sides. “Don’t, Scarlett,” he said. “Nothing’s changed.” His voice was quiet.

Scarlett was incapable of such restraint. “What do you mean?” she cried loudly.

Rhett winced. “Don’t force me to say it again, Scarlett. You know full well what I mean.”

“I don’t know. I don’t believe you. You can’t be leaving me, not really. Not when I love you and need you so awfully. Oh, Rhett, don’t just look at me that way. Why don’t you put your arms around me and comfort me? You promised Mammy.”

Rhett shook his head, a faint smile on his lips. “You are such a child, Scarlett. You’ve known me all these years, and yet, when you want to, you can forget all you’ve learned. It was a lie. I lied to make a dear old woman’s last moments happy. Remember, my pet, I’m a scoundrel, not a gentleman.”

He walked toward the door.

“Don’t go, Rhett, please,” Scarlett sobbed. Then she put both hands over her mouth to stop herself. She’d never be able to respect herself if she begged him again. She turned her head sharply, unable to bear the sight of him leaving. She saw the triumph in Suellen’s eyes and the pity in Will’s.

“He’ll be back,” she said, holding her head high. “He always comes back.” If I say  it often enough, she thought, maybe I’ll believe it. Maybe it will be true.” 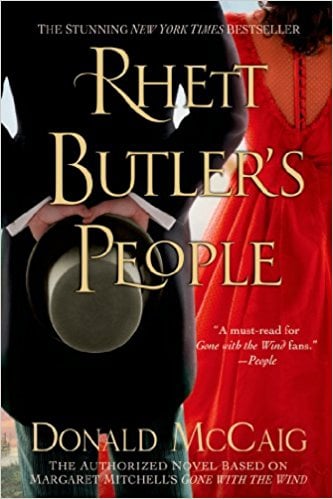 See also: 4 Prequels and Sequels to Gone With the Wind

More about Scarlett by Alexandra Ripley