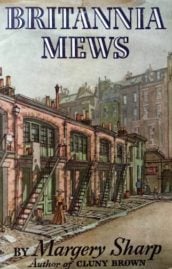 Britannia Mews by Margery Sharp is a 1946 novel that fits well into this British author’s skill for creating entertaining, lighthearted stories. Known for her wit and wry wisdom about human nature, Britannia Mews chronicles lives spanning three generations. The novel was adapted to a 1949 film, retitled The Forbidden Street. From the 1946 edition, the story is described in a nutshell:

“Britannia Mews had housed the horses and coachman of Adelaide’s family and their set in 1875. When Adelaide went to live there it was a slum, in which domestic tragedy and blackmail were only general terms for the turmoil of experience with that awaited her.

But Adelaide learned to take the worst along with the best, as she unhesitatingly took the two men in her life. As her story unfolds it becomes the richly varied account not only of an exceptional woman of an English family over three quarters of a century — an account that ends only after the buzz-bombs have spent their fury over England.”

Adelaide, the heroine of this novel, is a prototypical Margery Sharp creation. She joins Julia in The Nutmeg Tree, and the eponymous Cluny Brown as a young woman in charge of her own destiny, yet not without bumps along the way. Following is a thorough and insightful description of this midcentury tale that contemporary readers would do well to rediscover, written in 1946 by John P. Marquand for The Book-of-the-Month Club.

A novel polite yet biting

Miss Sharp has written a fine novel along the traditional lines in a beautifully cultivated style that is both polite and biting, and yet its whole complexion is devastatingly clear and modern. Without once deviating from good manners she can convey an illusion of pitiless reality, and she has shown by her skill and precision that narrative art can still rest on foundations of the past.

Britannia Mews describes quietly and competently the evolution of character and customs in England from Victoria to World War II … it makes one think, wistfully, thank Heaven for the Victorians, for George Eliot, Jane Austen, and the Brontës, who had the leisure and wit to write a fully rounded tale.

And one thing more, before we touch on its plot and significance — in all its pages there is not a single dull moment. 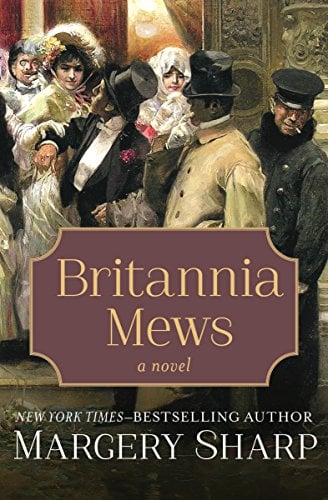 Not long after Alice in Wonderland appeared in its first edition — in 1875 to be exact — Adelaide Culver, a carefully trained little girl of eleven then, who must have looked very much like Alice, stepped unescorted, but secure in her childish values, from the back of her family’s house on Albion Place in London, not into a rabbit hole, but into the stable area that lay behind her proper dwelling.

This noisome, but then essential adjunct to middle-class British houses, was a cobblestone alley known as Britannea Mews, where proper people’s coachmen dwelt with their wives, progeny, and horses. Even when Adelaide first encountered it, Britannia Mews was falling into disrepute.

Her scandalized gouvernante snatched her back almost instantly, but not before Adelaide had an encounter with a slum girl. The Culvers moved away from pretentious but decaying Albion Place shortly after, and Adelaide was not to see the Mews again until, as an impressionable and unwise girl, she went there to propose marriage to her drawing teacher, an ineffective Lothario and steady drinker named Mr. Lambert.

The eccentricities of middle class Victorians

It is a difficult feat fairly to describe the conventions and the eccentricities of the insulated middle class of the Victorian era. Gently, with deft and kindly restraint, Miss Sharp draws the portraits of the Culver family — Adelaide’s stodgily correct parents; her silver cord brother; her nice sister, Alice, who made a nice marriage; her cousins, the Hambros; and Adelaide’s father’s sister who was not so nice.

Evan such a conventional device as Adelaide’s affair with this Mr. Lambert — the unchaperoned moment of the pencil and paper, the kiss, the certainly of honorable intentions, the clandestine meetings in Kensington Gardens by the Serpentine — Miss Sharp contrives to make logical and very sympathetic.

She does so because Adelaide is a remarkable girl, not because of looks or brilliance, but from her ability to face facts frankly and to know and be herself. 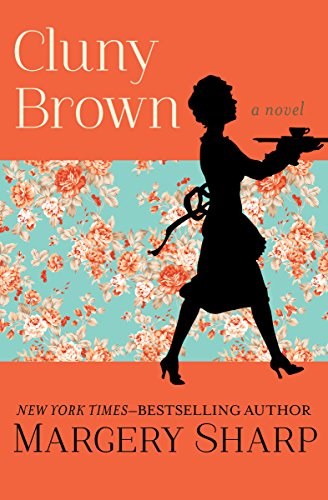 Adelaide was such a remarkable girl that she thought of marriage with Mr. Lambert as the inevitable corollary after a single flighty osculation, and her deep and unshaken conviction finally made the wretched Mr. Lambert surrender to it. Only later did she find that Mr. Lambert made passes at other young ladies who were his pupils, but to give him credit, he did his best to put the cards on the table.

He told her frankly to leave him be, that he had no money and that he was also a drunkard. It was not he but Adelaide who knew true love would conquer all. She had to marry Mr. Lambert right away for no better reason than that her family was moving to the country.

Earnestly, efficiently, and practically, Adelaide moved to her drawing master’s diggings in the slums of Britannia Mews. Naturally, after this whimsy, the door of polite society was closed on her securely.

Naturally, Mrs. Culver could only consider receiving her erring daughter when she came to her senses, left that man, and returned alone; but Adelaide was Adelaide because she know herself, and like her country in the last blitz, she did not know when she had been beaten. 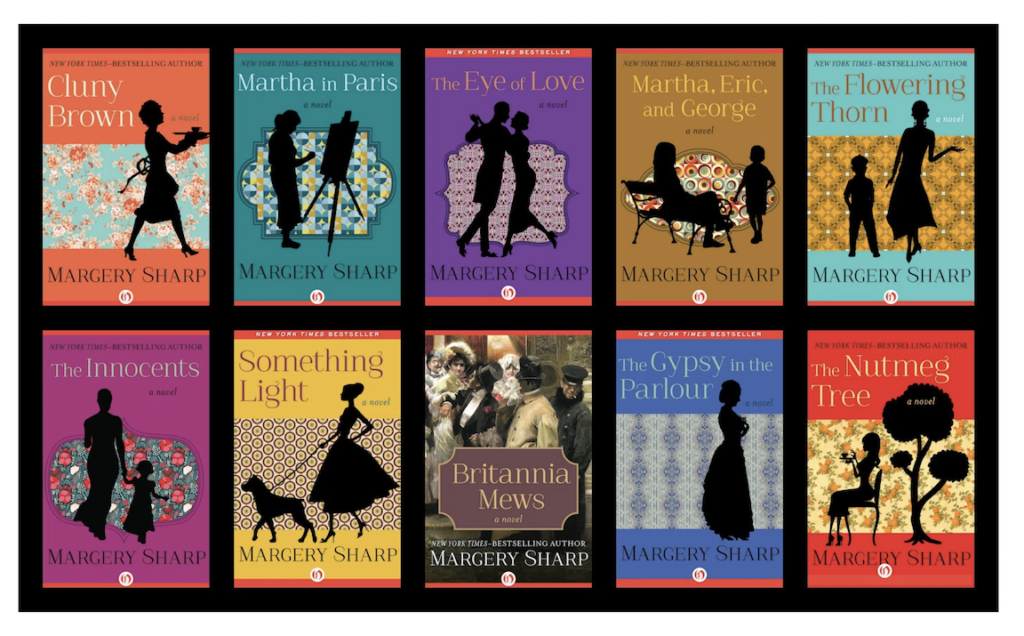 Margery Sharp’s novels can be found as  e-books on Amazon, starting with Cluny Brown
Book cover montage from The Margery Sharp Blog

The end of Mr. Lambert, the start of Gilbert

Except for an ability to make puppets, an art which he had learned during his salad days in Paris, Mr. Lambert was an utter failure as an artist and as a man.

Adelaide coped grimly with his drinking, his light-of-love, and their slum neighbors, until one day in an altercation she pushed him quite by accident, causing him to fall from the outer staircase of their stable dwelling to the cobblestones of Britannia Mews, where he fortunately died.

A neighbor, a huge, unsavory woman of the underworld, who witnessed the push, defended Adelaide at the inquest only to hold her later in the chains of fear and blackmail, still in Britannia Mews. Gilbert saved her from it. Gilbert was a broken, wasted British gentleman whom Adelaide extracted one evening from the gutter near the Mews pub.

Gilbert saved her from blackmail, and more than that, he found Mr. Lambert’s puppets. And this was the beginning of the puppet theater in Britannia Mews that flourished during World War I, though the 1920s, when the Mews became a night-club Bohemia, through the days when Adelaide became a theatrical figure, and until she died, a very old lady, in the buzz bomb era of World War II.

This, briefly, is the life story of Miss Sharp’s kind, proud, practical Adelaide, never very tolerant by always basically sound; but this is not all the story. Its theme is a study of the victory of an individual, and the triumph of personality over circumstance.

Entertaining, yet a first-rate novel

Told in this summary the framework of the novel may seem both arbitrary and artificial. It never is, however, because it is written by an artist who knows the use of incident, of fine, flowing narrative and delightful exposition. It is never contrived, because Miss Sharp has made all her large gallery of characters almost disturbingly alive.

Entertainment is a word now customarily used by critics when they don’t like a book, and to underline their dislikes they sometimes add that it is too easy to read. It may be well to face the fact, in case you don’t like such things, that Britannia Mews is always entertaining, and it even goes so far as to be intensely amusing when it should be.

Nevertheless, oddly enough, it is a first-rate novel of men, women, and manners. It even has social significance. It may be wrong to enjoy it and to feel cheered and relieved by it, but a great many readers will be. 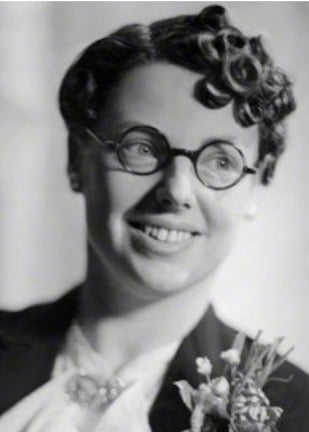