An Acceptable Time by Madeleine L’Engle (1989) 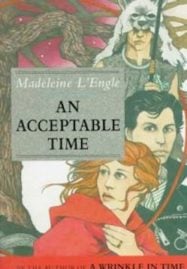 An Acceptable Time by Madeleine L’Engle (1989) is the last of the sci-fi series of  books featuring Polyhymnia O’Keefe (known as Poly in The Arm of the Starfish and Dragons in the Water, and Polly in A House Like a Lotus and this book). Polly’s parents are Meg Murry and Calvin O’Keefe, from the series that began with A Wrinkle in Time.

From the 1989 Farrar, Straus and Giroux edition of An Acceptable Time: When Polly O’Keefe visits her grandparents in Connecticut, she plans a quiet fall, filled with study and frequent forays to the star-watching rock.

A welcome diversion comes from Bishop Colubra, an old family friend, who is fascinated by the ancient hieroglyphics on stones found in the area. And a pleasant surprise is the appearance of Zachary Gray, the boy Polly had met in Greece the previous summer.

Zachary’s sudden appearance is only the beginning a series of events which turn Polly’s quiet visit into an extraordinary one.

While out walking, she encounters several strangers who are mysteriously compelling: Karralys, a tall, blue-eyed man who, Polly discovers, is a druid; Anaral, a beautiful young woman and a disciple of Karralys; and Tav, a fearless warrior. They all come from a society that existed 3,000 years ago! 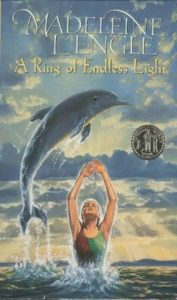 What seemed to be coincidences are gradually revealed as part of the pattern, an overlapping of planes of time. The bishop’s research and Zachary’s arrival are somehow related to the opening of the time gate which draws Polly into this ancient world.

Traveling across the millennia to play a crucial role in a prehistoric confrontation, Polly discovers the time means everything and nothing in the history of human relationships, and finally that love is the tie that binds.

Madeleine L’Engle once again explores the fluidity of time and the permanence of essential human values in An Acceptable Time.

How An Acceptable Time begins: Chapter 1

She walked through an orchard, fallen apples red and cidery on the ground, crossed a stone wall, And wondered on into a small wood. The path was carpeted with leaves, red, orange, gold, giving off a rich, earthy smell. Polly scuffed along, pushing the toes of her running shoes through the lavish brightness.

It was her first New England autumn and she was exhilarated by the colors drifting from the trees, dappling her hair with reflected amber and bronze. The sun shone with a golden haze through a muted blue sky. Leaves whispered to the ground. The air was crisp but not cold. She hummed with contentment. 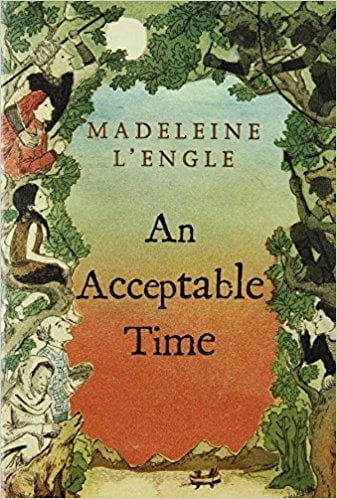 An Acceptable Time by Madeleine L’Engle on Amazon*

More about An Acceptable Time