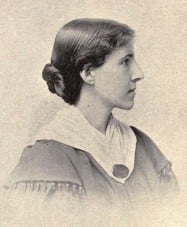 Charlotte resisted the marriage proposal of Charles Stetson, sensing that he wasn’t right for her. As it turned out, she was right. Within their first year of their 1884 wedding, she gave birth to a daughter and fell into a serious bout of postpartum depression. It didn’t help that the prevailing attitudes that women were frail creatures prone to irrational hysteria.

Famously, she later wrote the 1892 long short story (or novella)The Yellow Wallpaper based on her real-life experience with postpartum depression exacerbated by an unsympathetic husband and sexist doctors.

By 1888, Charlotte had left her husband — a rare and gutsy move at the time. She and her daughter moved to Pasadena, California, where she become involved with feminist causes and began writing and editing. She immersed herself in the suffrage movement as well as with labor and socialist organizations.

Get to know this thoughtful and prolific writer, best known for the aforementioned The Yellow Wallpaper, the treatiseWomen and Economics, and the feminist utopian trilogy that includes, Herland.

“It is not that women are really smaller-minded, weaker-minded, more timid and vacillating, but that whosoever, man or woman, lives always in a small, dark place, is always guarded, protected, directed and restrained, will become inevitably narrowed and weakened by it.”

“The first duty of a human being is to assume the right functional relationship to society – more briefly, to find your real job, and do it.”

“A house does not need a wife any more than it needs a husband.” 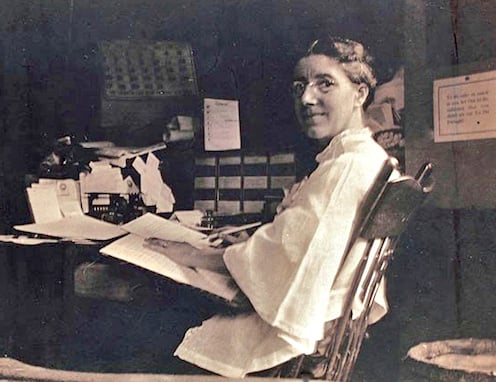 “In a sick society, women who have difficulty fitting in are not ill but demonstrating a healthy and positive response.”

“And woman should stand beside man as the comrade of his soul, not the servant of his body.”

“In our steady insistence on proclaiming sex-distinction we have grown to consider most human attributes as masculine attributes, for the simple reason that they were allowed for men and forbidden to women.”

“The labor of women in the house, certainly, enables men to produce more wealth than they otherwise could; and in this way women are economic factors in society. But so are horses.”

“There is no female mind. The brain is not an organ of sex.  Might as well speak of a female liver.” 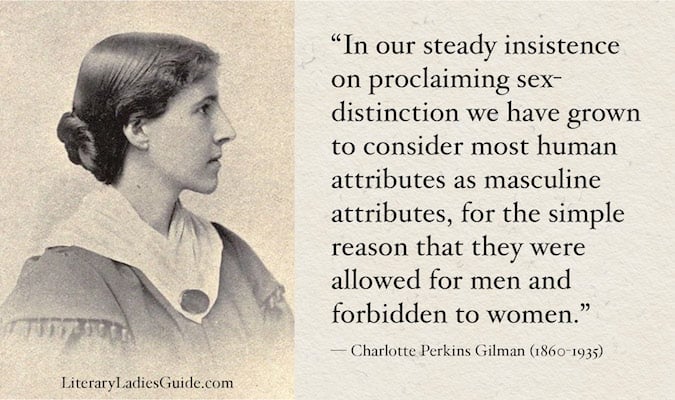 Not opposed to motherhood; rather to domestic servitude

Charlotte Perkins Gilman wasn’t anti-motherhood. Rather, she was opposed to a culture that insisted that domestic servitude was the role of women. In Women and Economics (1898) she wrote:

“It is not motherhood that keeps the housewife on her feet from dawn till dark; it is house service, not child service. Women work longer and harder than most men, and not solely in maternal duties. The savage mother carries the burdens, and does all menial service for the tribe. The peasant mother toils in the fields, and the working-man’s wife in the home.

Many mothers, even now, are wage-earners for the family, as well as bearers and rearers of it. And the women who are not so occupied, the women who belong to rich men,– here perhaps is the exhaustive devotion to maternity which is supposed to justify an admitted economic dependence.

But we do not find it even among these. Women of ease and wealth provide for their children better care than the poor woman can; but they do not spend more time upon it themselves, nor more care and effort. They have other occupation.

In spite of her supposed segregation to maternal duties, the human female, the world over, works at extra-maternal duties for hours enough to provide her with an independent living, and then is denied independence on the ground that motherhood prevents her working!” 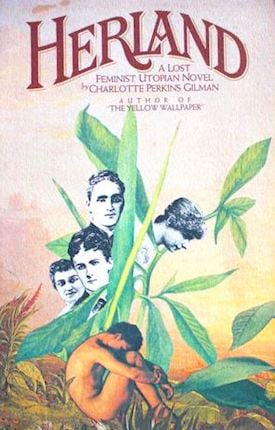