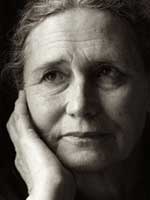 Doris Lessing, (October 22, 1919 – November 17, 2013) was a British novelist, playwright, poet, short story writer, and biographer. One of the most revered voices in modern literature, she has written intelligently and passionately about politics, parenting, aging, love relationships, and feminism.

She was born Doris May Tayler in what was then Persia (present-day Iran) to British parents, Captain Alfred Tayler and Emily Maude Tayler. When she was five, her parents moved with her to Rhodesia (what is now Zimbabwe) to farm crops on one thousand acres of land.

Observing the strife caused by the British in their colonial rule of the African nation, she developed a strong moral compass and political bent.

Lessing attended the Dominican Convent High School, a Roman Catholic convent for all girls in the Southern Rhodesian capital of Salisbury (what is now Harare). Afterward, she attended Girls High School in Salisbury and dropped out of school at the age of thirteen. She received no further formal education, though she self-educated from then on.

While still in her teens, she held a number of jobs to piece together a living. She worked at various times as an office worker, nursemaid, and journalist. When at age fifteen she got one of her first jobs as a governess, her employer gave her books on politics and sociology to read. She started writing stories, and not long after, successfully sold two to magazines in South Africa.

Lessing moved to Salisbury in 1937 to work as a telephone operator and met her first husband, Frank Wisdom. She married at age nineteen and soon after had a son, John, born in 1940, and a daughter, Jean, born in 1941. She felt trapped and left the marriage in 1943.

After the divorce, she developed an interest in the Left Book Club. This organization was where she met her second husband, Gottfried Lessing. They married and had their first child, Peter, born in 1946.

The marriage also didn’t last. Three years after the birth of her son, they divorced. During their marriage, she had a love affair with RAF serviceman John Whitehorn, brother of journalist Katherine Whitehorn. He was stationed in Southern Rhodesia and she wrote him about ninety letters between 1943 and 1949.

In 1949, Lessing moved to London with her youngest child, leaving her older two children in South Africa with their father. She wanted to pursue her writing career and socialist beliefs. She believed that she couldn’t be a good parent to her children, saying:

“For a long time I felt I had done a very brave thing. There is nothing more boring for an intelligent woman than to spend endless amounts of time with small children. I felt I wasn’t the best person to bring them up. I would have ended up an alcoholic or a frustrated intellectual like my mother.”

Since she was fifteen years old, Lessing sold her stories to various magazines. Her earliest works were African Stories (1948) and Going Home (1949). These semi-autobiographical stories were set in the Africa of her youth, a continent with which she had a love-hate relationship. 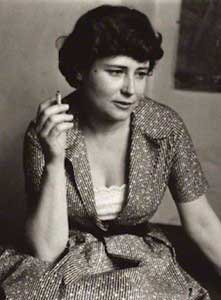 The Grass is Singing and The Golden Notebook

With the publication of her first novel, The Grass is Singing (1950), Lessing cemented her foothold as a writer. Semi-autobiographical and somewhat philosophical, the book was an immediate success. Set in Rhodesia, it’s the first of her five-novel series referred to as Children of Violence.

The Golden Notebook (1962) was her breakthrough novel, earning much international attention, especially among feminists. She later became something of an icon and the book is considered a “feminist bible.” The Swedish Academy praised it for being “a pioneering work” that “belongs to the handful of books that informed the twentieth-century view of the male-female relationship.”

Through the eyes of the protagonist, Anna Wulf, The Golden Notebook looks at feminist politics, the writer’s life, and what it means to be female. Anna’s struggles in a patriarchal world struck a chord at a time when second-wave feminism was barley nascent.

Lessing’s foray into science fiction seemed quite a departure from the political and feminist themes of her other novels, but it was all of a piece. She wove the subjects that she was passionate about into her speculative works as well,  notably, the five-book “Canopus in Argos” series.

In Charlie Jane Anders’ 2013 obituary of Doris Lessing in Gizmodo, she wrote:

“Seriously, if you want to write science fiction or fantasy, and you’re interested in learning how to capture the difficult niggly bits of people’s inner lives and their interactions with other people — then you absolutely must read Lessing, both her science fiction and her other stuff. We talk a lot about the importance of world-building in making readers believe in the setting of your story — and Lessing was a master of drawing you into a world and making it feel urgent and real.” 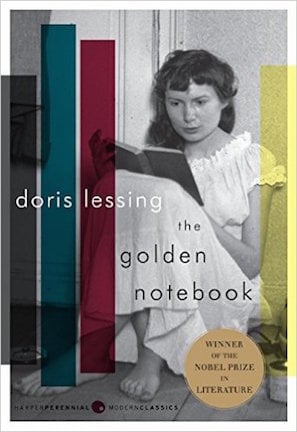 Lessing has over fifty books in various different genres. Her writing focuses on the living conditions, behavioral patterns, and historical developments of the twentieth century.

Her most famous novel, The Golden Notebook, focuses on a woman’s life situation, sexuality, political ideas, and daily life. Some of Lessing’s works delve into the future as she portrays civilization’s final hour from the eyes of an extraterrestrial observer. 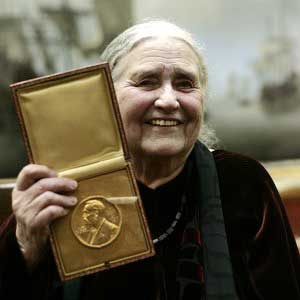 When she won the Nobel Prize for Literature in 2007 the jury described her as “that epicist of the female experience, who with skepticism, fire, and visionary power has subjected a divided civilization to scrutiny.”

Lessing was the was the eleventh women and oldest person to receive the award at age eighty-eight. In 2008 The Times put her at number five in the list of “The 50 Greatest British Writers since 1945.”

Doris Lessing long used her platform as an outspoken opponent of apartheid in South Africa, and spoke regularly about the subject. She practiced Sufism, a branch of Islam.

Other awards and honors

In 1971, Lessing was awarded the Man Booker Prize for her work Briefing for a Descent into Hell, published in 1971. She was awarded this prize a second time in 1981 for her science fiction novel, The Sirian Experiments (1980). She was later given the same award in 1985 and 2005 for other works.

In 1977, Lessing declined an Order of British Empire Award, saying the “Empire is non-existent.”

In 1997, Lessing was awarded the National Book Critics Circle Award for Biography/Autobiography for her novel, “Walking in the Shade: Volume Two of My Autobiography–1949-1962”.

In 2001, Lessing won the Prince of Asturias Award for Literature. Those who gave her the award stated that she was “the creator of an imaginary, everyday world, and her characters, the offspring of contemporary society, are a faithful reflection of twentieth-century morals.”

The death of a beloved writer

Lessing suffered a stroke in the late 1990s and caused her to stop traveling. Though she was unable to go far, she was still able to attend the theatre and opera. It seemed though she was preparing for her death, asking herself, for instance, if she would be around long enough to finish a new book.

Major Works
Doris Lessing was incredibly prolific; the list of her work below represents but a fraction of her output, as she wrote a great deal of nonfiction as well.