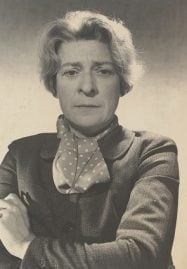 Janet Flanner (March 13, 1892 – November 7, 1978) was an American writer and journalist who spent much of her career writing as Paris correspondent for The New Yorker.

Under the pen name Gênet, she authored the magazine’s “Letter from Paris” for almost fifty years.

She was a prominent member of the expatriate community that settled in Paris between two World Wars, and made her home there until 1975, after which she returned to New York. Portrait at right, Janet Flanner in 1940 (National Portrait Gallery).

Janet Flanner was born in Indianapolis, Indiana, to Frank and Mary Ellen Flanner (née Hockett), both of whom were Quakers. Frank was a successful businessman, co-owning a mortuary and running the first crematorium in the state of Indiana. He also speculated in real estate. Janet was the middle child between her two sisters, Marie and June Hildegarde (known as Hildegarde.

The family was comfortably middle-class, enjoying the trappings of suburban life. All three girls attended Tudor Hall, a respected private school. Mary Ellen was known as a poet and playwright, and Frank was heavily involved in the local community.

Later, Hildegarde would recall, “We had a wonderful childhood. We were not rich, and we were not poor. And we did not lead dull lives. Mother was always putting on some kind of dramatic performance for family and friends, and Father had taste and liked to buy things…”

However, there were tensions under the surface. Mary Ellen was often frustrated at family life, and at times even resented her children and their talents in music, literature, and drama. She once told Hildegarde that, between them, they had “robbed her of all her talent.”

Later, Janet informed her mother that her decision not to have children was partly due to her belief that children had ruined Mary Ellen’s life, and in fact, Mary Ellen’s frustrations were often taken out on Janet, who was a precocious child who liked to do things her own way. Often, she was locked in the closet as punishment.

On February 17, 1912, the entire community was shocked when Frank killed himself at his mortuary. The family had just returned from a year spent largely in Berlin, where Marie was studying music, but had to return when Frank lost about $5,000 backing an invention that resembled the teletype machine.

Despite his property portfolio and the expanding mortuary business, he still felt the loss keenly. The man that most people knew as kind, good-natured and a pillar of the community became despondent, irritable, and unreliable, and he eventually took his life with a combination of prussic acid, strychnine, carbolic acid, and morphine. It became a local scandal, and the gossip and speculation would haunt Janet for the rest of her life.

In an attempt to escape the now stifling confines of the middle-class community, Janet enrolled at the University of Chicago. The city was buzzing with artists and writers, and Janet rejected the traditional university societies in favor of the clubs, bars, and theatres the city had to offer.

She had no real interest in classes, barely attending, and failed various courses, including political economy, psychology and English. She withdrew in 1914 and returned to Indianapolis. Later, she would say that she had dropped out because of her father’s suicide; even after two years, continued grief and confusion may have impacted her decision.

Once home, she took up her first writing post as film critic for the Indianapolis Star. She had kept in touch with some of her friends from university, in particular William Lane Rehm, who graduated in 1914. In 1918, to the surprise of all their family and friends, the two decided to get married.

There was little formality and even less notice: the engagement was announced only two days before the wedding. The ceremony was conducted at the Flanner home. 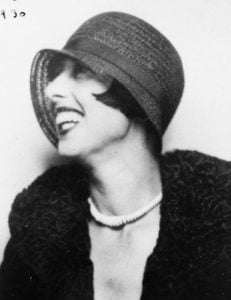 By August 1918, the couple was living in New York City, in an apartment on Washington Place in Greenwich Village. Janet was determined to live as independently as she could, and even had a prenuptial agreement drawn up with Rehm stating that neither would lay claim to the other’s finances in the event of a divorce. She had an income from her father’s estate, her own social life and standing; and Rehm was supportive of her.

Later Janet would fondly say that Rehm was “too good for me.” Known for her wit, she was quickly accepted into the social circles of the Village. She became close friends with Neysa McMein, one of the highest-paid magazine illustrators in the country, and with Harold Ross and Jane Grant, both well-respected journalists and editors.

Janet’s life was to change when, in December of 1918, Solita Solano (née Sarah Wilkinson) moved to New York as the new drama editor for the New York Tribune. When the two women met, sometime during the winter, they fell in love. However, even in the bohemian atmosphere of Greenwich Village, it became clear that social conventions would not allow the two women to fully lead the life they desired.

In the summer of 1921, they were given an opportunity when Solita was asked to travel to Greece for National Geographic magazine. With Janet’s income and Solita’s salary, they could survive financially. It was the escape they had been looking for. While Janet wavered, ridden with guilt over Rehm (whom she would eventually divorce amicably), Solita was insistent, and Janet would always be grateful that Solita had persuaded her to leave. 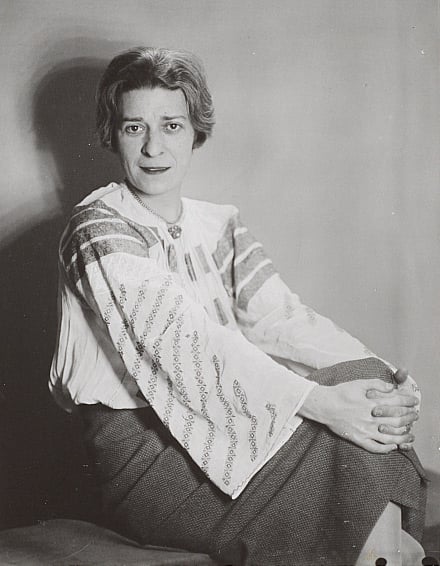 Settling in Europe, and Letters from Paris

After traveling through Europe, Janet and Solita found themselves in Paris. With no desire to return to America, they settled on the Left Bank, then a haven for expatriate artists and writers. Solita continued to write and edit for various magazines, while Janet worked on her first and only novel, The Cubical City, and entrenched herself into the social fabric of Left Bank life.

Janet and Solita became close friends with many of the most prominent members of the community, including Gertrude Stein and Alice B. Toklas, Natalie Barney, Djuna Barnes, Ernest Hemingway, and F. Scott Fitzgerald.

In 1925, after her old Greenwich Village friend Harold Ross launched The New Yorker, he and his wife Jane Grant were on the lookout for contributing journalists. He particularly wanted a regular European viewpoint for the magazine, and Jane approached Janet with the idea of a bi-weekly Letter from Paris. Janet took the offer and, writing under the pen name Gênet, would continue to write for The New Yorker for the next fifty years.

Her letters covered everything she felt her readers should know about what was going on in Paris and what the French thought of it all. She wrote about art exhibitions, fashion shows, theatre, music, literature, crime, current affairs (although she never felt that comfortable writing about politics), and celebrity gossip. Her prose came to epitomize what has since become known as “The New Yorker style” — sharp, witty, to the point, with little room for personal opinion.

Although she left Paris during World War II, she continued to write articles and profiles for the magazine, gathering information from her friends that had stayed behind. She didn’t return to Paris until 1944, when she covered the liberation of the city and also contributed a series of weekly radio broadcasts for the Blue Network. 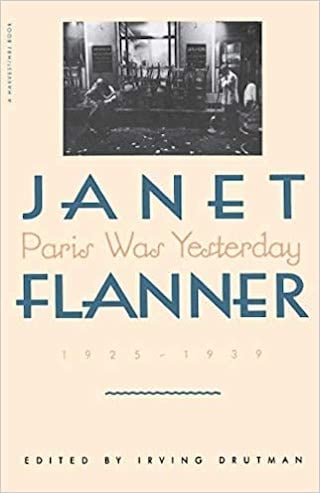 Janet’s personal life was never settled. In 1932, while in Paris, she met and fell in love with Noël Haskins Murphy, a singer who lived just outside Paris in Orgeval. Their romance didn’t affect her relationship with Solita (who also had affairs of her own), and Orgeval itself became an important escape for Janet. She felt the pressures of her position keenly and often doubted her ability as a writer.

While in New York in 1942, she met Natalia Danesi Murray, an Italian working at the National Broadcasting Company, at a party on Fire Island. The two were quickly smitten and, although their relationship would last until Janet’s death, Solita and Noel also continued to be important in Janet’s life. She found herself unable to break with any of her lovers, and it would cause her much guilt and anguish over the years, never feeling that she could give any of them what they deserved.

After returning to Paris, Janet frequently traveled back and forth to America to see Natalia and to care for her mother. Now elderly and frail, Mary Ellen Flanner lived in California with Janet’s sister Hildegarde, now a well-known poet.

She was unwilling to give up her position at The New Yorker to move back to America permanently, but the constant travel took its toll; she grew exhausted and was unwell and irritable much of the time. Even after her mother died, in 1947, Janet continued her trips to the U.S. at least once or twice a year.

Between travels, Janet continued her regular Letter from Paris, as well as contributing longer articles about the Nuremberg Trials, the Suez Crisis, the Soviet invasion of Hungary, and the Algerian conflict.

Only much later, in 1975, did she concede that the situation was no longer tenable. Her health was frail, and Noel and Solita were no longer able to look after her in Paris. Janet returned to New York permanently to be cared for by Natalia; a month later Solita died.

Janet grew more and more confused and frail, finally passing away of unknown causes on November 7, 1978. Her ashes were scattered over Cherry Grove on Fire Island, where she and Natalia had met. 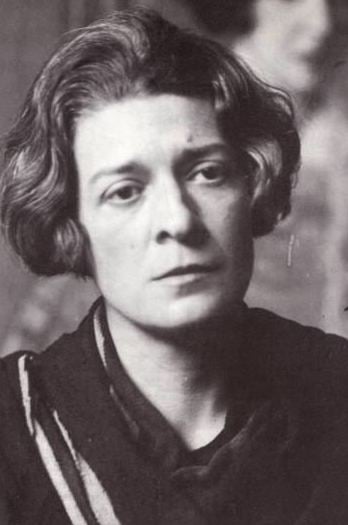 Janet Flanner was an intrinsic part of the history of The New Yorker, defining a style and a generation through her Paris letters. Many of her contributions can still be read on the magazine’s website, and Paris Was Yesterday is still popular, having been reissued by Virago Modern Classics.

During her lifetime, Janet Flanner’s work was recognized with a Legion d’Honneur and an honorary doctorate from Smith College. Her letters for The New Yorker were collected in various volumes, and Paris Journal won a U.S. National Book Award in 1966.

Her legacy is still very much in evidence: In 2019, Park Tudor School (the successor to Tudor Hall School), posthumously awarded her their Distinguished Alumni award, and also created a speaker series called the “Janet Flanner Visiting Artist Series.”

She is also credited as being one of the inspirations behind the 2021 film The French Dispatch. But she didn’t want to be known only as a journalist. She was a woman who cared deeply for those around her and for her friends. After her death, Kay Boyle recalled Janet’s own words: “When I die, let it not be said that I wrote for The New Yorker for fifty years. Let it be said that once I stood by a friend.”