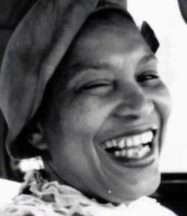 Zora Neale Hurston was a popular figure throughout the era of the Harlem Renaissance as a writer and anthropologist. She made waves as the first black student at Barnard college and one of the first people to conduct studies with a true folk-lore perspective.

Even as she had many professional connections and had a confident and humorous personality, Hurston struggled with economic stability throughout her life.

“Financial dependency is the thread that sewed a cloud over Hurston’s life, from the time she left home as a maid at 14 to the day of her death”  — from Alice Walker’s introduction to I Love Myself When I am Laughing

Supporting herself with odd jobs

Throughout her life Zora worked in a variety of jobs, including field work, domestic labor, as a chauffeur manicurist, and secretary for her friend and colleague Fannie Hurst.

After the death of her mother and rejection by her father and stepmother, Zora, who was the fifth of eight children, began living and working on her own. At the age of 14, she began working as a domestic for the traveling Gilbert & Sullivan theatrical company.

Education was important to Hurston and she found ways to study despite financial instability. Zora’s high school career was paid for based on her age, which she forged in order to attend (she claimed to be 16 when she was actually 26).

Her literary friends, including writer Fannie Hurst and Barnard trustee and founder Annie Nathan Meyer, who she met at Opportunity magazine’s 1925 literary awards dinner, helped her enroll into Barnard college with a full scholarship.

When Zora arrived in New York City in 1925, the Harlem Renaissance was in full swing, though when she arrived, she had no connections, no job and no money.

Due to her outgoing personality, it didn’t take long for her to connect with other young black writers such as Langston Hughes and Wallace Thurman and worked together on Fire!! the literary magazine. At the same time, she pursued an anthropology degree at Barnard and was involved in performing arts.

Zora moved back to her home state of Florida for six months (1927) to work on a research fellowship supervised by Columbia University’s anthropology department. It pledged a salary of $1,400, but Carter G. Woodson, the project overseer only gave her half due to a disappointment in her performance.

While Hurston presented and practiced as a historian and was more interested in the substance, her project manager was concerned with the style of folklore.

Wealth in all ways but financial

Though she was never comfortable financially, Zora lived a life of wealth through her personal friendships, travels and experiences. Like many other artists, her work wasn’t completely  appreciated until after her death.

Her work was widely published in a variety of periodicals, magazines and books, however, she was not compensated as well as she could have been. Were it not for her continual struggles with financial matters, she may not have ended up destitute and forgotten. Fortunately for us all that she was rediscovered, to be read and valued as she should be.