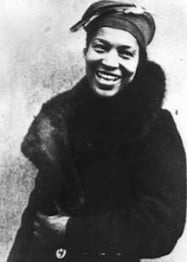 “Crazy for this Democracy” is a biting, tongue-in cheek essay by Zora Neale Hurston, first published in The Negro Digest, December, 1945. You can now find it in full in I Love Myself When I Am Laughing: A Zora Neale Hurston Reader.

It was written at a time when, after having served the country overseas to fight tyranny, black servicemen and women returned home to a land where they still didn’t have the basic rights they’d fought for abroad. Segregation was still the rule rather than the exception in education, employment, housing, and more. Here’s a sampling of quotes from this essay:

I declare, I sure will try it …

They tell me this democracy form of government is a wonderful thing. It has freedom, equality, justice, in short, everything! Since 1937 nobody has talked about anything else. The late Franklin D. Roosevelt sort of redecorated it, and called these United States the boastful name of “The Arsenal of Democracy.”

The radio, the news papers, and the columnists inside the newspapers, have said how lovely it was. All this talk and praise-giving has got me in the notion to try some of the stuff. All I want to do is to get hold of a sample of the thing, and I declare, I sure will try it. I don’t know for myself, but I have been told that it is really wonderful. 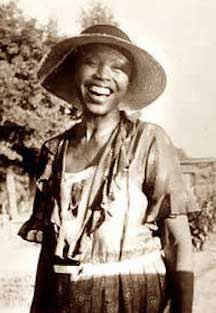 If we’ve sacrificed  billions of dollars and millions of men …

… I accept this idea of democracy. I am all for trying it out. It must be a good thing if everybody praises it like that. If our government has been willing to go to war and to sacrifice billions of dollars and millions of men for the idea, I think that I ought to give the thing a trial.

Just get rid of those Jim Crow laws

The only thing that keeps me from pitching headlong into the thing is the presence of numerous Jim Crow laws on the statute books of the nation. I am crazy about the idea of this democracy. I want to see how it feels. Therefore I am all for the repeal of every Jim Crow laws in the nation hearing now. Not in another generation or so. The Hurstons have been waiting eighty years for that. I want it here and now.

And why not? A lot of people in these United States have been saying all this time that things ought to be equal. Numerous instances of inequality have been pointed out, and fought over in the courts and in the newspapers. That seems like a waste of time to me.

These Jim Crow Laws have been put on the books for a purpose, and that purpose is psychological. It has two edges to the thing. By physical evidence, back seats in trains, back-doors of houses, exclusion from certain places and activities, to promote in the mind of the smallest white child the conviction of First by Birth, eternal and irrevocable like the place assigned to the Levites by Moses over  the other tribes of the Hebrews. Talent, capabilities, nothing has anything to do with the case. Just FIRST BY BIRTH.

The flavor must be good

I have been made to believe in this democracy thing, and I am all for tasting this democracy out. The flavor must be good … I crave to sample this gorgeous thing. So I cannot say anything different from repeal all Jim Crow laws! Not in some future generation, but repeal now and forever!!

There’s a lot more to this essay, and it’s worth reading in its entirety. It’s in the book I Love Myself When I am Laughing … A Zora Neale Hurston Reader (© 1979, edited by Alice Walker), which features many other essays and excerpts from Hurston’s fiction.