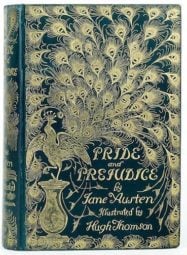 Emily Dickinson once famously remarked that if she felt as though the top of her head were taken off, she knew she was reading poetry. And who among us did not read, “It is a truth universally acknowledged …” and feel our heads explode?

So, if Jane Austen has been hiding her poet self in prose, how better to acknowledge the power of her collective one-line poetry than by translating all of Pride and Prejudice’s 61 opening-sentence poems into contemporary twists on the classic Japanese 17-syllable haiku?

In the early 80s, I experienced a somewhat predictable, spiritually deracinated-Westerner, child-of-the-60s fascination with Zen Buddhism. I even flirted with the idea of becoming a monk. In the process, I studied haiku, ikebana, and kendo — all with varying degrees of success. But the haiku is the experience that has stayed with me throughout my career as a writer and poet.

The classic haiku is an image conveyed with an economy of brushstrokes consisting of words, counted in syllables (3 lines; 5 syllables / 7 syllables / 5 syllables). The poem contains a duality of message (such as joy in the moment coupled with sadness at its transient nature), and attempts to answer three questions:

In writing this book, I had the pleasurable experience of encountering familiar text in a new way, resulting in unexpected discoveries. Among many, here are three of my favorites:

It is a truth universally acknowledged, that a single man in possession of a good fortune, must be in want of a wife.

Although I had known that the essential action of Pride and Prejudice happens over the course of a year, it wasn’t until I looked at all the “When?” answers throughout the novel that I understood that the book begins and ends in hunting season. Mr. Bingley arrives at Michaelmas (September 29) in search of birds to shoot, but he and Mr. Darcy are the real game. And the book ends with three of the Bingley sisters married. Only two more to go! *

Happy for all her maternal feelings was the day on which Mrs. Bennet got rid of her two most deserving daughters.

Elizabeth, as they drove along, watched for the first appearance of Pemberley Woods with some perturbation; and when at length they turned in at the lodge, her spirits were in a high flutter.

Pemberley produced
a flutter effect. Could this
be real (-estate) love?

Elizabeth Bennet, as we all know, is not a flutterer — and this is the only time in the book the word appears to describe her. This makes sense when considered as part of the answer to the “What?” Why use a word more familiarly reserved for heroines who find themselves about to swoon from a sudden attack of love at first sight?

Because this is when Austen reveals that Elizabeth has fallen in love with Darcy — not because of any romantic Colin-Firth-in-a-wet-shirt moment, but as she begins to realize the sense of order Pemberley represents, the purpose Darcy fulfills as its master — and what it might mean to join him in his duties.

Elizabeth has indeed fallen in love at first sight and therefore is in a “high flutter” — but the object of her emotion is a stately home, order established by architecture, coming into view as she drives through the untamed nature of Pemberley Woods. Here’s more about “the flutter effect.” 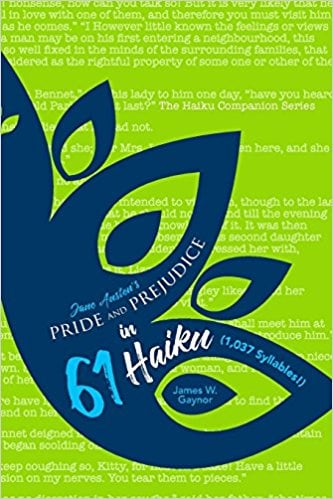 Pride and Prejudice in 61 Haiku by James Gaynor on Amazon

One morning, about a week after Bingley’s engagement with Jane had been formed, as he and the females of the family were sitting together in the dining-room, their attention was suddenly drawn to the window, by the sound of a carriage; and they perceived a chaise and four driving up the lawn.

Lady Catherine
was unwelcome everywhere.
That never stopped her.

Until I paid attention to the “Where?” of the chapter’s opening line, I had never fully appreciated that Lady Catherine’s enormous carriage — powered by four horses carrying a groom, a driver, Lady Catherine and (probably) her daughter — arrives at Longbourn and drives up the lawn! The damage to the turf must have been extensive, but of no concern to Lady C. “Shades of the guillotine,” as one of my academic readers wryly remarked. 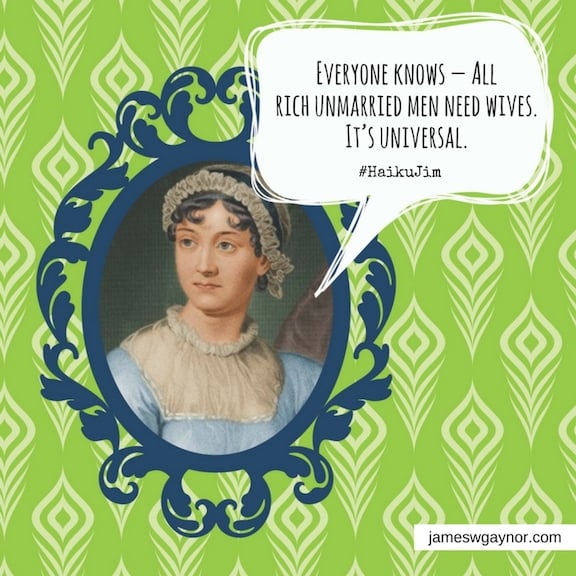 More about Pride and Prejudice in 61 Haiku

My original intention was to replace the haiku’s traditional duality of emotion with an ironic twist conveyed by the narrator, challenging the usual seriousness (and rigidity) of literary criticism. But as I began to create my haiku-summaries, I found that a somewhat unexpected voice emerging. I began to hear what might be Austen’s acidic feminine wit blending with my 21st-century masculine sensibility.

And that voice introduced me to a new appreciation of Austen’s poetic use of the opening line in all the chapters of Pride and Prejudice. It is my hope that readers of my book will hear that voice and find themselves smiling knowingly from time to time as we travel together in a redesigned Japanese vehicle across Austen’s familiar English landscape.

James W. Gaynor (#HaikuJim) is a poet, artist, editor, and writer. A graduate of Kenyon College, he lived in Paris, where he taught a course on Emily Dickinson at the University of Paris, studied the development of the psychological novel in 17th-century France, and worked as a translator.

As #HaikuJim, Gaynor is a regular columnist for OTVmagazine.com, where his haiku commentaries have a devoted following. His collection of poetry, Everything Becomes a Poem, was published in 2016 (Nemeton Press) and won the 2017 American Graphic Design Award for its creative interplay of design and text.

He also leads a haiku workshop (Can You Haiku?), which uses 17th-century Japanese poetry techniques to improve digital communications. Jane Austen’s Pride and Prejudice in 61 Haiku (1,037 Syllables!) is his latest book (Nemeton Press).

2 Responses to “Three things I learned writing Pride and Prejudice in 61 Haiku (1,037 Syllables!)”