How Betty Smith Came to Write A Tree Grows in Brooklyn, in Her Own Words 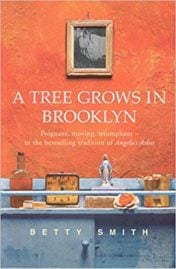 How many of us have read and re-read A Tree Grows in Brooklyn? It’s one of those books that can be revisited at various stages in life and seen from a different perspective each time. Granted, none of Betty Smith‘s other three novels achieved quite the same success as A Tree, but they share the unifying themes of struggles in an urban setting, and above all, family bonds.

After years of struggling to be a successful novelist (she had already achieved a measure of success as a playwright), Betty Smith struck literary gold, drawing on her own experience as the child of poor immigrants at the turn of the twentieth century.

This coming-of-age story, set in early 1900s Brooklyn, is seen from the perspective of down-to-earth  Francie Nolan. She has neither the cleverness nor beauty usually conferred to heroines of novels. She possesses a relatable kind of awkwardness, but her quiet courage and perseverance in the face of poverty and other obstacles endear her to the reader.

Members of Francie’s immediate and extended family populate this novel with complex, sympathetic characterizations. About the tree that inspired the title:

“For Betty Wehner … the tree that grew outside her bedroom window was much more than merely a sight for sore eyes. It was an ailanthus, a hardy variety of Chinese sumac renowned for its tenacity. It flourishes best, a New York poet once remarked, amid ‘dead vine leaves, a cigarette butt, and a paper clip.’

Young  Betty, herself a budding poet, saw the tree as a symbol of survival, a living reminder of her own struggle to escape the pain and poverty of Williamsburg.” (from the introduction to the 1989 edition)

It’s always fascinating to learn how an author came to write a book that has become a beloved classic, especially in their own words. In the 1943 essay that follows, Betty Smith tells in her own words how she came to write A Tree Grows in Brooklyn. The following essay was adapted from “How the Tree Grew” by Betty Smith, © 1943.

When people ask me how I came to write A Tree Grows in Brooklyn, my answer depends on the kind of refreshment I’m having at the moment. If the place is a crowded living room filled with hatted and gloved ladies and I’m holding  a cup of pale tea in one hand and trying to hold a baby sandwich, napkin, petit four, and a cigarette in the other hand, I reply this way:

“I read so many stories and novels whose locale is claimed as Brooklyn. All were disappointing because they were about a city I didn’t recognize — a place whose inhabitants were too glibly characterized by their penchant for saying ‘skoit,’ ‘goil,’ and ‘erl boiner.’ It came to me that Brooklyn is not a city. It is a faith. You have to be born a Brooklynite; you cannot become one.

Brooklyn is town of dark mystery and violent passes and gentle ways. There are astonishing customs and rituals of living hidden away from the outsider. Well, I am a Brooklynite. I know of these hidden things. One day I went out and bought a ream of paper and started to write a novel about my city.” That’s my story over teacups. 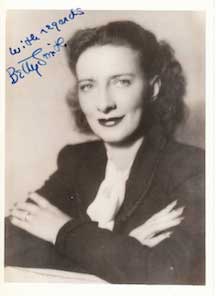 In a college drugstore over milkshakes

Crowded in a student-filled booth in Chapel Hill’s college drugstore, drinking a chocolate milkshake out of a jumbo paper cup, and taking part in the violent pro and con talk about the merits of the writing of Carolina’s most famous literary alumnus, Thomas Wolfe, I answer the question this way:

“I wrote this novel because I’m a Tom Wolfe in reverse. You see, he was born in North Carolina, was a member of the Carolina  Playmakers, studied playwriting with George P. Baker, and finally went to live in Brooklyn to write a novel about North Carolina.

Now I was born in Brooklyn. I studied playwriting with George P. Baker, I became a member of the Carolina Playmakers, and finally went to North Carolina to write a novel about Brooklyn.” That’s my milkshake version. 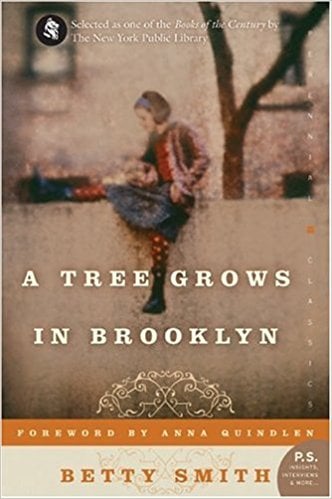 A Tree Grows in Brooklyn by Betty Smith on Amazon

Over coffee with Mama

I remember a further back origin when I sit with my mother in the cool kitchen of her Brooklyn home and we share a pot of midnight coffee together.

“It started when I was eight years old. I was playing in one of those Brooklyn streets one sunny afternoon and I saw a group of right-minded housewives throw stones at a mother who wasn’t married. I grew up wanting to protest in some way against intolerance. So you see, Mama, the beginning of this novel really started when, as a child, I began to notice the world of Brooklyn around me.”

And so it has been with me in all the years since I went away from Brooklyn. The pictures kept coming, tumbling over each other like eager acrobats, and they made a staggering pyramid of remembrances that grew higher with the years and threatened to topple over and bury me alive if I didn’t get them written down. And in the writing of the book my great problem was not what to set down but which of the myriad things to leave out.

And that’s how this novel grew to be written. 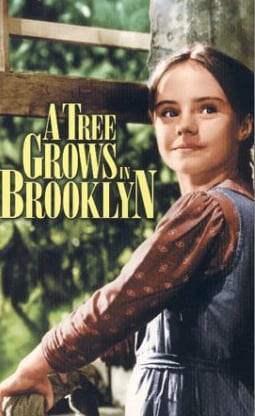 More about A Tree Grows in Brooklyn

7 Responses to “How Betty Smith Came to Write A Tree Grows in Brooklyn, in Her Own Words”