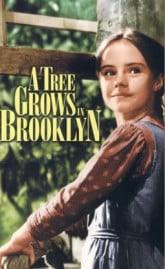 The 1943 film version of A Tree Grows in Brooklyn, adapted from the beloved book of the same title by Betty Smith, was widely acclaimed both by audiences and critics and won a number of awards.

However, contemporary readers who adore the book should note that the storyline covers about 6 years in the lives of the Nolans, while the film’s actions take place within a much shorter span of time — compressed into not much more than a year.

As such, this is a film that is an interpretation of the book, unlike Gone With the Wind  and others whose film versions remained  true to the book.

From the original article in The Havre Daily News, July 27, 1945:  Hailed as the perfect filming of a great best seller. Millions eagerly await film version of Betty Smith’s A Tree Grows in Brooklyn; choice of cast provoked nation-wide interest and speculation.

With the release of the eagerly awaited 20th Century-Fox film version of Betty Smith’s A Tree Grows in Brooklyn, the best-selling book in years will — judging by unprecedented Hollywood preview acclaim — become the best-loved picture of a lifetime.

The first copy of Betty Smith’s tender and heartwarming story of the Nolans of Brooklyn had not yet rolled off the presses when 20th Century-Fox acquired the screen rights at the urging of producer Louis D. Lighton.

Not since Gone with the Wind  has the casting of any picture provoked such nationwide interest and speculation as has A Tree Grows in Brooklyn.

The role of Katie is played by Dorothy McGuire; James Dunn is seen as Johnny Nolan; Joan Blondell is Aunt Sissy; Peggy Ann Garner is Francie; Ted Donaldson is Neeley; and Lloyd Nolan is Officer McShane.

Dorothy McGuire’s portrayal of Katie is one of the greatest achievements in all of Hollywood history. The wistful-faced, blue-eyed blonde zoomed to stardom as the zany young bride in “Claudia.”

Her current performance as the hardworking, sober-minded mother who toils so that her two children will “amount to something” establishes her has one of the most versatile dramatic actresses in filmdom.

Giving one of the most sensational performances in pictures, James Dunn, one of he top-ranking stars of the early 1930s, won the coveted role of Katie’s irresponsible singing-waiter husband. Critics are unanimous in the opinion that Dunn’s performance puts him in the running for an Academy Award.

The story of A Tree Grows in Brooklyn revolves around 13-year-old Francie Nolan. No role in the picture is more important. When Peggy Ann Garner was handed the part, she won the biggest child’s role ever written for the screen. Her deep, sensitive portrayal stamps her as Hollywood’s top juvenile star.

Ted Donaldson wins a substantial share of acclaim with his characterization of “Neeley,” while Lloyd Nolan adds to his already impressive repertoire with his performance as the police officer.

You may also like:
Francie Nolan: Coming of Age in A Tree Grows in Brooklyn